Our exclusive ranking of public high schools in Cabarrus, Mecklenburg, and Union counties

How and Why We Prepared the Ranking

As we have every year since 2009, we enlisted the help of statistician Zhi Zhang, a professor in the Department of Mathematics and Statistics at UNC Charlotte, to analyze the data and prepare the list. Our goal was to identify academically successful schools as well as schools that provide an environment conducive to exceptional learning.

It’s important to note that differences among schools on the list are often quite small—any school could fairly exchange places with another school one or two positions higher or lower. We offer these rankings not as the final word on school quality, but as a single tool in the decision-making and evaluation process for parents, students, and educators.

Not all high schools in this ranking are traditional high schools. We included these schools because we’d be remiss in leaving them out simply because they offer different curricula.

The list is based on two overarching criteria: environment and performance. The environment factor includes variables such as proportion of students enrolled in Advanced Placement, International Baccalaureate, or college classes; average class size; proportion of highly qualified teachers; and proportion of board-certified teachers. The performance factor includes variables such as average combined SAT score and four-year graduation rate. Schools that could not provide data for any one of the variables were not included in the analysis. For example, CMS’s Hough and Rocky River high schools are relatively new; they did not have a senior class last year. Therefore, no average SAT score was available, and we did not include those schools.

•    We made one small but potentially significant change in the data we used this year. In the past, we used the total number of board-certified teachers for each school. This year, we used the proportion of overall classroom teachers that are board certified.

•     Garinger’s New Technology School dropped the most, from 27th last year to 43rd this year.

First, two larger sets of variables were determined: the variables for the environment factor and the variables for the performance factor. For each variable of each set, we organized a separate comparison of all schools, with the smallest value in the ranking being the top-ranked school and the largest value being the bottom-ranked school. If there was a tie, each of the tied schools shared the lowest rank value of that tier. Collectively, these rank scores formed a basis for our analysis. There are several options in establishing scores for ranking purposes. We chose to rank scores because they tend to be more robust—if a school has an extremely low or high reading on a variable, that would not have an outsize effect on the school’s position in the overall ranking.

For each school, a weighted average of the two rank scores, one from the environment ranking and one from the performance ranking, was calculated with a weight of 0.25 on the environment and 0.75 on the performance. The overall ranking was then performed based on the weighted average rank scores among all schools. Schools in a tied tier share the lowest rank value in that tier. 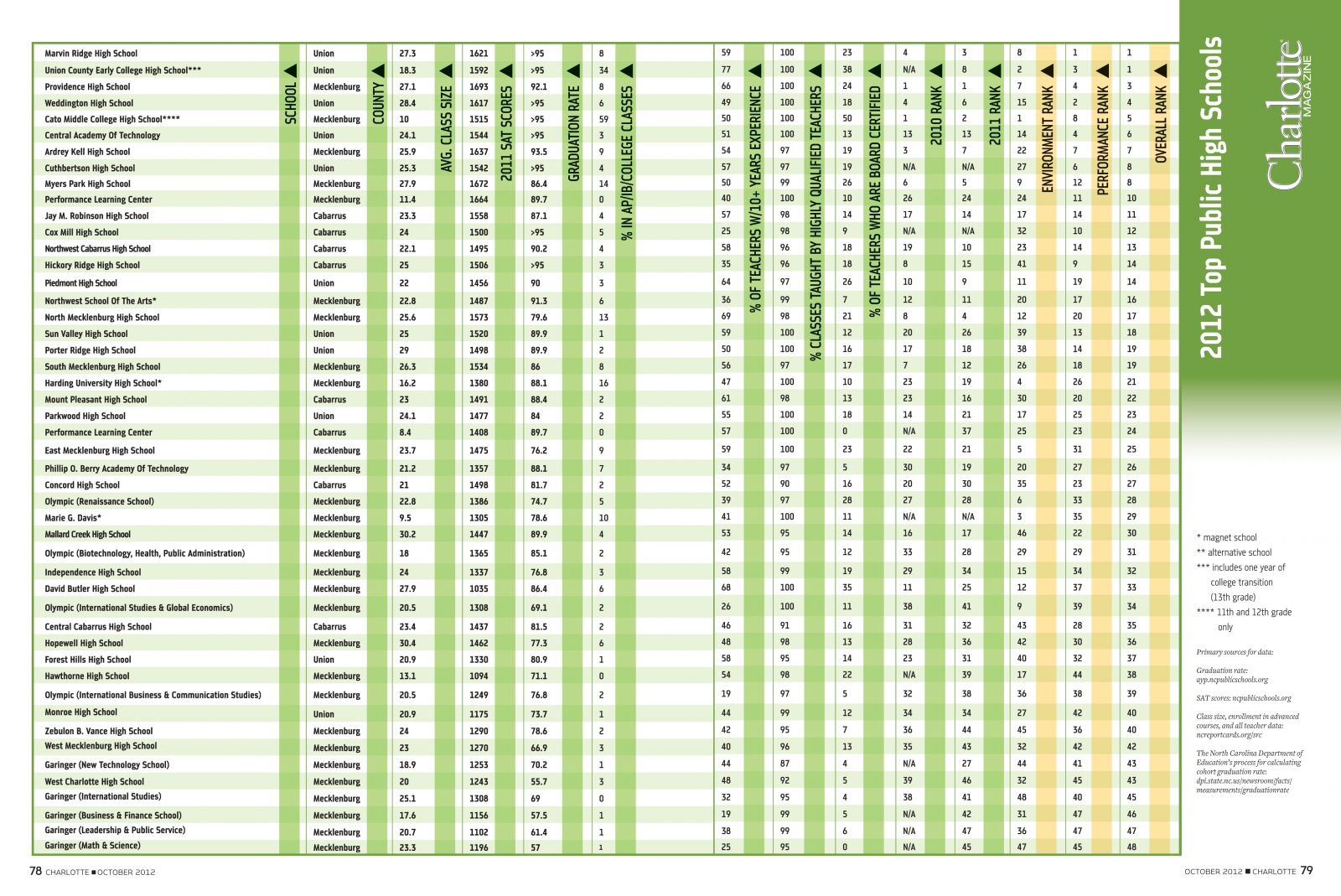 This article appears in the October 2012 issue of Charlotte magazine.
Categories: Feature, The Buzz