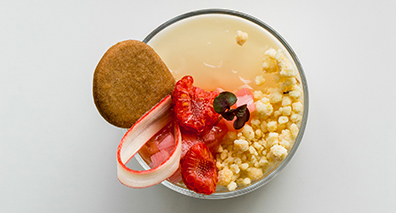 Desserts
300 East
Ashley Bivens Boyd is the untouchable queen of pastry in this town, but her apprentice, Miranda Brown, is learning quickly. With the two of them in the same kitchen, the desserts are getting better and better. Think classics, such as cheesecake and carrot cake, reimagined in ways that highlight each ingredient. 300 East Blvd.

Chicken Sandwich
The Asbury
You can order a chicken sammy fried or grilled—but pick grilled and we’ll send you back up north. House-made bread-and-butter pickles cut through the chicken’s grease, while country ham and cheese bring a pop of salt. Fast service and natural light make this a go-to spot for lunch meetings. 235 N. Tryon St.

Wine Dinners
The Fig Tree
Wine distributors clamor to hold dinners here, and people sign up to attend as soon as the events are announced. Chef/owner Greg Zanitsch has one of the most nuanced palates in the city when it comes to his paired menus. Take a bite, sip the wine, and then taste them each again. The flavors will change—along with your opinion on the importance of picking the right wines with dinner. 1601 E. 7th St.

Place to Celebrate
Kindred
Co-owner Katy Kindred admitted at a recent #discussCLT panel that the restaurant staff Googles the guests on their reservation list to help customize each experience. When you walk in the door, service is flawless, food is fantastic, and you’ll feel as though everything was done just for your special night—because it was. 131 N. Main St., Davidson.

Farm-to-Table
Fork!
Chef and owner Tim Groody was a pioneer of the Matthews Farmers Market, which helped spread the local food movement in this region. He hasn’t stopped pushing us to eat better, and his Cornelius restaurant serves local, organic, and sustainable as often as possible. You can taste the difference. 20517 N. Main St., Cornelius.

Gnocchi
Stagioni
There’s no secret ingredient that makes Chef Drew Dodd’s gnocchi stand out. It’s a classic recipe done right. The result is a flour and potato dough that’s soft but not chewy. It soaks up the flavors of whatever sauce it’s served with that night, without sacrificing its texture. 715 Providence Rd.

Ice Cream
​Cabarrus Creamery
There’s an ice cream for every season here, whether it’s wintertime peppermint or coconut in the summer. Your favorite desserts are recast as ice cream, too, such as banana pudding or birthday cake flavors. Cancel dinner and head straight for dessert—you can order your scoops sandwiched between house-made cookies for the ultimate treat. 21 Union St. S., Concord.

Brisket
Smoke Pit
The bark on this brisket in Concord is full of hickory flavor, and the red ring around the edge of each slice shows how long the meat stays in the smoker: 12 to 14 hours. The meat is tender, and its sauce has a bit of a kick. Mellow out the heat with a side of delicious, creamy mac-and-cheese, or double it up with spicy collard greens. 796 Concord Pkwy. N., Concord.

Barbecue Pork
​Midwood Smokehouse
​Midwood got a lot of attention last July when former President Obama and candidate Hillary Clinton stopped at the Plaza Midwood location. Naturally, some of that attention was good, and some of it was bad. One newspaper opinion column even claimed that their choice of city barbecue showed the Democrats’ disconnect with rural parts of the state. We see it from another angle: There may be no better sign that a barbecue restaurant has made it in North Carolina than when its smoked hog becomes a matter of political debate. Multiple locations.

Seafood
RockSalt
This restaurant, behind Park Road Shopping Center, had a bit of a rocky start when it opened in 2015, but Chef Jim Diecchio has brought stability to the seafood-focused menu since taking over the kitchen in 2016. Flavors are bright without being overpowering, and you can be sure the fish, which changes daily based on what’s in season, is fresh. Diecchio is married to a vegetarian, which means his side dishes get just as much attention. 512 Brandywine Rd.

Sushi
O-Ku
When you ask locals where to find the best sushi, the response has long been mixed. O-Ku is settling that debate. The makimono, or rolls, are created with harmonious flavors and contrasting textures in mind, while the maki comes from quality fish that’s been expertly cut by the chefs behind the sushi bar. Even better? Rolls are half-priced on Monday and Wednesday between 5 and 7 p.m. 2000 South Blvd., Ste. 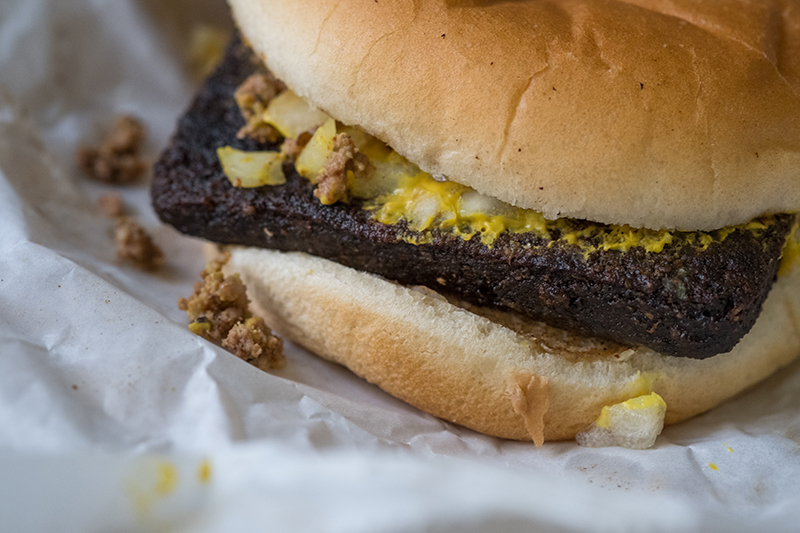 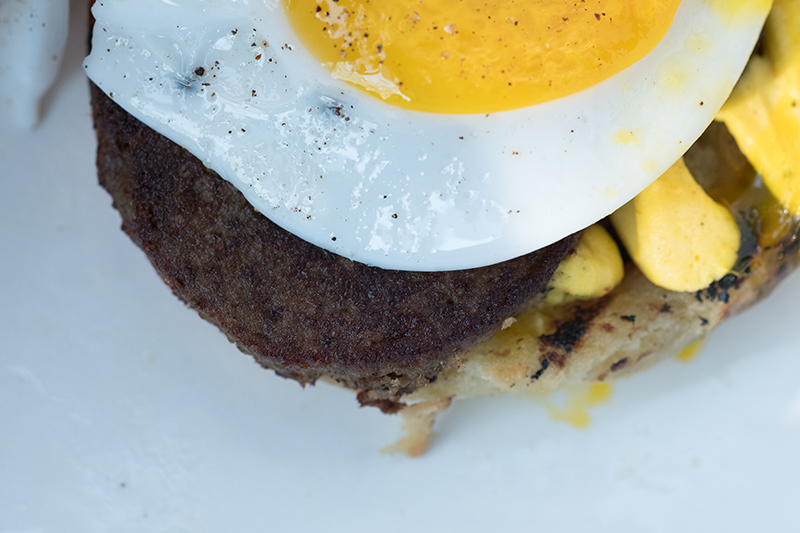 > SPLURGE: Livermush
littleSpoon
Livermush has never been so beautiful in Charlotte as it is in littleSpoon’s open-faced sandwich, topped with piped peaks of deviled egg filling, and an ooey, gooey fried egg. A dusting of local microgreens on top makes this breakfast sandwich a classy take on the classic. 2820 Selwyn Ave.

Kids’ Menu
Cowfish
Dragon Bitez. Ninja Nuggets. What kiddo wouldn’t be excited to eat those? But what truly makes little eyes wide is the bento box and the kid-friendly “sushi” for dessert—a bed of Rice Krispies topped with a Swedish Fish candy, wrapped in a strip of dried fruit “nori.” Parents also appreciate the healthy side options of carrots, fruit, and edamame. Plan ahead; the restaurant doesn’t take reservations. 4310 Sharon Rd.

French
Aix en Provence
The service here is attentive and unpretentious—among the warmest in town. Order the bouillabaisse, a seafood stew rich with saffron and Provençal herbs that could have easily come from the kitchen of a Marseille restaurant. The French are notorious for their leisurely meals, affairs that can (and do) stretch for hours. Follow their cue: Pour another glass of wine and linger over dessert. 545-B Providence Rd.

Fast Casual
​YAFO Kitchen
Frank Scibelli’s latest venture illustrates what quick-but-delicious restaurants can be. The Middle Eastern-inspired menu is fresh and flavorful. You can get in and out in a half-hour lunch break. And YAFO succeeds where other fast casual concepts fail: It doesn’t feel generic. 720 Governor Morrison St., Ste. 120.

Sandwich
Flipside’s Corner Grind
“Sandwich” is a tricky word. It defines plenty of unimaginative options around town. But why have boring turkey and cheese when you can bite into the saucy, chewy Stuffed Meatball Parm grinder at this downtown Pineville sub shop? 333 Main St., Pineville. 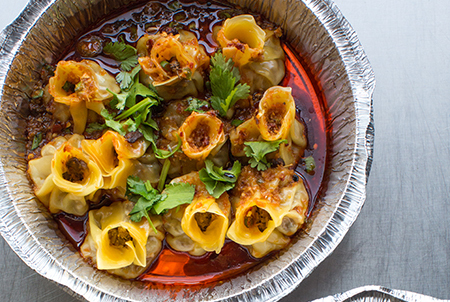 Chinese
Dumpling Lady
Zhang Qian’s food truck is a vehicle for sharing a story that began in China, where she lived until moving to Charlotte in 2015. The menu is limited, revolving around dumplings and noodles. But the freshness of the ingredients—many of which are sourced from the farmers’ market—and the pungent, bold spices set this street fare apart from the often bland and greasy alternatives around town.

Brunch
Vivace
When the weather’s nice, patrons vie for a table on the patio for alfresco dining with skyline views. But Vivace’s special—an appetizer, entrée, and brunch beverages, all for $25—tastes just as good indoors. Make an 11:30 a.m. reservation, pre-order your mimosa or bloody, and drink coffee while you wait for the clock to strike noon. 1100 Metropolitan Ave., Ste. 100.

Breakfast
@Dawn
The extra-crispy home fries, sprinkled with Chef Greg Collier’s special Tennessee seasoning mix, are reason enough to drag your butt out of bed. (We’ve ordered almost everything on the menu, and the rest is solid, too.) 2130 Ayrsley Town Blvd.

Editor's Note: @Dawn announced it would be closing the last weekend of April, but you can visit its sister restaurant, The Yolk, in Rock Hill. Chef Greg will be cooking there until a second location opens.

Coffee Lab
Hex Coffee
A craft beer shop seems an unlikely place to get your caffeine fix, yet Hex has inhabited South End’s Good Bottle Co. for the past year, emerging as the city’s best spot for espresso experimentation. It does pour-overs, lattes, and other standards, but it shines in such concoctions as the HEX Shandy: cold brew, lemon juice, mint, and sparkling water. 125 Remount Rd.

Live Music With Dining
Cajun Queen
Seven nights a week, a jazz band performs upstairs in the bar area, sending soft sounds around every square corner and into every hidden nook of this old house in Elizabeth. The spicy crawfish and shrimp étouffée comes in a bowl, so lean forward, take a scoop, and talk a little closer to your dining companion. 1800 E. 7th St.

Fried Chicken
Price’s Chicken Coop
People will always try to take away the crown. They’ll say this place or that place has better fried bird, probably because they just want to be different. Please. Price’s has been here since 1962, and the signature quarter-chicken dinner is as greasy and delicious as ever. And Price’s has one thing over all the others: You can’t claim to be a true resident of Charlotte unless you’ve been here. 1614 Camden Rd.

Oyster Selection
Sea Level
When Sea Level opened in early 2016, a group of watermen from the Core Sound in the “Down East” region of North Carolina made the six-hour drive to uptown to see for themselves. These were folks from families going back generations on the water, and they’ve had their livelihoods threatened by restaurants and shops that claim to sell “local” seafood that’s actually from distant waters. Sea Level owner Paul Manley was different. He spent several years building relationships and created a partnership with oyster and clam farmers to grow a type of oyster just for his restaurant. The oyster takes about 18 to 24 months to grow, and it’s served in the heart of a city that’s never been known for seafood. The restaurant fills out the oyster menu with varieties from around the United States, but there’s only one Sea Level oyster, and here’s one more local secret about it: You can get it for $1 from 4-7 p.m. Monday-Saturday. 129 E. 5th St.

Vegan
Luna’s Living Kitchen
Flooded with natural light, Luna’s open warehouse vibe persuades even the most dedicated carnivore to go meatless. The menu is completely vegan and raw, incorporating ingredients from local, organic farmers. Leave feeling energized, courtesy of a nutrient-packed meal, and surprised that you can feel so full without a slab of meat. 2000 South Blvd., Ste. 300.