2020 Charlottean of the Year: Bubba Wallace

NASCAR has always represented and celebrated people like him, uncomplicated country folks who careen around the track or cheer for those who do. But for a few weeks in summer, without really meaning to, Bubba Wallace became a symbol for an anxious nation once again confronting its racial demons. He’s moving forward, knowingly, as both 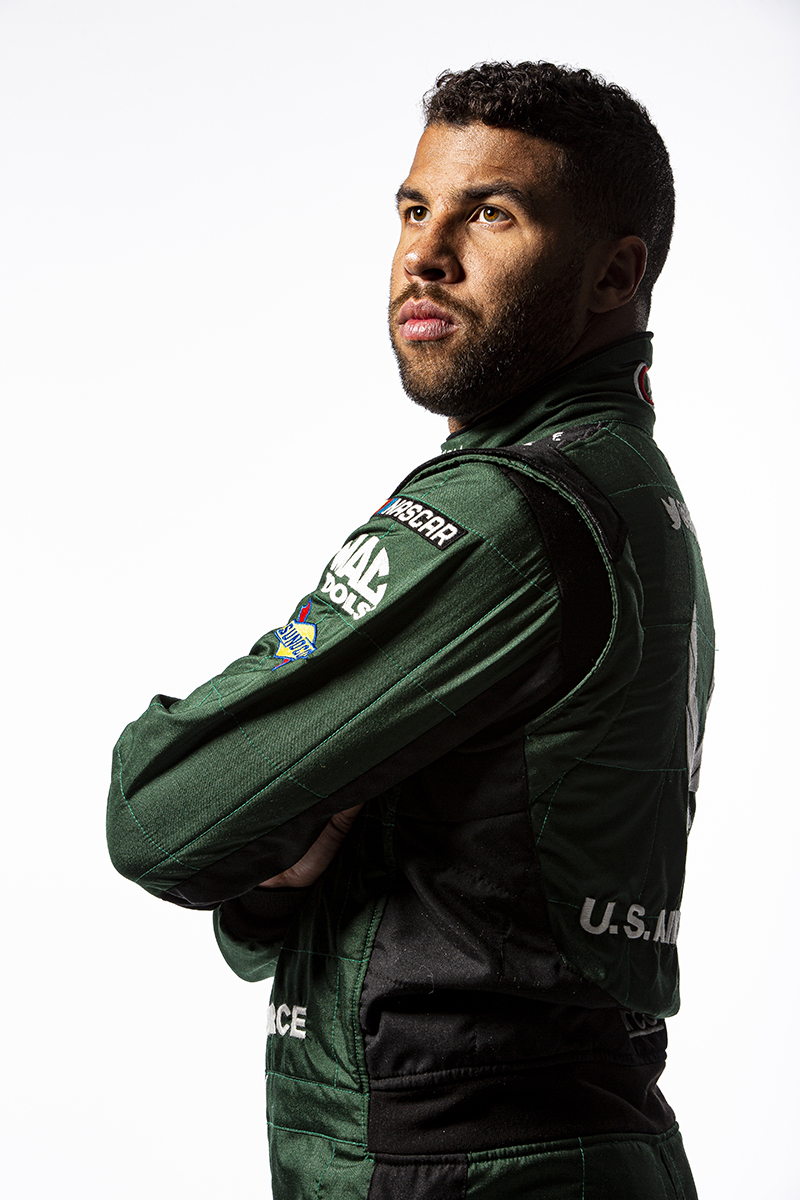 Down deep, he’s just another North Carolina country boy who loves to drive fast cars around a track. That’s what Bubba Wallace wants you to know in case you’ve registered a different impression of him this year, when he somehow transformed into a Rorschach test for a jittery, exhausted, plague-ridden nation forced once again to look hard into the mirror. Him? Bubba Wallace, the kid who grew up in Cabarrus County and started on go-karts at age 9? This year was complicated for him—in more ways than he thought possible or even wanted—but Wallace insists he’s not.

“I never saw myself as an activist,” he wrote in July for the Derek Jeter-founded publication The Players’ Tribune. “I’m just a guy who likes to drive fast, you know?”

In September, after the furor died down, he tells me: “I’m just kind of a laid-back and chill guy.”

It all flared over a matter of weeks in spring and early summer. First, the Ahmaud Arbery video went viral. Then, on Memorial Day, George Floyd. Less than two weeks after that, Wallace raced at Atlanta Motor Speedway in a T-shirt that read, “I Can’t Breathe. Black Lives Matter.” The next day, he called for NASCAR to remove the Confederate battle flag from its races, and two days after that, NASCAR did. That night, at Martinsville Speedway, Wallace drove his No. 43 Chevrolet Camaro adorned with a #BlackLivesMatter paint scheme and this slogan on the hood and back bumper: “Compassion, Love, Understanding.”

Then, in late June, came the infamous “noose incident” at Talladega: What NASCAR officials, drivers, and media believed was a hate crime directed at the sport’s only full-time Black driver turned out to be a pull rope that had hung in the garage stall since the previous year, long before Wallace was assigned the space. Racist social media trolls had a ball with that one, accusing Wallace of being another Jussie Smollett, making up racial offenses to generate sympathy. President Trump asked via Twitter if Wallace would apologize for “just another HOAX.” Wallace responded with a statement that read, in part, “Love should come naturally as people are TAUGHT to hate. Even when it’s HATE from the POTUS.”

The principle applies to any sport, but spatial and situational awareness can determine life or death on the track. When you drive, you need to know where you are and where you’re going, and where you are in relation to everyone else, and where they are, and where they might be going. You develop a sense of your presence and its effect on others, and theirs on you. You plan turns of the wheel knowing the next moment’s circumstances might force the opposite.

“‘Keep your head on a swivel.’ I was told that by a guy in the sport a couple of years ago and didn’t really know the exact meaning of it, and I’m not sure I still really do,” Wallace says over the phone. It’s just after noon on a weekday in early September, and he mentions that I’m his last scheduled interview, a welcome wind-down from the time over the summer when he would do 10 or more every day. “But seeing how it can apply to so many different things is super important. Make sure you’re always paying attention when you’re walking through. That applies to everyday life.”

He may be “the new face of NASCAR,” as a Charlotte Observer headline in late June asserted, but he matters for more than that. At 27, the son of a white father and Black mother, Wallace is one of a growing number of professional athletes who embrace their social power and what they’ve accepted as an obligation: to propel America toward a more just version of itself. You may be thinking of Colin Kaepernick, who’s paid dearly for his protests, or LeBron James, who’s led the NBA into the #BlackLivesMatter space.

But for Wallace to do the same for NASCAR, a sport born in the South and associated for decades with don’t-tread-on-me, Southern-by-the-grace-of-God, rebel-flag-flyin’ obstinance—and to do it in an era when white supremacy is louder and prouder than at any time since the civil rights movement—is something else entirely. Wallace may have thought of himself as just another country boy who loved to drive fast, but at some point this year, he came to accept that it was never going to be that simple.

“You definitely have to have big, broad shoulders to carry the weight of everything that’s going on, especially when you’re in my position,” he says. “I know a lot of people are just, ‘Shut up and drive, that’s what you get paid to do.’ I knew those people would be out there, and you’ll never change those minds.”

In his piece for The Players’ Tribune, Wallace wrote about how he wouldn’t have thought he’d be at the center of a national debate about the Confederate flag, or about the intersection of race and sports. “Then,” he wrote, “everything in the world just shifted.”

It could apply to so many things in this hellish year, which has pushed most of us into places we’d have run from, frightened, at New Year’s. “I’m learning to embrace it,” Wallace wrote, and for the most part, it’s working for him. (Of course, it certainly helps when Michael Jordan and Denny Hamlin embrace you.)

But that’s what got Bubba Wallace out there to begin with, after all: driving fast and making the necessary adjustments. “All this extra stuff is just an add-on,” he tells me, “and you have to be able to navigate your way through that.” That applies, as he says, to everyday life.