Offensive tackle Mike Remmers has become one of the best stories of the Panthers' season.

The Panther blue writing on the white and brown football in his locker read, "Mike Remmers, Offensive Player of the Game, Dec. 7, 2014."

Remmers, who was inserted into the lineup at right tackle three weeks ago, was part of an entire offensive line that received game balls for its performance in Carolina's 41-10 rout New Orleans in Week 14. But that ball in the locker was just the first. Remmers picked up another for his effort in last Sunday's 19-17 win over the Bucs.

“Every single week has been a dream come true. It’s an amazing feeling to be able to go out there and take the field with my teammates," Remmers said. "It really does feel like a dream, and I'm hoping I don't wake up. Everything’s been awesome, and I want to keep on winning some games and continue to play into the postseason." 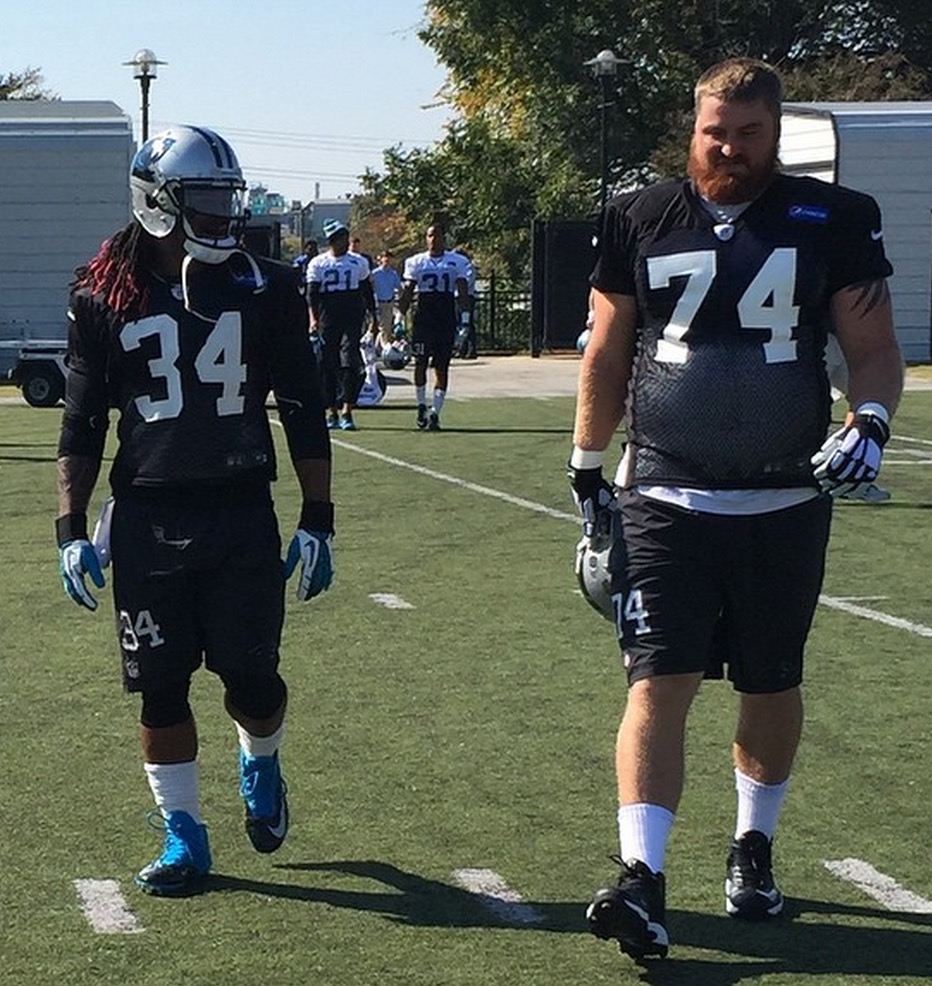 One of the reasons the Panthers' playoff hopes continue to flicker is an improved line. Center Ryan Kalil is playing like the Pro Bowler he is. Left tackle Byron Bell has settled in after dealing with multiple injuries. Rookie guards Trai Turner and Andrew Norwell are performing like veterans. But no one could have expected this from Remmers.

According to Pro Football Focus, of the 70 NFL players who have played tackle over the last three weeks, Remmers has taken the most snaps (232). The site has given him a positive grade for each game, and his overall rating for the three weeks is tied for sixth best among all tackles.

“Typically, if somebody’s available mid-season and they’re not in a starting lineup, it’s for one reason or another," longtime Panthers tackle Jordan Gross said. "But I would say with Mike, all that bouncing around has given him a lot of experience, and a lot of different coaches to be around. He’s been able to pick up offenses quickly because he’s had to."

Before coming to Charlotte, Remmers moved in and out of five cities in less than three seasons. He went from Denver to Tampa Bay to San Diego to Minneapolis to St. Louis. In October, he was signed off the Rams' practice squad by the injury-depleted Panthers.

Earlier this week, coach Ron Rivera admitted Remmers has been "a good surprise." In a season with limited good stories, Remmers has become one of the best. And this isn't the first time he's started from the bottom and worked his way up.

The Portland native "grew up bleeding orange and black," the colors of Oregon State. That's where his dad and older brother went to college, and Remmers said he wouldn't have gone elsewhere even if he received scholarship offers another school. He didn't. Actually, Oregon State was the only team that gave him a chance to walk-on.

Remmers ended up starting for three and a half years, and played in every game during his four seasons. As a senior, he was a semifinalist for the Burlsworth Trophy, given to the nation's top player who began their career as a walk-on. He didn't make it to the final round. The eventual winner, Boise State wide receiver Tyler Shoemaker, is out of football. Of the 10 semifinalists, four are on NFL rosters, and Remmers is the only one starting.

“Being a free agent is almost exactly the same thing as being a walk-on, always feeling like you’ve got to prove yourself," Remmers said. "I had some time on the practice squad, and I think that really helped me get better with my technique and my confidence."

Before his three starts with the Panthers, Remmers had been active just once. But in that game with the Chargers last year, he lasted four plays before he suffered a high ankle sprain. So most of his experience has come on practice squads, where he spent a total of 28 weeks in two and a half seasons. But Remmers never let go of his dream. Instead, he saw an opportunity.

“For guys on the practice squad, the thing is, there’s hope. You’re playing in the NFL. Even though you’re not starting, or you’re not dressing on active, you’ve still got a great shot. And you’ve got to be thankful for it because there’s so many thousands of people that would love to be on the practice squad for just one day," Remmers said.

“When I was on the practice squad, of course, I wanted to be on the active roster. But that helps drive you. It helps motivate you to want to get better."

That motivation has brought Remmers to where he is now, starting and making a solid argument for a spot in 2015. Considering how much he's bounced around, it's understandable he's leery to live anywhere than in the hotel where he's currently staying. But if he plays as well in the Panthers' final two games as he has in their previous three, he could soon call Charlotte his new home.

“Throughout my career, I haven’t been able to get comfortable anywhere. But I really want to find a niche here. I love it here," Remmers said. "So we’ll see how everything goes."