Latin cuisine encompasses a variety of flavors from South and Central America, Mexico, and the Caribbean. Here in Charlotte, some restaurants have adapted their dishes to American palates, while others are more authentic to their country of origin. From tamales to Tex-Mex, we’ve provided a sampling of our local favorites.

See our website for a full directory of restaurant listings.

Owner Andre Lomeli brings a Mexican and West Coast-inspired menu from his former restaurant in San Diego; his tacos, burritos, and enchiladas have the pizzazz of a food truck’s and the flavors of his native Yucatan Peninsula. The blue corn tortillas loaded with shredded chicken punch up a typical Taco Tuesday. The torta de cochinita pibil, a traditional Mexican sandwich, is stuffed with braised pork, black beans, queso, guacamole, and all sorts of sauces and spices you probably wouldn’t think to put on a fluffy white roll. And the California burrito, packed with skirt steak, queso fresco, salsa, and guacamole is the best you’ll have in Charlotte—spoiler alert: it has French fries inside. 4625 Piedmont Row Dr., Ste. 115-D, 980-298-6138 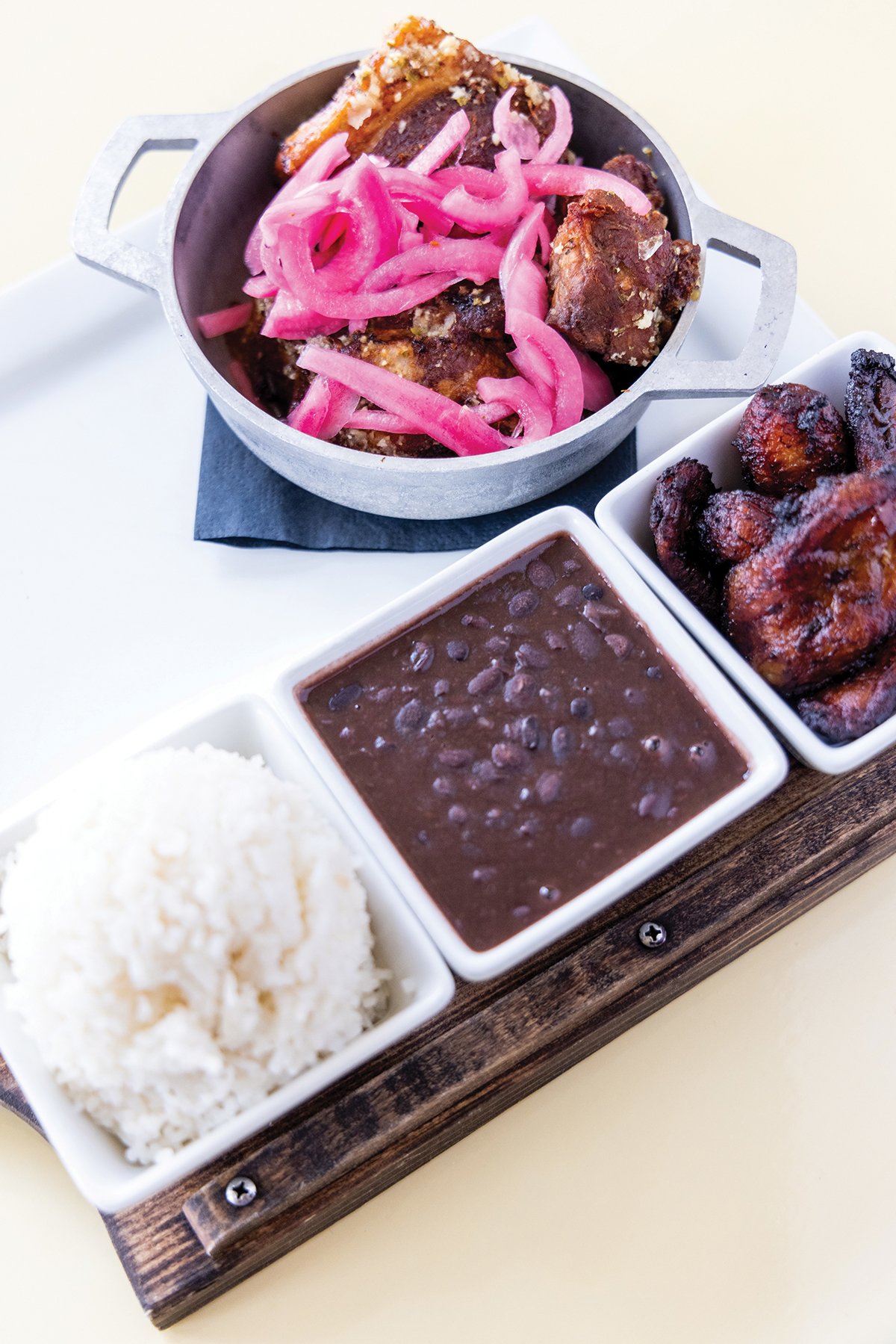 The Masa Frita at Havana 33 is crunchy fried pork and pickled red onions served with rice, beans, and plantains.

El Thrifty
1115 N. Brevard St.
980-949-7837
The Mexican cantina and gaming venue in Optimist Hall serves creative tacos and cocktails with a side of duckpin bowling. 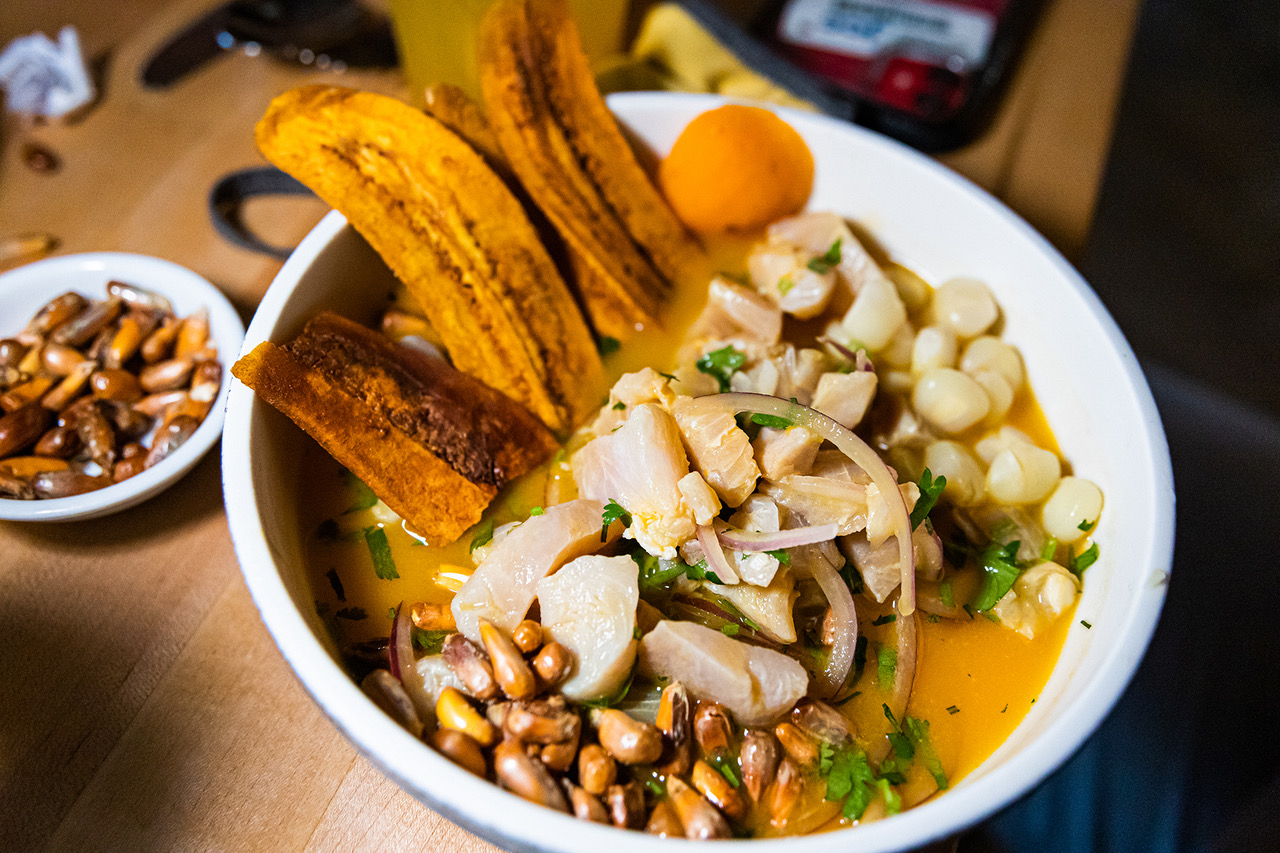 Sea Bass Ceviche is one of the teased dishes at Calle Sol. Courtesy photo.

Three Amigos
2917-A Central Ave.
704-536-1851
Feast on enchiladas and other Mexican staples like tinga de pollo and carne asada tacos. It’s always fresh, too—they’ll never save rice, beans, or meat for use the next day. 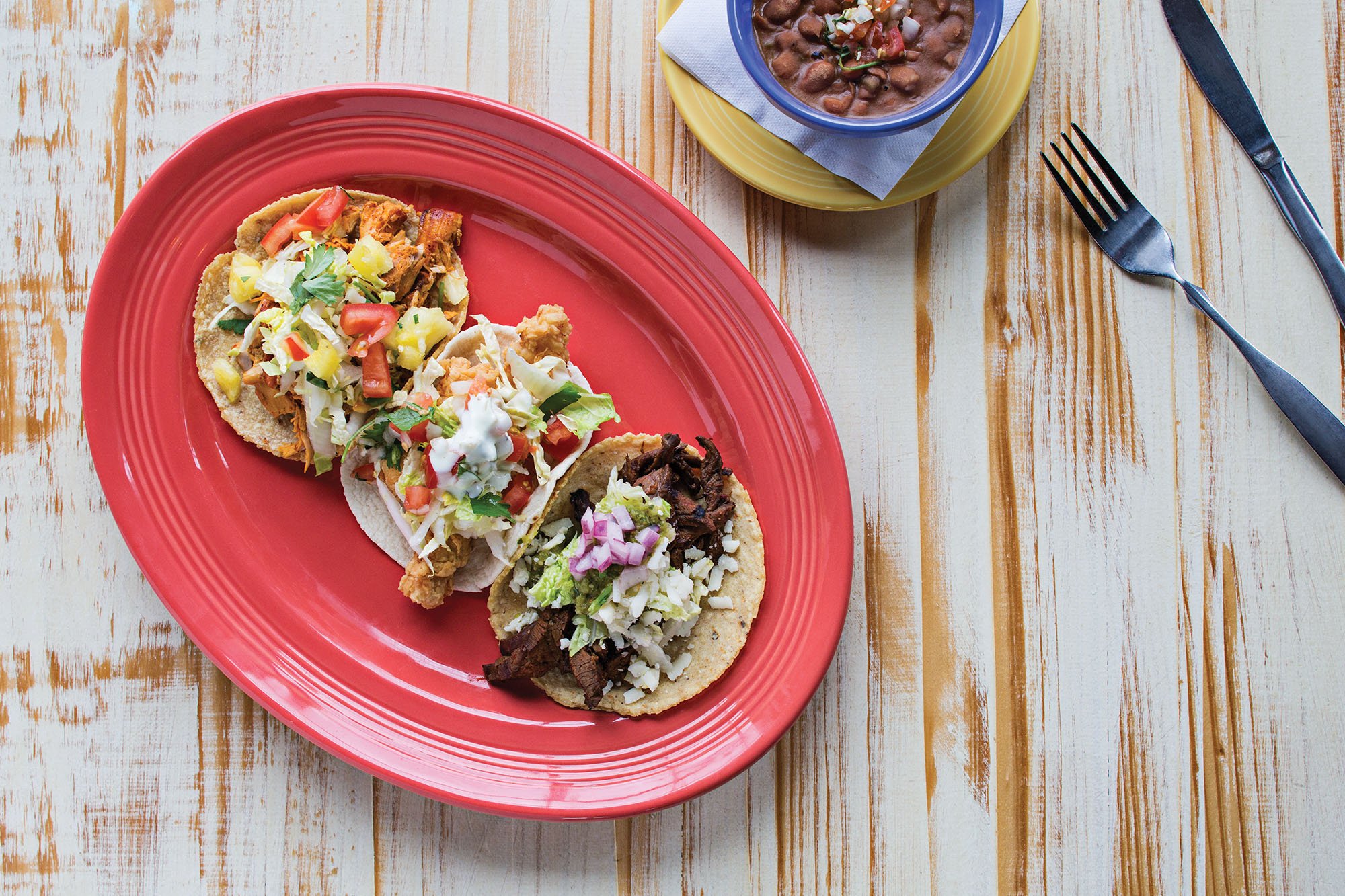 Southbound
2433 South Blvd.
704-912-1889
The breezy vibes and bright flavors at this taco joint call for a Pacifico or a margarita. 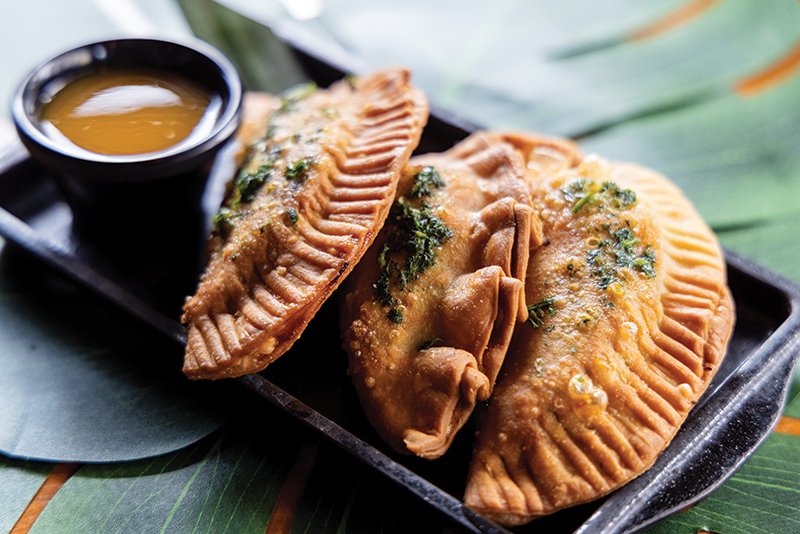 Roy’s Kitchen & Patio
3112 N. Davidson St.
704-910-2031
Come for a fruity cocktail, but don’t expect a trip to Margaritaville—this is a relaxed neighborhood hangout with cornhole, ping-pong, and rotisserie chicken you can smell from down the street. 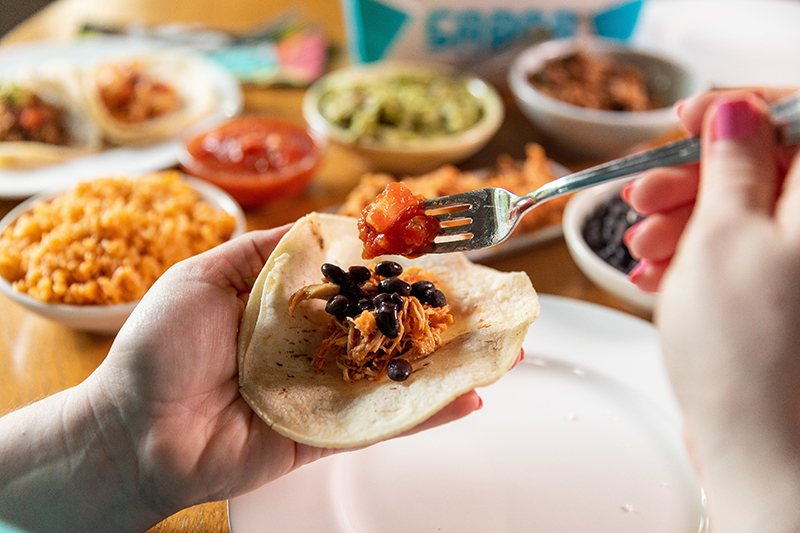 Sabor’s DIY arepa and empanada kit comes with everything you need to create and fry your own masterpiece.
Photograph by Peter Taylor. 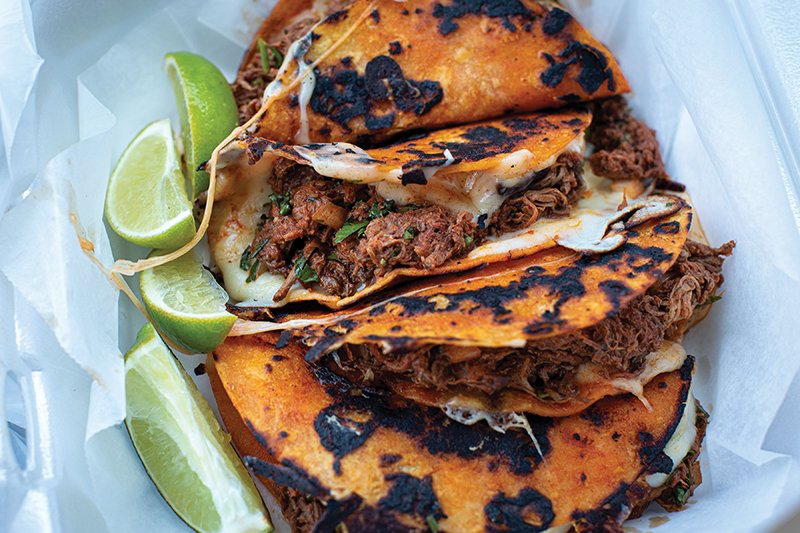 The Quesabirria at Maria’s Mexican Restaurant. Photo by Logan Cyrus.

Maria’s Mexican Restaurant
5234 South Blvd.
704-525-5075
Feast on quesabirria, a quesadilla-taco hybrid with melted cheese and slow-cooked beef, plus other birria variations that include a burrito, ramen, loaded French fries, and pizza.

RuRu’s Tacos and Tequila
715 Providence Road
704-332-7933
The “I’ll Have What She’s Having” is a standout here, with grilled mahi mahi, lettuce, avocado, cilantro, and pineapple salsa. But don’t pass over the Long Duck Dong, with Korean sweet-and-spicy steak, pickled cabbage, sesame seeds, and cilantro.

Tacos El Nevado
Multiple locations
Tacos El Nevado doesn’t have a proper Taco Tuesday special, but most of its tacos are $2 every day, so it’s always a solid deal. 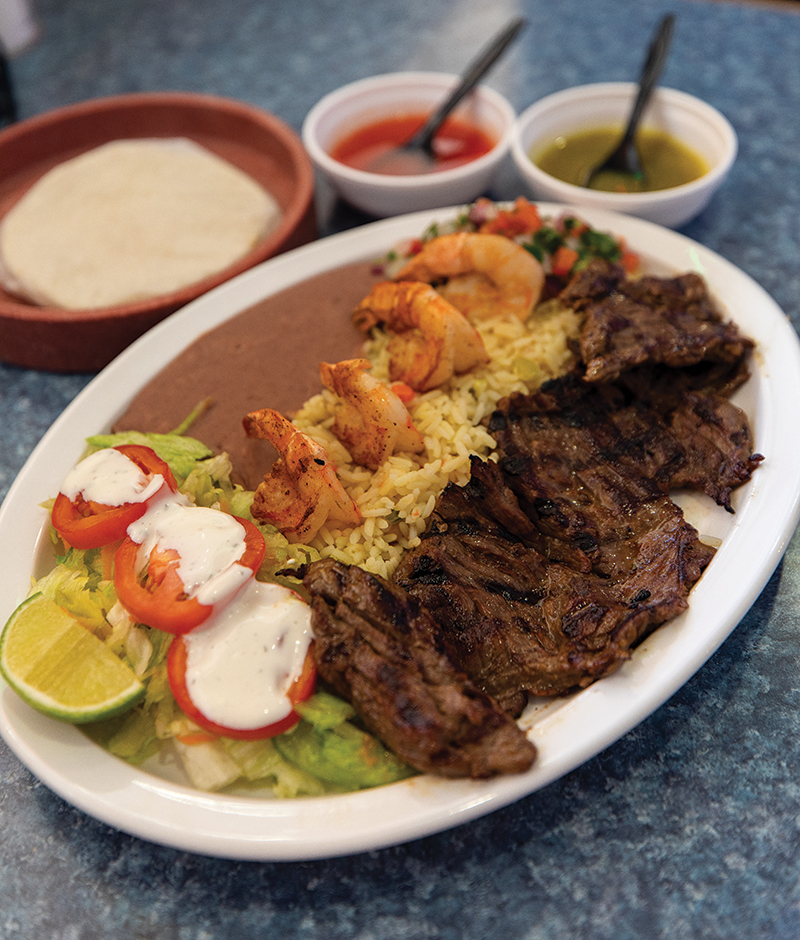 The steak and shrimp combination plate at El Pulgarcito. Photo by Peter Taylor.

El Pulgarcito
4816 Central Ave.
704-563-6500
Eat ceviche like you’d have it in Peru and skirt steak done Central American-style, plus tacos with your choice of asada, pollo, chicharron, and chorizo.

The Tipsy Burro Saloon & Cantina
2711 Monroe Road
704-249-3317
This Tex-Mex spot in East Charlotte does it big, whether it’s sizable chimichangas or the decadent South of Philly Cheesesteak.