The coronavirus and the December blaze have challenged Theatre Charlotte to reimagine its performances, but the community support that’s sustained the nonprofit for 93 years hasn’t gone anywhere

Theatre Charlotte’s associate artistic director, Chris Timmons, let the security company’s first call go to voicemail. It was 2 a.m., three days after Christmas. Those messages, he says, weren’t uncommon. “It’s usually just that the door has blown open,” chimes in Jackie Timmons, the theatre’s development director (and Chris’ wife). But when the phone rang again, Chris picked up. The security team explained that a fire had broken out. “So I went there thinking that I just needed to meet with a police officer and sign some paperwork,” he recalls. “And I came around the corner onto Queens Road, and the sky was just lit up with firetrucks.”

Chris watched through the open door as dozens of firefighters in full gear fought the electrical fire. Through smoke and moving shadows, he could already tell that one side of the historic auditorium was destroyed. Then, firefighters literally closed the stage curtains.

Theatre Charlotte has been a mainstay in the city’s arts landscape for nearly a century, but the one-two punch of COVID and the blaze has pushed the nonprofit closer than ever to a knockout. In the convulsing red light of eight fire engines, Chris wondered: Are we done?

The Charlotte branch of the American Association of University Women founded the organization that would become Theatre Charlotte in 1928, inspired by a national interwar vogue for community theatre. The troupe moved to its permanent home at 501 Queens Rd. in 1941, after more than a decade of performances at venues around town. (A fire at one of them, the Presbyterian College Auditorium uptown, destroyed most of their props. A coffin and turkey were spared.) Since then, the little clapboard theater has survived economic downturns and natural disasters to host volunteer-led stage productions every single season—until 2020.

“We were getting ready to go into tech to open a show,” Chris says, “and we went into lockdown.” The sets were built, the workers paid, the lines rehearsed, the tickets sold. They planned to delay the production until April. “All of a sudden, it was like, We’re in this for the long haul,” Chris recalls. “And that was the really scary part, because it’s like, We don’t know what’s going to happen, if there’ll be any relief funding. We don’t know if we’ll qualify. We don’t know when we’ll be able to do a show again. We don’t know how to do shows.”

Before the pandemic, 2020 was on track to be a record year for the nonprofit; now, if everyone demanded refunds, they’d be in deep trouble. But they managed. Many patrons, blessedly, didn’t ask for their money back. The theatre quickly figured out how to offer virtual programming, which didn’t bring in nearly as much as ticket sales. But by then, it was about more than just breaking even. “We needed to keep doing things to stay in the community’s eye and also to serve our artists,” Chris says. Jackie adds that it was important to remind older subscribers, especially those who lived alone, that they were still valued members of the Theatre Charlotte family. “Even if we weren’t making any money,” she says, “we were doing the right thing.” 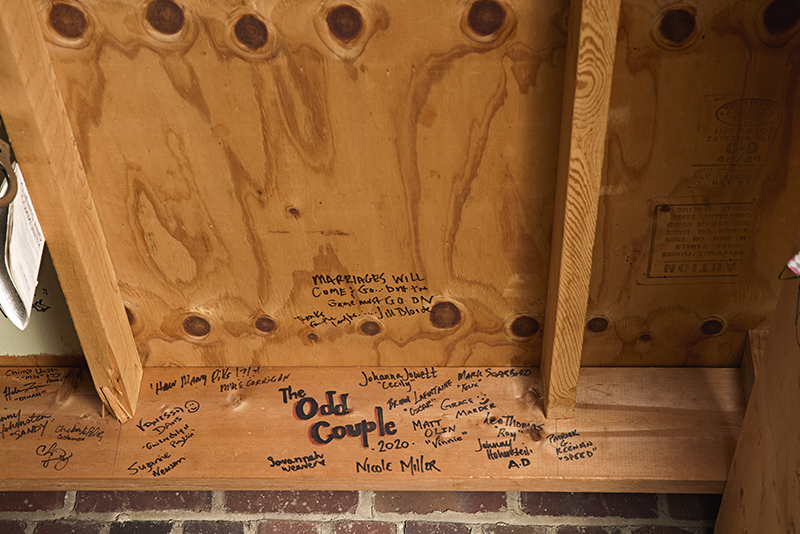 The Odd Couple closed on Feb. 16, 2020, and was the last play completed at the theater. Courtesy Magen Marie Photography.

The theatre pulled together and produced an Isolation Radio Hour series, with local actors reading parts in iconic radio dramas, along with several streamed shows and interviews with performers and production staff. Last September, they performed What I Did Last Summer al fresco, with seats set up in socially distanced groups in the parking lot. In the winter, the group put on A Christmas Carol at Christ South Church’s Old Dairy Farm in Waxhaw. They limited shows to weekend afternoons because the evenings were dark and cold, but audiences loved the nontraditional atmosphere as they reflected on Christmases past, present, and yet to come. By then, both the Moderna and Pfizer COVID vaccines had been approved and were slowly, painstakingly making their way into arms. The global tragedy had at long last entered its third and final act.

Then an HVAC (as far as officials can tell) sparked the fire, which wrecked not only the right side of the auditorium—from floor to seats to ceiling—but also the sound and light boards. “That first moment,” Chris says, his voice wavering slightly, “walking in the building and seeing the auditorium with a big giant hole in it and all the water just dripping down, was something I won’t forget.” Fire officials estimated $50,000 in damage, but their appraisal didn’t account for technical equipment, the expense of cleaning everything affected by soot and smoke, or the water damage from the fire hoses. The theatre will continue to assess the true cost, but Chris anticipates a multimillion-dollar capital campaign to restore and rebuild. The loss was staggering, existential. But in some ways, COVID had prepared them. “We’ve been training for dealing with a fire,” Jackie says, “without actually knowing we were.”

In fact, Chris says the fire couldn’t have happened at a better time. “We weren’t expecting to have an audience back until probably the fall of this year,” he says, “so this was as good a time as any for something like that to happen.” More than $11,000 in donations flooded in as the Theatre Charlotte team began the long and difficult route to restore its longtime home. Other arts organizations immediately got in touch to lend support and offer alternative venues. The outpour emphasized Theatre Charlotte’s fireproof community bond and the family feeling that’s helped it flourish for generations.

The nonprofit, tucked back in the Cherry neighborhood, has provided a springboard for stars who’ve gone on to Hollywood and Broadway. But it’s also a place, Chris explains, where you can watch your dentist take the stage. Here, neighbors join to suspend reality for a while, and the players, crew, and set designers—many new to Charlotte—form lifelong friendships. (Chris and Jackie met on set at another theater.) As Chris says, “Theatre’s more than a building.” 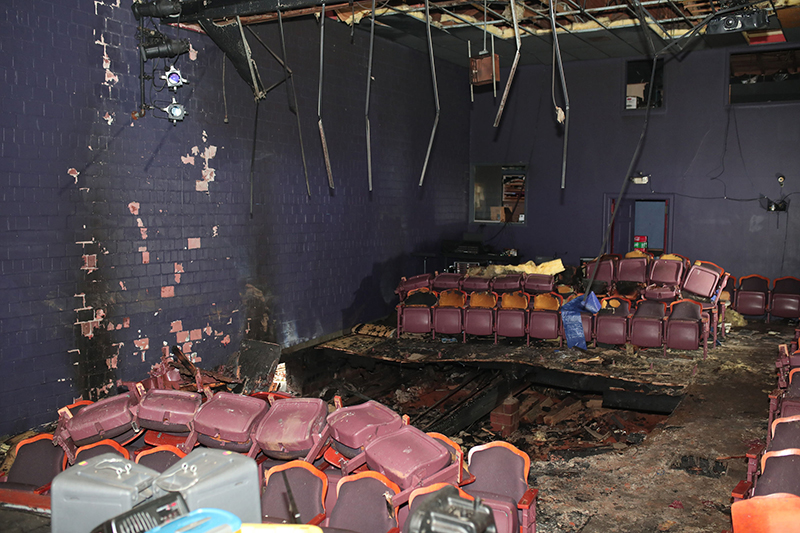 (Above) The theater area after the fire in December 2020. (Below) The same room in early March 2021. The wooden railing prevents people from stepping into the hole in the floor. Photos by Rusty Williams. 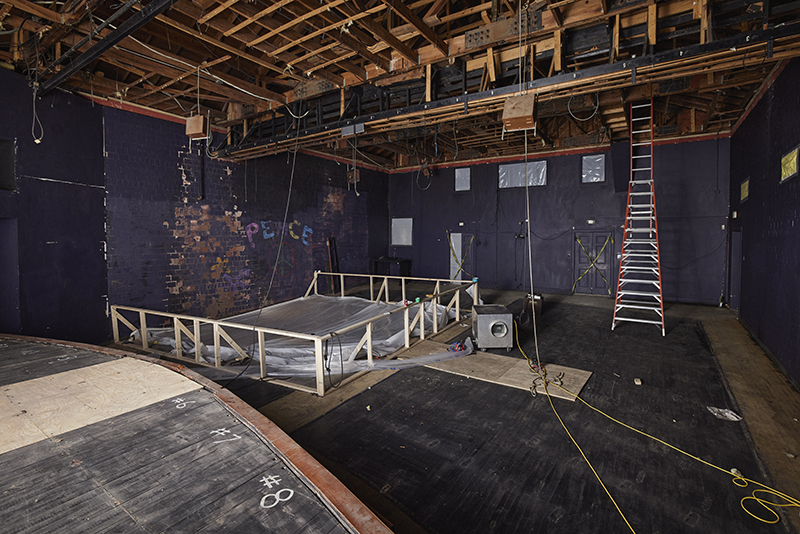 The organization contracted Jenkins Restorations to mitigate the fire damage. Afterward, an as-yet-undetermined contractor will take over to complete the repairs and upgrades, and the theatre will develop more events on digital and outdoor stages to fund the unexpected initiative. In the meantime, they’ve launched a volunteer application and a relief fund called Save My Seat, which accepts donations via Theatre Charlotte’s website.

Chris still has moments of doubt about whether they can pull through, but these days, he’s optimistic. The upgrades will underscore the thrill of returning to watch a play in person and the joy of reuniting with friends and neighbors before the lights go down. “We feel confident that we can make a difference in that space and make it a much more exciting environment when people come back,” he says. “Once I got over the initial shock of seeing that space, it was like, OK, now we have a chance to really make an impact here.”

ALLISON BRADEN is a contributing editor for this magazine.