Along the Way: Chasing Gizmo

What I learned when the dog got loose

I WAS THINKING about election fraud the other day when the dog ran out the door. Some piece of news had broken, and it seemed terribly important, but I can’t remember what it was now. A few other things were on my mind: returning a call to my father-in-law, deciding whether to take a friend up on an offer to see a basketball game that night, and saying hello to our neighbor Susie.

It was on that last thought, as I opened the storm door to wave to Susie, at 4:33 p.m. on December 4, that Gizmo took off.

We should pay close attention to the things we love, I’m here to tell you.

Gizmo moved in only a few months ago, in September, a bouncy, shaggy white mutt, 30 pounds and three years old, one brown eye and one blue. He’d been left outside most of the previous year, the adoption agency told us. We cleaned him up and gave him a seat on the couch. He must’ve known a hateful man or two, because he cowered around me and other guys. But he fell in love with Laura pretty much at first sight, so we had that in common. Every time she goes somewhere, he follows her from window to window until she’s out of sight. 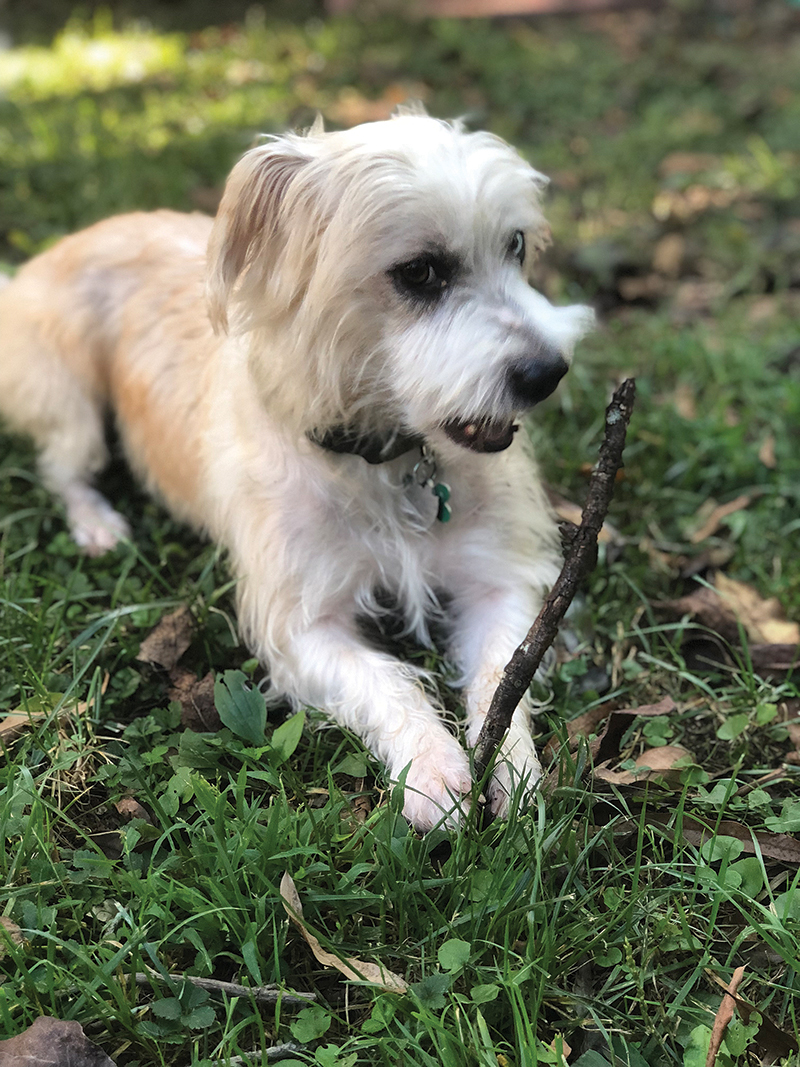 Maybe he was looking for her that afternoon when he sprinted down our street toward the main road on this side of the city, Eastway Drive. Susie took off after him, and her partner, Julie, and I took off after them.

Eastway is three lanes in one direction and two in the other. At rush hour that day, it was humming with cars that might’ve been tuned to radio stations telling news of an 800-point drop in the stock market, the funeral for the 41st president, and a recall on dog food.

One joy of having an animal around is that he doesn’t worry about things humans worry about. Gizmo’s never let an email go unreturned, argued with a relative over politics, or cursed at a forgot-password screen. There are tradeoffs for being unenlightened, though, and one of them is that he doesn’t understand the role physics might play in his mortality.

He didn’t look left or right before striding into the intersection. The stoplight, thankfully, was red as he crossed the southbound side. It turned green as he sniffed the front bumper of a car on the northbound side. The driver put her arms out wide, palms back, trying to hold back traffic like a store clerk restraining holiday shoppers.

On the other side, Gizmo wound up in a backyard with beer cans scattered on the ground. Susie and I thought we had him cornered, but by then his brain was a carnival of sights and sounds and smells he hadn’t experienced before. A chaotic mind is like a funnel cloud in that it only spins up more chaos. Gizmo ran harder than before, around Susie and me and back toward Eastway.

I’ll never forget what that looked like, this tiny white dog rocketing toward a blurry road. My knees stiffened. Julie was on the other side with her hands cupped over her mouth. I’m not sure what happened—maybe the light changed—but somehow, everybody stopped. No horns blew. Gizmo slid past a white pickup, and we followed him, as if we were the only things moving in a world magically on pause.

A jogger happened to be running on the sidewalk. She tried to grab him, but he zigzagged around her, too. He turned back into our neighborhood, flew past our house, and into calmer territory. By now our rescue team included a guy named Dave, whom I’d never met but who happened to witness The Dog Who Crossed Eastway. About six houses down, our friends Logan and Jamie and their three-year-old son, Ben, joined the hunt.

Here we were, just before 5 p.m. on a Tuesday, seven people who seven minutes ago had our minds on whatever-it-was, all eyes on a dog who wouldn’t know the difference between moving traffic and a field of wildflowers.

Maybe it was the quieter environment, or maybe he just liked the audience, but eventually he slowed down. Logan held out a treat, and Gizmo almost took it but backed off. Finally, I remembered something we learned in one of our training sessions. I stood and put my finger to my nose and said, “Gizmo.” He looked at my nose.

“Down,” I said, and we both crouched down.

He crawled toward a treat in my right hand, and I grabbed his collar with my left. The search party clapped.

Dave left before I could catch his last name. Julie went back to a meeting. Susie ran her errand. Logan and Jamie and Ben grabbed takeout. I put Gizmo on his leash and walked home. I wiped away a tear or two, thinking about what could’ve happened.

Laura happened to pull into the driveway at the same time we did. Gizmo nearly yanked my arm out of its socket trying to run toward her, ever in search of a human who can supply undivided attention, which, in this day and age, might be the most precious pursuit of all.

This article appears in the February 2019 issue of Charlotte magazine.
Categories: The Buzz