Anybody’s Game: Inside the Charlotte Hornets’ Growing Fan Base

It wasn’t just a building year for the Hornets. Their followers expanded and evolved, too, even with the frustrations of (at first) an empty Spectrum Center and (later) postseason hopes dashed. But the bandwagon is tuned up and ready for passengers

NINETEEN THOUSAND SEVENTY-SEVEN Spectrum Center seats sat empty during the first 20 home games of the Charlotte Hornets’ 2020-21 season. You and I know what it felt like outside. Inside?

“Cold,” arena PA announcer Patrick “Big Pat” Doughty says with a laugh. “Other than that, the only word I can think of is just  … ‘different.’ Imagine going to a gym to watch a game, but there aren’t any bleachers and you’re just kind of standing there, alone.”

The 52-year-old Maryland native has manned the mic at NBA games in Charlotte for 17 years. He was at that courtside table during all of the touchstones of the Hornets’ post-2000 story: Michael Jordan’s 2010 acquisition of the team; the return of the Hornets name after the first franchise relocated to New Orleans in 2002; the new franchise’s decade as the Bobcats; and a few playoff runs. (Any Ric Flair appearances, he adds, are also a big deal at Spectrum Center.) No time was stranger than the three months when the public address announcer had no public to address. The “exchange of energy” between announcer and crowd, Doughty says, is vital to the job. “Even when we’re not doing so well,” Doughty says during a May call, “they were always there, and they were always charged up.”

The only Hornets player left from Bobcats days is veteran center Cody Zeller. When we spoke via Zoom in February, Zeller said he longed to see fans in the seats. “There’s been a handful of games where we’re walking off the court, looking at each other, and saying, ‘Man, imagine how good the crowd would have been tonight,’” he said. “Especially with our big wins over teams like the Nets and Bucks.” 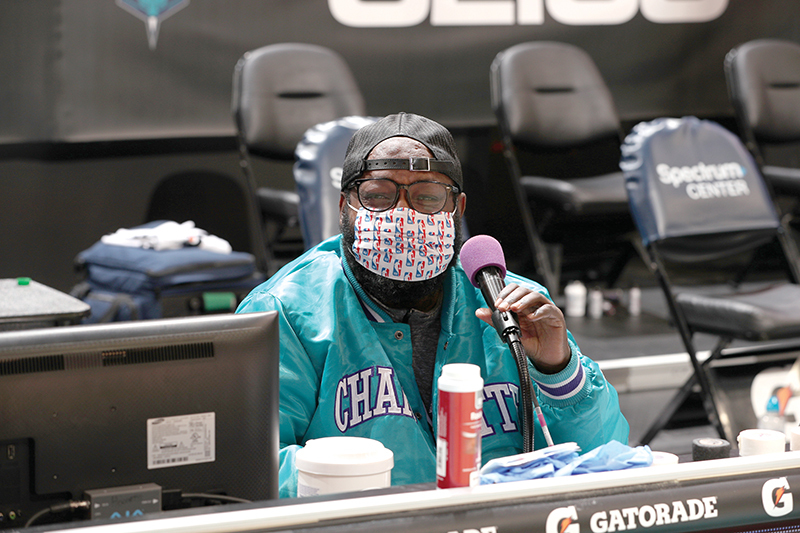 They got their wish in March, when relaxed statewide COVID restrictions allowed crowds of nearly 3,000, then 5,000, at Spectrum Center. You might expect that the 12 months between the March 2020 shutdown and the March 2021 reopening was a dormant period, when the team lost fans. But the base only grew, fan groups say; streaming numbers for televised Hornets games soared; and the Hornets Fan Shop saw record sales. Lukewarm toward its NBA franchise since the 1990s, fans’ passion has heated up.

It’s not just a case of the heart growing fonder during lockdown. The Hornets had their best season since a first-round playoff loss in 2016. At the center of the fan boom is a burgeoning superstar in LaMelo Ball, an exponentially growing city, and a foundation of role-players that analysts say is a springboard for future success. But how do longtime fans feel about the new bandwagoners, and how do they plan to capitalize on the momentum before it dissipates again?

I’M SURPRISED TO HEAR that Evan Kent doesn’t mind bandwagon fans. He is, after all, one of the most well-known diehards in the Hornets community. “Hey, if that’s what it takes,” says the 29-year-old co-founder of Bring Back the Buzz, a Hornets fan group with nearly 75,000 followers across its social platforms. “I’d rather be in an arena full of thousands that are half-bandwagon but create a great environment than sitting by myself like I used to be.”

Kent, who works in the Bojangles marketing department by day, co-founded the group with his brother, Scotty, in 2011. When they started, Evan was a student at Appalachian State while Scotty, now head of marketing for Hoppin’ Brands, taught in Mecklenburg Area Catholic Schools. The Charlotte natives have experienced the highest points of the franchise (four appearances in the Eastern Conference semifinals) to the lowest (the Hornets had one of the league’s worst attendance records as recently as 2019-20).

The Kents’ initial grassroots mission was to simply restore the Hornets name. The original Hornets team, which began play in 1988, was owned by local businessman George Shinn. For years, as the only pro sports team in town until the Carolina Panthers’ inaugural season in 1995, the Hornets were one of the NBA’s top attractions, and Shinn was a civic hero. That turned 180 degrees in the late 1990s, when Shinn was accused of sexual harassment in a lawsuit; the trial in 1999 drew record viewership on Court TV. A jury eventually found Shinn not liable. But he had to admit to infidelity during his testimony, and the stain to his reputation in an image-conscious Bible Belt city compelled him to move the franchise to New Orleans three years later. Charlotte got a replacement team in 2004 in then-owner Bob Johnson’s Bobcats—complete with a cool new mascot with bright-orange fur and sunglasses—and a new uptown arena that opened the next year. 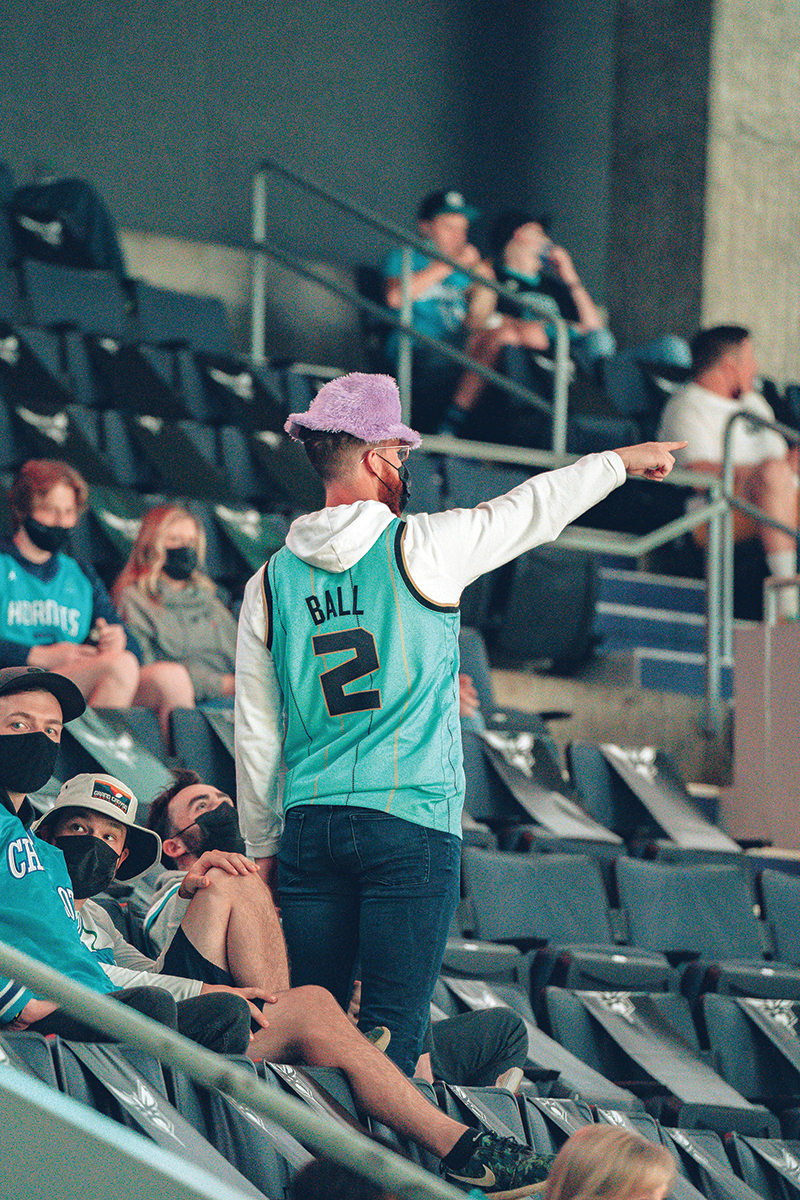 Statewide COVID restrictions relaxed in March, and fans (above) returned to what had been an empty arena. Evan Kent (below), a co-founder of the fan group Bring Back the Buzz, chats with fellow fans at Pinhouse in Plaza Midwood. Above Courtesy, Charlotte Hornets; below photo by Logan Cyrus. 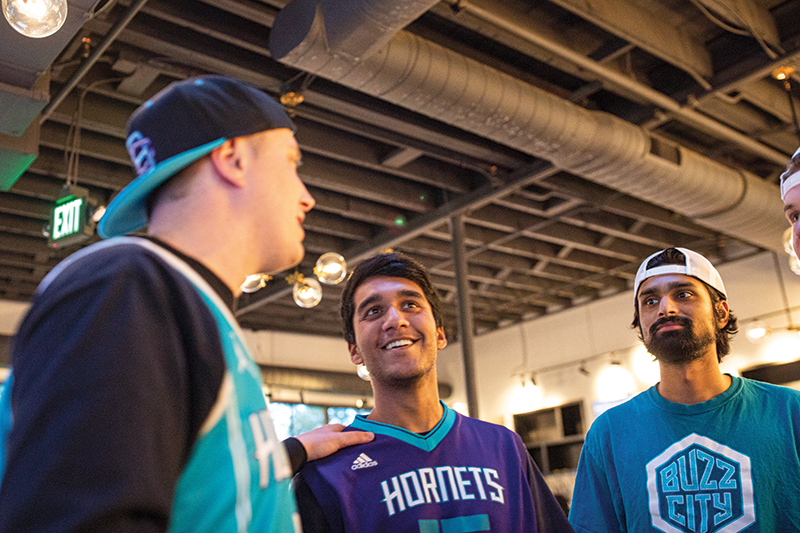 Rufus D. Lynx struggled to live up to the iconic status of Hugo the Hornet. When the New Orleans Hornets eventually rebranded to the Pelicans in 2013, it paved the way for Charlotte to reclaim the Hornets name, plus the team’s history, branding, and records between ’88 and ’02. The Kents’ campaign proved fan interest: Co-signers included their tens of thousands of followers, Hornets legend and original squad member Muggsy Bogues, and the media stories about Bring Back the Buzz.

So the buzz was brought back. What next? From that point, Evan and Scotty pivoted the group from grassroots campaign to fan organization. They started a podcast named Shootin’ The Shot! and collaborated with brewers at Unknown Brewing Co. on Buzzed City, a Hornets-themed American pale ale. And during every game, home or away, they trade off on commentary on the @BringBacktheBuz Twitter account. “We’ve been seen as either huge homers or way too cynical,” Scotty says, “so that told us we’re doing something right. But people have always come to us for our honesty, and that’s why they’ve stuck around.”

Maintaining that community engagement was the short-term plan. The long-term vision for Bring Back the Buzz, spurred by the most exciting player of a generation in Charlotte, involves another fan base entirely.

A MASKED CHILD—wearing a #2 Hornets jersey over a black hoodie—stands and points toward the court: “There he is!”

A few yards away, the 6-foot-6-inch rookie slings one of his impossible passes across the court and directly into the hands of P.J. Washington, who hits the 3. The March 15 crowd produces an impressive roar for just 2,861, and it’s loudest during Ball’s 25 minutes of playing time against the Sacramento Kings. Fans missed the in-person December debut of 19-year-old Ball, the 2021 NBA Rookie of the Year and the youngest player ever to record a triple-double. Ball, already successul overseas and the youngest son of high-profile businessman LaVar Ball, had millions of followers before he set foot in the Queen City.

An in-person Ball sighting is a rare thing at this point in the season, and among the sea of jerseys, his #2 City Edition is the clear favorite in this crowd. Demand for a Ball jersey is part of the reason the Hornets Fan Shop’s sales in January 2021 were up 414% from January 2020—more than doubling the revenue of January 2014, the previous record-holder. This year, Ball’s play contributed to a sharp rise in TV viewership after the 2019 departure of former star Kemba Walker in free agency had cut it in half, the Charlotte Business Journal reported.

Ball also embodies one reality of fanhood in 2021. Traditionally, fans follow teams. Today, a growing number of fans follow individual players. Columnists from media outlets like ESPN and Bleacher Report decry the trend and say player-centered fanhood isn’t real fanhood. But it’s the reality of a time when every professional athlete has his or her own social media account—and can use that platform to divide or unite the public against the franchise. Meanwhile, fantasy sports, a multibillion-dollar industry, incentivize a focus on individual pros.

A player is one of multiple entry points into sports fan bases today, joined recently by NFTs and a trading card market that boomed during the pandemic. Anecdotally, plenty of newfound fans are like me: a transplant from a rural community with no professional teams. Only 41% of people in Charlotte are native North Carolinians, whereas an average of 58% of Americans live in their home state. This city is ripe for bandwagoners.

Big Pat felt the phenomenon of Ball from crowd reactions. “That first game back, the team ran out,” Doughty says, emulating his game-time voice, “Here comes YOUR CHARLOTTE HORRR-NETS. … ’Melo must have been getting taped, because he came out last, and I started to hear this crescendo as he entered. Rah… rah… rah… and there he is: ’Melo comes out of the tunnel, and the crowd goes insane. I’ve only seen that happen for a few other players … LeBron, Wade, and M.J. when he enters the court for an event. ’Melo has taken a hold of this city.”

Bring Back The Buzz’s ranks have felt the LaMelo effect, too. A few years ago, the Kents noticed how their friends in Roaring Riot reacted to similar circumstances. The largest community of Panthers fans in the world took advantage of the energy that star quarterback Cam Newton and the Panthers’ 2015 Super Bowl run injected into the city. Founded in 2008, it’s the elder statesman of Charlotte fan groups: Its travels with the team include trips as far away as London.

“Now we have LaMelo,” Evan says, “and he’s our Cam. We feel like we’re building a culture, and success is on the way. Some people are following us just because of him, but I think we have to be open to that growth no matter how we get it. We’re a young city that’s a transplant-grown place. Young people are moving here, and they’re starting to have kids. And that’s what is needed to build a strong Hornets following for the future. We’ve had all of this stuff happen here, with the team going away and coming back, and now it’s time to invest.” 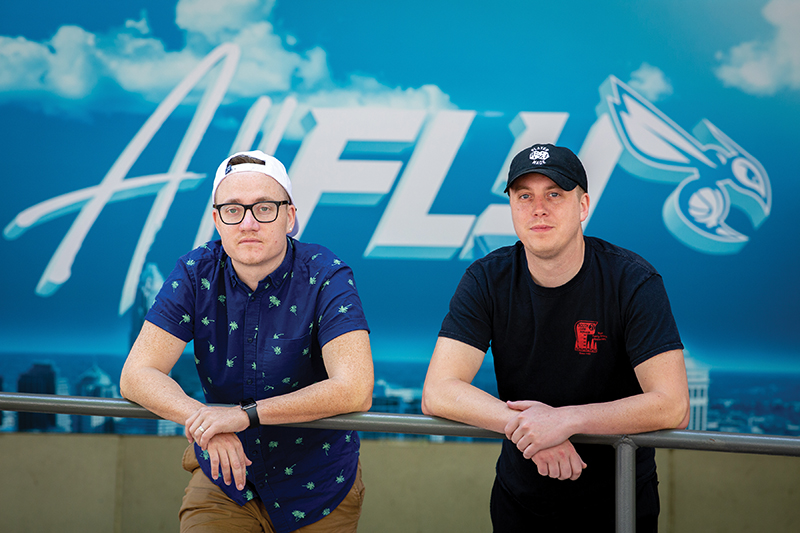 Brothers and Bring Back the Buzz co-founders Scotty and Evan Kent. Photo by Logan Cyrus.

Roaring Riot leaders Zack Luttrell and Josh Klein noticed the parallels, too, and the four hatched a plan to rebrand Bring Back the Buzz as a fan organization called the Crown Club later this summer. The new group will build on the community the Kents have fostered over the last decade, offering more local events and coordinating travel to away games, as Roaring Riot has done for Panthers road games. Evan says to not be surprised if Roaring Riot and Crown Club team up for events, too.

“But what we really want is a new club-camaraderie atmosphere in Charlotte,” Scotty says. “Why the hell can’t the NBA be like football, as a tight-knit community? We obviously cared enough to help get our city’s team to rebrand. Now we want to create the biggest community we can and get to know each outside of these platforms. I want to get to know their families and build this future together. Part of that is letting everyone know they’re welcome, no matter how they got here.”

ANDY SMITH is executive editor of this magazine.