You can’t miss uptown’s new barbecue block—unless you’ve lost your sense of smell. The alluring scent of smoky barbecue wafts into the streets of uptown from each end of the 7th Street Public Market, located on Seventh between College and Brevard streets. Four days a week, hungry people queue up for ’cue at the market’s Seventh Street entrance, where Dan Huntley parks his food truck, emblazoned with a drawing of him as Dan the Pig Man (complete with a butcher knife in each hand). At the opposite end of the block, facing Sixth Street, enticing aromas float from Queen City Q, where pitmaster Dan “Boone” Gibson slow cooks his barbecue every day in the restaurant’s wood-fired smokers.

Huntley is well aware of the power of good barbecue. As a reporter and columnist for The Charlotte Observer (where he worked for twenty-seven years), he says many of his best interviews happened over plates of barbecue. Now he’s more focused on food than conversation: He parks his truck outside 7th Street Public Market Wednesdays through Saturdays from 11 a.m. to 2 p.m. He serves pulled pork and bone-in Boston butt (both $7) that’s hand-pulled and cut to order after being smoked for twelve hours over apple and pecan wood. Each order comes with a side, typically his vinegar-based slaw or vegan collards. (Yes, that’s right: vegan collard greens.) 224 E. Seventh St. 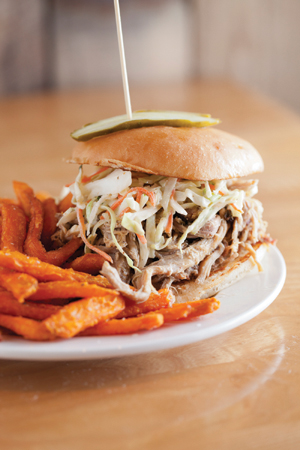 Each member of this barbecue haven’s foursome brings something unique to the table. Bryan Meredith and wife Sue Johnston wanted to create a restaurant. Restaurant (and barbecue) veteran J. D. Duncan, owner of Bonterra Dining & Wine Room, wanted to start up a new barbecue concept. Gibson’s recipes bring it all together—everything on the menu at Queen City Q was either created by him or follows a family recipe. The Hand-Pulled Pork ($11) offers a mix of fatty and lean cuts and comes with two sides, including classics like peppery Green Bean Casserole (Gibson’s mother’s recipe) and three kinds of slaw. 225 E. Sixth St., 704-334-8437, queencityq.com