The Double Door Inn, Charlotte's legendary blues and rock club, opened thirty-five years ago this month. Future blues giants, current rock legends, and local talents have all played the cozy stage in the former house. This oral and photographic history takes a look at how it all began and some highlights along the way

By Debby Wallace • Photographs by Daniel Coston
Adapted from the forthcoming book, Home of the Blues: 35 Years at the Double Door Inn, from Outskirts Press 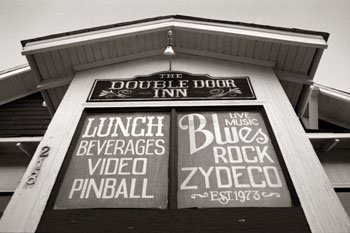 In 1973, gasoline prices were quickly escalating and had hit $1 a gallon, interest rates were at a historic high, and the economy was in a recession. A young Charlotte native, Nick Karres, not long past his graduation from UNC-Chapel Hill, was working for a local real estate company. One of his assignments was to find a business to lease the building at 218 Independence Boulevard that had recently been vacated when the Peggy Houston Lamp Shop relocated.

Nick Karres, Owner, Double Door Inn
"I kept trying to lease this building, but everything kept falling through. Interest rates made it difficult to find a business willing to lease the space. At the time, there were very few places in Charlotte where young people could go to hang out and perhaps drink a beer. So I began to consider opening a small bar in the building. My older brother, Matthew, had some experience in the business so I consulted with him about the possibilities. I almost literally begged him to go into this business with me."

Matthew Karres
"I had worked in bars in Chapel Hill and Charlotte but I wasn't sure that I wanted to be involved in actually owning such a business. . . . This building was originally a residence that was built in 1911 by the Wearn Lumber Company. At that time, it was located in the outskirts of Charlotte on a gravel road known as Fox Street."

Nick
"[Our parents] were not really impressed with our idea. They had concerns about what problems we might encounter with such a business. Operating a business that served alcohol in the Bible Belt was a somewhat radical idea at the time."

Matthew
"I remember discussing our [naming] quandary one evening at dinner with our parents. Our mother looked thoughtful for a moment and then, in a matter-of-fact way, she said the place has two doors. ‘Why don't you call it the Double Door?' "

Davey Long, Charlotte musician and photographer
"[Longtime local musician] Steve Nichols was driving to work at Reliable Music, and he sees these two hippies hitchhiking beside the road. He picks 'em up and they ask, ‘We're going to Reliable Music [a music store located in the space currently occupied by Actor's Theatre, near downtown]. Do you know where that is?' Steve said, ‘I'm going there!' Turns out they were members of the Dregs. They'd flown in on [Dixie Dregs lead guitarist] Steve Morse's private plane and hitchhiked from the airport. The guys asked if there was anywhere to play in town, and Steve said sure. The Double Door Inn!"

Nick
"Once the Dixie Dregs played here and I heard such a wonderful band live in an intimate setting, I was hooked. The music began to be the most important reason to keep going, at least for me."

Rob Thorne, drummer, the Spongetones
"I saw the Dixie Dregs there. By that time, no other bar was doing what the Karres brothers were doing. There was no other place to play in Charlotte. Every other bar in town was hiring cover bands that played Top Forty hits or else they were strictly into country or R&B. Initially, it was pretty loosely organized. You could just sit in with people and play. It was good for an audience. They always knew they were going to hear some good live music."

Mookie Brill, longtime local musician
"The first time I saw Stevie Ray Vaughan was there, and it was in October 1979. The band was called Double Trouble and they were scheduled for a two-day weekend. I went in there and I was just knocked out by Stevie. I thought, ‘This guy's going to be huge one day.' In fact, when they were knocking out the old bathrooms, there was a towel rack and someone had broken the mirror and on the cardboard underneath, Stevie Ray had signed his autograph. At the time, no one knew how big he was going to be some day, so I took it. In fact, I still have it."

Nick
"In 1982, I received a phone call from an executive in New York, who told me that we were going to have someone unexpected come into our business in about a month. I had no idea who he was talking about, but later I was driving home and I heard a radio ad for an upcoming Eric Clapton show at the old ‘chrome dome' coliseum. That was about the same time that we had the Legendary Blues Band scheduled for a show. Back then, that band consisted of many former members of the Muddy Waters Band, and they had played with Clapton. When I heard the commercial, I felt chills go over my body.

"The Legendary Blues Band was scheduled for a Monday-night show. We told a few people that they might want to drop by, but Clapton did not show.

"Clapton was basing his tour out of Charlotte at the same time. He and his managers and entourage were staying at the Radisson Hotel. Clapton played the Charlotte Coliseum on Wednesday night, June 23, but he did not come in that night. Many people still believe that this is the night he played at the Double Door, after that show, but it did not happen that way. He actually came in on Thursday night, June 24, 1982, after playing a show in Tennessee and flying back to Charlotte."

Thorne
"We, the Spongetones, have played some of our best shows at the Double Door. The crowd that used to come out to see us play has changed. Now, their kids come out to see us. For over thirty years, it's been the best place to play. I hope it lasts forever.

"We saw a lot of clubs and club owners come and go. But with the Double Door, we trusted them completely, and that's rare. Nick Karres is an anomaly in the business. We always tried to be respectful of the club and their patrons and we've always gotten that back. It's always great to see people mix so well. It's relaxed and you know the people at the bar want you there."

Mike Martin, night bartender and Double Door staffer since 1975
"I can remember especially when Luther Allison played here. The show started with his backup band playing several numbers. Just as the crowd got a little restless, I heard an almost thunderous noise from the front staircase. I looked up and sure enough, here came Allison down the steps, playing his guitar and wandering through the packed crowd to the stage. Once he hit the stage, the band played straight through for more than two and a half hours. The audience didn't even ask for an encore. Everyone was so blown away by the show that they were almost stunned. I do remember the guys in the band had to almost run to the men's room. After sipping water all night and playing so long, they definitely had to go!"

Nick
"Once you take so many chances over the years, it gives you a feeling I can't really describe. A serious businessperson would have never done business this way. If money had been my biggest motivator, I would have run a hotel bar and brought in Top Forty bands. To me, the most important thing that we have accomplished over the years is the fact that we are still here. I've always felt that one should always try to do the best he can with what he has, and that is what we have strived to do here. I am proud of what we have accomplished."

Debby Wallace and Daniel Coston are longtime chroniclers of the local music scene. Their book, Home of the Blues: 35 Years at the Double Door Inn, will be published this month by Outskirts Press. The book will debut at the Double Door's anniversary show on December 22, and will be available at local bookstores and myspace.com/ddithebook.

This article appears in the December 2008 issue of Charlotte magazine.
Categories: Feature, The Buzz
Contest of the Month