Already the most influential sports figure in town, what’s to stop Cam Newton from evolving into Charlotte’s first sports icon? 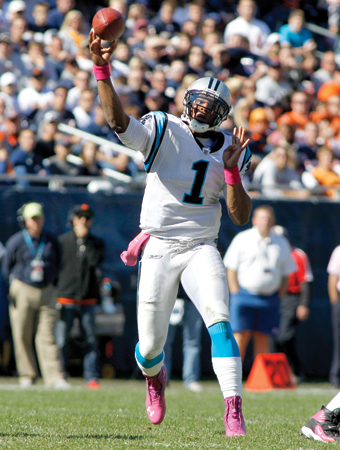 This just in to the NewsHubActionCentralHotLine: three people met for drinks in Charlotte tonight and spent more than an hour in conversation without mentioning Cam Newton. Film at 11.

In thirty years will we still talk about Cam Newton? Will his name have become synonymous with the city? Will he have parlayed his football achievements into longstanding influence in our town, and even power? Or will we view Newton as merely another former jock, an excellent one, but just a jock?

These days, hardly anything in Charlotte is discussed as often or exhaustively as Newton, the Carolina Panthers’ sterling rookie quarterback. He’s the first number-one draft selection the team has made, the first player to debut in the NFL with consecutive games of 400-plus passing yards. He’s already creating spikes in the Panthers’ television ratings, and he’s frequently the subject that arises when neighbors gather to band their trees or takeout customers wait for orders at that new Thai-Cajun-Bulgarian fusion joint.

Wherever they take place, those conversations are laden with hopeful guesswork about exactly how Newton’s career is going to unfold. Will he end up getting to the Pro Bowl three times? Or seven? Will he turn into a Donovan McNabb, ably leading his team to commendable seasons and playoff victories but falling just short of the grandest triumphs? Or is he a messiah in shoulder pads, our Joe Montana?

But let’s look further down the road. For the purposes of this speculation about Newton’s potential for power, let’s presume he dodges catastrophic injuries, fulfills at least a healthy portion of his abundant promise, and sticks with the Panthers, spurning free-agent contracts that would take him elsewhere. (Memo to Jerry Richardson: don’t lowball Newton on the next contract.) We’ll also figure that, through maturation and growth, he avoids the type of untoward incidents—an arrest for swiping a laptop, allegations that his father sought cash from recruiters—that muddied his college years and maintains a public image of respectability and responsibility. No DUI charges, no performance-enhancing drugs, no dog-fighting convictions.

All those pieces have to fall into place. Yet by themselves they are not sufficient. To establish himself as truly significant in Charlotte’s hierarchy, to develop into the transcendent postathletics figure that our city has not had in its twenty-four-year history with professional sports teams, to leverage his on-the-field excellence into an influential second phase of his life, Newton will need to build an interest in other pursuits, not to mention continuing to exude an extroverted, and winning, personality.

If it were enough to have been a terrific player, basketball great Kareem Abdul-Jabbar would rule Los Angeles. Instead, it was the ebullience and entrepreneurial bent of teammate Magic Johnson that enabled him to carve a huge spot for himself on the L.A. landscape. Similarly, although Dave Bing flourished as a high-scoring guard for the NBA’s Detroit Pistons in the 1970s, it was his launch of a prosperous steel company that thrust him into public affairs and then into the mayor’s office in a 2009 election.

In New Orleans, former Saints star Archie Manning is one of the community’s respected elder statesmen thanks to his involvement with civic causes, and current quarterback Drew Brees is regarded as nothing less than heroic because of his energetic and optimistic leadership after Hurricane Katrina’s devastation. (Doesn’t hurt that he won a Super Bowl.)

Of course, sometimes being a great guy is enough. Stan Musial, perhaps the best hitter who has played for a baseball team west of the Mississippi, was so beloved in St. Louis that power simply accrued to him. He’s still big there; last year, forty-eight seasons after he retired from the Cardinals, Sports Illustrated published a cover story about him.

You can find comparable examples in many locales, though Charlotte hasn’t really had a parallel. For one thing, NASCAR drivers don’t wear uniforms with “Carolina” or “Charlotte” on the front, which somehow lessens broad-based identification with them as individuals. Plus: lots of people still ignore racing. For another, we haven’t had an athlete with sustained neon-lights magnitude. The Hornets’ Dell Curry wasn’t so iconic that he gained a leg up toward power, and Larry Johnson, memorably charismatic as a player, was continually thwarted by injuries. The Panthers’ Steve Smith is too often a case study in anger, and Jake Delhomme, even if he hadn’t been frustratingly inconsistent, made his home in Louisiana, not here. (Memo to Cam: if you want influence in Charlotte, best to get a 282-something ZIP code.)

Given that there’s a vacuum, Newton seems as good a bet as any athlete Charlotte has had to build power in the community over the next several decades. Clearly, he has the physical wherewithal to become one of the NFL’s top quarterbacks, and that sort of profile and preeminence is indispensable in the aggregation of influence.

From there, it all depends on where his off-the-field passions lead him.

People change and develop, and their evolution can surprise us. (Memo to self: Give Cam Newton a call in 2031.)

Cam Newton already has a figurine, but check out his action figure, Super Cam. This one throws, smiles, and overachieves.