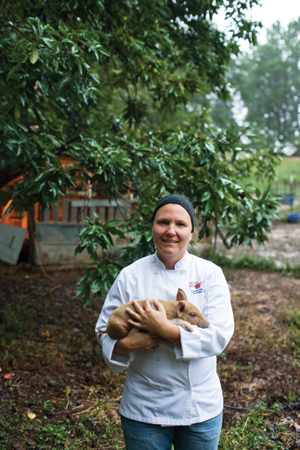 Farmer, chef, and restaurateur Cassie Parsons has been making a profit ever since she opened Harvest Moon Grille last October. And Parsons, who sees her establishment as a way to spread the word about local food, did it while using almost all locally sourced ingredients—a first for Charlotte restaurants. Now, as others try to achieve success using Parsons’ template, it’s clear that this soft-spoken farmer is changing the way this city eats.

Parsons speaks with enthusiasm about local fare as she walks around the ten-acre Lincoln County farm she owns with Natalie Veres. With its wooded rolling hills, Grateful Growers farm is perfect for the pork they’ve been raising there for more than seven years and selling to Charlotte, first through a farmers market stand, then in local restaurants, and eventually from the city’s first upscale food truck.

When the Dunhill Hotel asked her in 2010 if she’d open Harvest Moon Grille in its space, Parsons decided that it could be one more great way to spread the word of local food. A year later, the restaurant’s success can be seen in its crowded dining room and what Parsons describes as a positive economic impact: for every dollar spent eating locally, she says, $7 goes back into the community. These days Parsons is developing an uptown urban garden where chefs can own plots. She sees it as a place where food can be grown and locals can be educated. But of course she doesn’t want to stop there. “I want there to be beehives on the roof,” she says. “And to see chickens in the garden.”