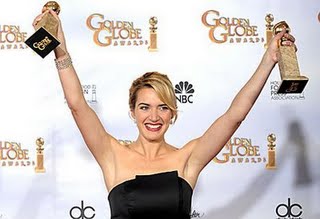 Well Shoptalkers, the Oscars are just around the corner and so we have decided to share with you our picks for who should win in the most important categories: Most Improved, Best Dressed, and Biggest Disappointment. What, you didn’t think we meant, like, the actual movies and actors did you? Ha. No. We haven’t seen them. Any of them. What we have seen is a heck of a lot of red carpet arrivals photos, so that is what we are qualified to judge.

So let the judging commence!

Shoptalk’s Pick: We really want it to be Angelina Jolie, who has quite frankly been boring us to death this awards season. We’d really love it if she would take a cue from the title of her own movie, The Changeling, and changeling into something a little bit more exciting for one night. You are Angelina frickin’ Jolie! I think you can afford to spice it up a little. However, the odds are that we are in for another slightly blowsy neutral gown with a pale lip and neat (if not terribly innovative) blowout. Bah.

Another Likely Winner: Marisa Tomei seems to have taken the criticism of her “Arrrrg Ahoy Matey” look from the Globes to heart, dressing to impress at the DGA’s. Our odds are on her to wear something that totally makes everyone forget about that whole Dread Pirate Roberts ensemble. (Bonus points for movie reference identification!)

Shoptalk’s Pick: Our affection for Kate Winslet really cannot be overstated. She is gorgeous, smart, talented, seemingly grounded, and the blue Narciso Rodriguez she wore to the SAG’s is high in the running for our favorite dress of the entire awards season. Also, it’s highly likely that our girl Kate is going to be accepting a statue on Oscar night, so we would love love LOVE it if she would wear a dress that not only wows us for the night, but a dress that is so fantastic that it will still be a knockout when we are looking at her “Oscar acceptance speech” photos and video 50 years from now as part of a Kate Winslet retrospective. Now is the time to bring it, you sassy British wench, you.

Another Likely Winner: Kate Winslet. As I said, we are completely gaga for her so we are going to give her all the fake fashion awards we want. Don’t make us look like fools, Kate.

Shoptalk’s Pick: Renee Zellweger. Three years ago, Renee was a red carpet Must-See. She evoked Grace Kelly. She made Carolina Herrera a household name, and taught us how to recognize a CH silhouette from sixty paces. She was a sight to behold. Now we need someone to hold us, because we are cringing at the sight of her. The insane-o nude see-thru schoolmarm get up from the Globes was the straw that broke the fashion bloggers back, but what we really REALLY can’t stand is her terrifying collarbone, ruddy pale face and pursed nude lips. Unless she can recapture some of that romantic, feminine, sophistication that she had a few years ago, this is going to go down in the books as the start of Renee’s great decline in the fashion world. Better jump ship while you can, Carolina Herrera.

Another Likely Winner: Anne Hathaway. Anne. Dear Anne. We hate to say this. You are truly a lovely, LOVELY girl. Great hair. Huge doe eyes. Legs that we would consider killing a semi-close relative to have (Watch your back, cousins in New Jersey. There are five of you. It would take a while for someone to notice). But your awards season choices have left something to be desired. None of them have been, “bad” per se, and it might even be totally unfair of us to write about you under the same category as train wreck Renee, but we expected more from you. You have a killer smile, gorgeous skin, and a cute (if, perhaps shrinking at an alarming rate) body, so why not dazzle us? Seriously. Do it. We are begging you.