Using local ingredients to create a French menu might seem farfetched, but Ratcliffe on the Green's Mark Hibbs is making it work 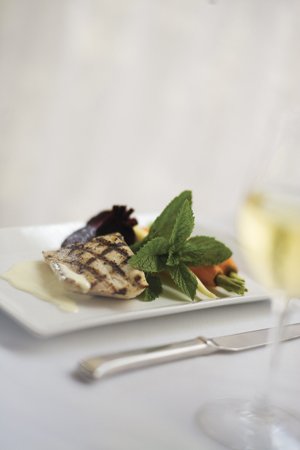 Grilled mahi-mahi from the Carolina coast with New Town Farms beets and a beurrre blanc sauce, $24.

Mark Hibbs, the co-owner and executive chef at uptown's Ratcliffe on the Green, has gained near-guru status in Charlotte among fans of the eat-local and slow-foods movements. Hibbs buys local meat and produce whenever he can—he even has his own garden. Then he cooks it all up right.

Which all made sense when his menu at Ratcliffe was Southern-influenced contemporary American. But that was in the high-flying, pre-Wachovia-meltdown days, when $20 for an appetizer didn't seem all that unreasonable. Now, it does.

So in February, the same month he was named a semifinalist for a James Beard Award, Hibbs tweaked his menu. There are still vestiges of that Southern influence, but the overall concept is now that of a French brasserie (think steak frites, coq au vin, mussels). Odd, yes. But it's actually a great idea. Since Bijoux closed a few years ago, there has been no brasserie-style menu in Charlotte. And the simple ingredients of the cuisine still lend themselves well to Hibbs's preference for local flavors.

Take the Coq au Vin a la Ratcliffe ($19.50), for example. The French braise an old tough rooster. Hibbs uses half of a locally raised free-range chicken. Then he stuffs that with a mousse made from the white meat and onions, bacon, and mushrooms. The sauce is the red wine those ingredients were cooked in, reduced down and drizzled over the dish. The French would be jealous, if they were capable of such weakness. His version of steak frites is a flavorful strip steak topped with maître d' butter alongside delicately roasted potatoes ($15.95). The meaty crab cake appetizer, when available, is outstanding. Escargot are served out of the shell on top of puff pastry with a parsley, garlic, and butter cream sauce ($9). And if you're not trying to keep it light, you really should order an extra biscuit for a buck and a side of the ethereal Gruyère mac and cheese ($4.25).

To keep the locavores and special-occasion diners sated, Hibbs also runs a nightly tasting menu, which changes often, sometimes by the hour, depending on what he can get from local farmers. Choose three courses ($45) or four ($60) and add wine pairings for $7 a course. The tasting menu is served to the entire table only, and the wine list is predominantly French, albeit reasonably priced.

What hasn't changed is the crisp yet friendly service and the absolutely gorgeous interior. This isn't a restaurant made to look elegant and historic. It actually is. The Tiffany stained-glass windows add drama, and couples seeking romance can choose the bay window or the balcony table.

Also, look for special promotions through the new Eat Charlotte, a coalition of locally owned restaurants. Specials will change each week.