Yes, hoppy beers get you drunk and leave you in pain—but not for the reasons you might expect

You could drink beer for a lifetime—down gallons of Hop Drop ’N Roll from NoDa Brewing and Hoppyum from Foothills Brewing and Death By Hops from Olde Hickory Brewery—without knowing the answers to two fundamental beer questions: What are hops? Why do brewers use them? (If you like IPAs, you often ask a third question the morning after: Who’s repeatedly striking my head with a massive hammer?)

First: They’re technically flowers—flower clusters, anyway. They’re seed cones. The common hop plant, Humulus lupulus, produces them in late summer. Farmers harvest and dry them, and brewers use them to add flavor to beer, which is a byproduct of dried grain (malt) fermentation. Brewers have done this for more than 1,000 years, since they discovered that hops not only add layers of aroma and flavor to beer but also act as a natural antibiotic and preservative. 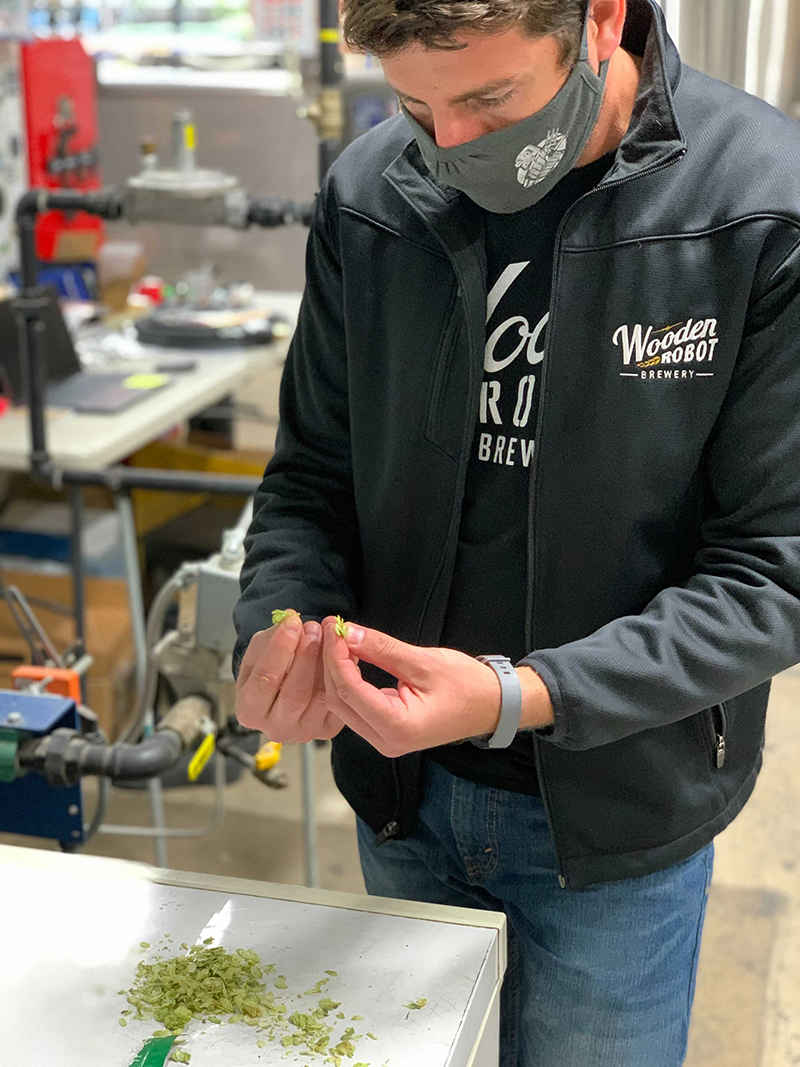 Logical enough. But you may have noticed, if you’ve drunk beer at any point in the past couple of decades, that taps and store shelves swim with beers that proudly flaunt their hop content, as if hops were a sacred herb that transforms your everyday stein of suds into an elixir. If, to you, that means a hop-rich beer will generally get you drunker faster than, say, Bud, a mass-market lager, you’re correct as well as drunk. But the connection may not be what you think.

Follow me. We’re in the storage area of Wooden Robot Brewery in South End, where co-founder and head brewer Dan Wade opens the lid of an industrial freezer that contains a collection of foil packets the size of jerky bags and, to the right, a selection of freeze pops. (The pops play no role in the brewing process. They just hit the spot when the weather’s warm.) Wade tears open one of the bags and pours out a handful of what he refers to as “whole leaf” hops—dried seed cones that the farmers harvest. He crumbles one in his palm, and a yellow powder reveals itself amid the fragments of pale-green leaves.

“That yellow powder is really all the stuff we care about as brewers,” he explains. “It’s called lupulin, and that has the bittering compounds and the essential oils that add the citrusy, the floral, the spicy (flavors).”

He holds out his palm and invites me to sniff. Even through a mask: Whoa. If you’ve consumed a local pale ale or IPA—like Wooden Robot’s own Overachiever, the winner of this magazine’s 2021 Beer Bracket competition—you know a milder version of this aggressive, citrus-rich aroma. It’s the main characteristic of grapefruity Cascade hops, the strain, mainly grown in the Northwest, that practically defines American pale ales. The scent is just as strong in pelletized, commercial-scale hops; the pellets, which resemble rabbit food, pack the most hops in the smallest form and are free of water and air that could decay them.

Hops balance what would otherwise be an overly sweet, boozy brew. They don’t contribute to alcohol content. But the higher the alcohol content, the more hops brewers tend to add during fermentation to disguise the taste and smell of alcohol and—because hops are a bittering element—counteract its natural sweetness. The combination of high ABV and sugars is usually what wields the hangover hammer the next day.

That’s why brewers like Wade approach the hoppiest of even their own beers with caution. “Double IPA tends to be something that you don’t see brewers drinking quite as much,” Wade says, “especially because you just can’t drink as much of it.”