The Democratic National Convention is not the city's first brush with national politics —V. B.

December 1774—Colonists call for a boycott of British goods to prove the settlers are determined to gain independence. Charlotte residents select a “Committee of Safety”—John McKnitt Alexander, Abraham Alexander, Hezekiah Alexander, Thomas Polk, and Ephraim Brevard—to help carry out the boycott and keep citizens informed of its results.

June 3, 1775—Carrying the so-called Mecklenburg Declaration of Independence, Captain James Jack rides on horseback to Philadelphia to inform the Second Continental Congress of the Mecklenburgers’ proclamation of freedom from British rule.


September 26, 1780—British Commander Lord Charles Cornwallis and his men march in expecting a greeting from loyal followers of the Crown. Surprise! They are met by Major William Davie and 150 soldiers, who were hiding near the courthouse on East Trade Street. A battle ensues, and although the “Battle at Mecklenburg Courthouse” ends quickly, it sets the tone for Cornwallis’s disappointing visit. On October 12, he leaves the county, famously referring to it as a “hornet’s nest of rebellion.”

1795—Eleventh president of the U.S., James K. Polk, is born on a farm near Charlotte. He lives there until 1806, when he and his family move to Tennessee, but eventually moves back to North Carolina to attend UNC Chapel Hill.

1873—Woodrow Wilson, twenty-eighth president of the U.S., spends his freshman year at Davidson College, before becoming ill, taking a break, and eventually enrolling at Princeton University.

November 9, 1914—Charlotte's Selwyn Hotel, which operated for nearly sixty years at the corner of Trade and Church streets, hosts the state’s first women’s suffrage convention. Women eventually gain the right to vote six years later in 1920 with the passing of the nineteenth amendment.

August 25, 1919—Five men are killed and several others are hurt in a confrontation with police, who are trying to protect Charlotte’s streetcar barns from trolley employees during a labor strike. Two weeks prior, streetcar operators had demanded higher wages and union representation, but when the Southern Public Utilities Company hired replacement workers, violence broke out, leading to the worst hostility in Charlotte labor history.

September 10, 1936—In the month prior to the official opening of The Mint Museum on October 22, 1936, President Franklin Delano Roosevelt stops in Charlotte to address the “Green Pastures” Democratic Rally, held at the newly constructed Memorial Stadium. On his way, he drives past the Mint Museum. His signature, along with that of his secretary, is the  first in the museum’s 1936 guest register. 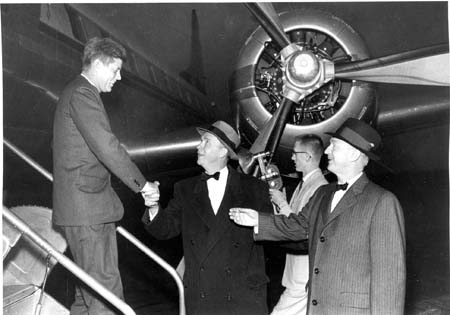 January 15, 1959—Senator John F. Kennedy attends the chamber of commerce’s annual dinner and delivers the keynote speech. The following year, he stops back in town, and is elected President in the fall.

1972—Jesse Helms switches from the Democratic to the Republican Party. The same year, he becomes the first popularly elected Republican U.S. senator from North Carolina since 1903. Even though his prior experience involves only one term on Raleigh’s city council, the Monroe native became the longest serving statewide Republican politician in state history.

1983—Harvey Gantt becomes the first African American to be elected mayor of Charlotte. It isn’t the first time Gantt has broken barriers. In 1965, he graduated with honors from Clemson after being admitted as the university’s first black student.

1992—North Carolinians elect Mel Watt to the U.S. House of Representatives. He becomes one of only two African American members elected to Congress from North Carolina in the twentieth century.