Touted as one of the best Greek festivals in the country, the Yiasou Greek Festival held at Holy Trinity Greek Orthodox Church in Dilworth features legendary food—even available for take-out—shopping, and entertainment. But what exactly makes a festival this size tick? Festival publicity coordinator Gloria Kontoulas and former event chairman Harry Stathopolous, who have been involved since the first one was held in 1977, share their insight on the four-day event. 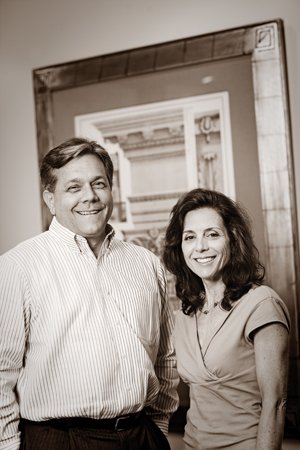 Tell us about the Greek community in Charlotte.

G.K.: We’ve certainly grown over the last twenty years. Harry and I are first generation.
H.S.: Our parents were immigrants. The biggest influx of immigrants was in the 1950s, sixties, and seventies. A lot of immigrants came to town, and in the last twenty years a lot of Greeks, but not immigrants, have come in from around the country to the Charlotte community. Holy Trinity was the only church in the area until 1968, and now there’s another church in south Charlotte and there’s a third mission-type church in northern Mecklenburg that was established two years ago.

Are the other churches involved in the festival?

H.S.: It’s Holy Trinity’s festival and you will have people from the other parishes participate, whether it’s making pastries or helping with the cooking. It’s one of the few Greek festivals in the country where everything is made from scratch.
G.K.: I always like to give those statistics. Those ladies in the church, they make as many
as 150,000 pieces
of pastry.

Since you’ve been involved with the festival since the beginning, have any years stood out more for you?

H.S.: Certainly some of the early ones. We were learning and the Greek community was so proud of being able to share with the greater Charlotte community the cuisine, the culture, and our faith. Greeks are very proud people. In high school my friends would come and watch us dance in a skirt—and as an adult I was proud of it!

What do you think the impact of the festival has been in Charlotte?

H.S.: We’ve been able to educate the community and let them experience the Greek culture and traditions, and some will come and want to learn more about our faith.
G.K.: Greeks are so eager to please. They want to share their traditions and tell everyone how to cook.

What else should we be sure to check out this year?

G.K.: There’s going to be a live presentation of the Spartan period of Greek history. Men will be dressing up as Spartan warriors, and that should be fun. Another feature for this year is our choir will have a choral performance singing traditional Byzantine hymns.

What are your favorite parts of the festival?

G.K.: My favorite part is I don't have to cook for four days.

This article appears in the September 2007 issue of Charlotte magazine.
Categories: Agenda > Conversation
Contest of the Month