Charlotte’s not the only city hosting motorsports fans this month

THE MINUTE I step off the plane and into Indianapolis International Airport, no matter the time of year, I know I’m in racing country. There’s race-themed dining (“Pole Position O-Rings” and “Pit Row Chicken”) and shopping, usually at least one race car on display, and checkered is practically the city’s official flag. When I arrive in May, there’s something else—a distant rumble of engines and the faint tinge of gasoline in the air—that reminds me of Charlotte. And if you’re a race fan and have to miss the beloved Coca-Cola 600 (or are looking for a change of race scenery), you could do worse than the Indianapolis 500, the other Memorial Day run and the largest single-day sporting event in the world, drawing around 300,000 spectators. But in Indy, the race is only part of a civic celebration that consumes the entire month.

The festivities get the green light not at the Brickyard, where the race is held just west of the city, but downtown near the pavers of Monument Circle. Indy’s monolithic centerpiece is the Soldiers’ and Sailors’ Monument, a 284-foot neoclassical limestone tower almost the size of the Statue of Liberty, topped with an observation tower, from which onlookers can take in a 360-degree skyline view of the city. (Indianapolis claims to have more historic monuments and memorials than any United States city outside of Washington, D.C.) On the first Saturday of May, 35,000 visitors are content with the street-level view as they gear up for a different race, the OneAmerica 500 Festival Mini-Marathon. One of the largest minis in the world, the relatively flat 13.1-mile course takes runners and walkers westward through the city streets, past pacesetting amateur musicians and bands, to the speedway, where runners do a lap on the historic 2.5-mile track before heading back downtown.

Of course, the rest of the action is centered around Indianapolis Motor Speedway. Covering some 560 acres, the track is a city within a city, and almost any day of the year, there’s something to do. Gearheads and historians can visit the IMS Museum, located in the infield and packed with trophies, memorabilia, and a priceless fleet of race cars from 108 years of running the Greatest Spectacle in Racing. Visitors can also take a bus tour of the actual oval, stopping to get off and, if so inclined, kiss the legendary yard of bricks, from the facility’s original surface, at the start-finish line. When the weather is warm, there’s also the Brickyard Crossing golf course—located partially inside the race track—that has hosted PGA and LPGA events.

In May, the quiet of museum tours and golf outings takes a backseat to the breakneck speed and thunder. Gates open the second weekend of the month for the first race, the INDYCAR Grand Prix, in which the cars take to the new, European-style road course that meanders through the infield. From then on, most weekdays and weekends, the track is open for Indy 500 practice and qualifying, a laid-back time to pack a cooler of food and beer, wander the vast, historic stands and garage areas, and get up close and personal with the machines, drivers, and mechanics as they tweak and tinker their way to the top of the pole. The engines don’t idle until Memorial Day weekend, when the music revs up for a Carb Day concert on Friday (rock acts such as Stone Temple Pilots and Train), a Legends Day show on Saturday (country artist Sam Hunt), and then, leading up to the big race on Sunday, the Snake Pit rave (electronic musicians such as Skrillex).

The Indianapolis 500 more than lives up to all that hype. Thirty-three drivers jockey three-wide into narrow turns and explode down long straightaways at speeds exceeding 200 miles per hour. After 200 white-knuckle laps around the hallowed oval, an exhausted winner is crowned, showered with flowers and the traditional bottle of milk—but it’s the fans who are truly worn out after a month of nonstop, pedal-to-the-floor fun.

Tiny House Hotels
There are many fine hotels in downtown Indianapolis, and a few near the speedway itself. But if you want to be in the middle of the action—literally—you might try the new Tiny House Hotel experience. Your group of four can book four nights in a tiny house planted smack in the track infield. Homes include refrigerators, personal showers, flushable toilets, and instant access—including all admissions—to a Memorial Day weekend packed with events.

Workingman’s Friend
234 N. Belmont Ave., 317-636-2067
Racing in Indiana, beneath the Saturday night lights of local dirt tracks and speedways, has always been a blue-collar pastime. That authenticity is enshrined at the cash-only “The Friend,” where you can sip ice-cold schooners of beer and dig into the best double cheeseburger, patties pressed and grilled to crispy edges, in the state.

Indianapolis Speedrome
802 S. Kitley Ave., 317-353-8206
If watching the pros run circles at the brickyard doesn’t quite satisfy your thirst for fuel injection, head over to the east side of Indy, where the semipros and local amateurs go at it on the intimate, one-fifth-mile blacktop of the Speedrome. A Saturday night features all classes, from go-karts to top fuel, culminating in the venue’s signature event, the Figure8, in which high-speed traffic crosses over in the middle of the track. The question isn’t whether or not there will be contact, but who will motor through the collisions to take the checkered flag. 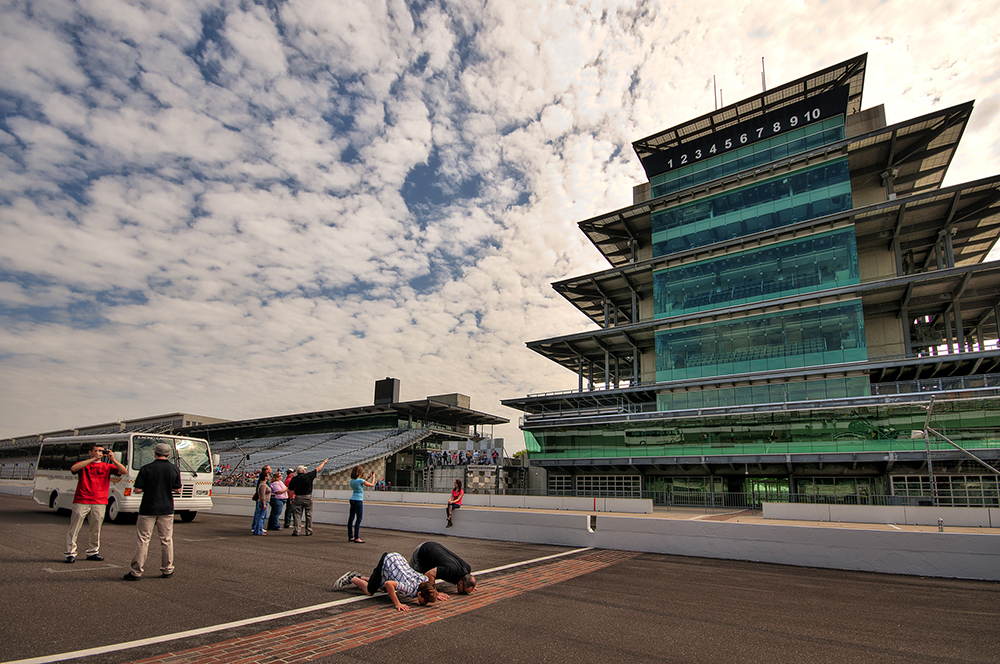 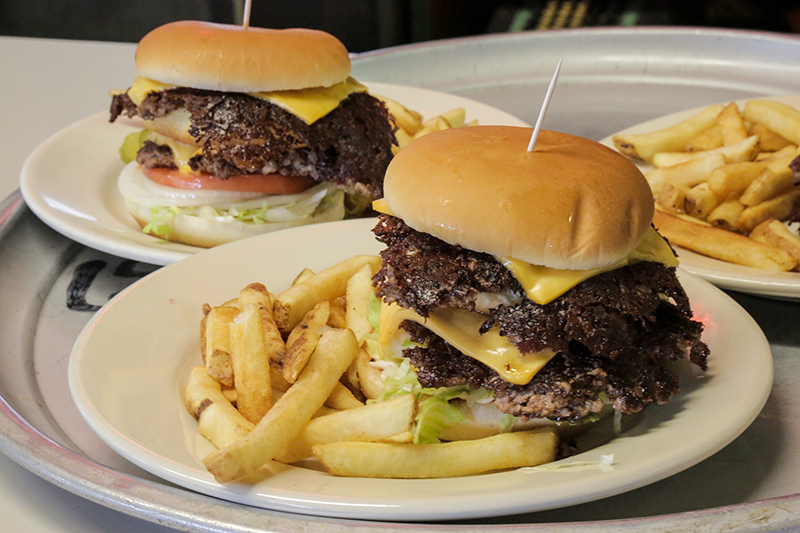 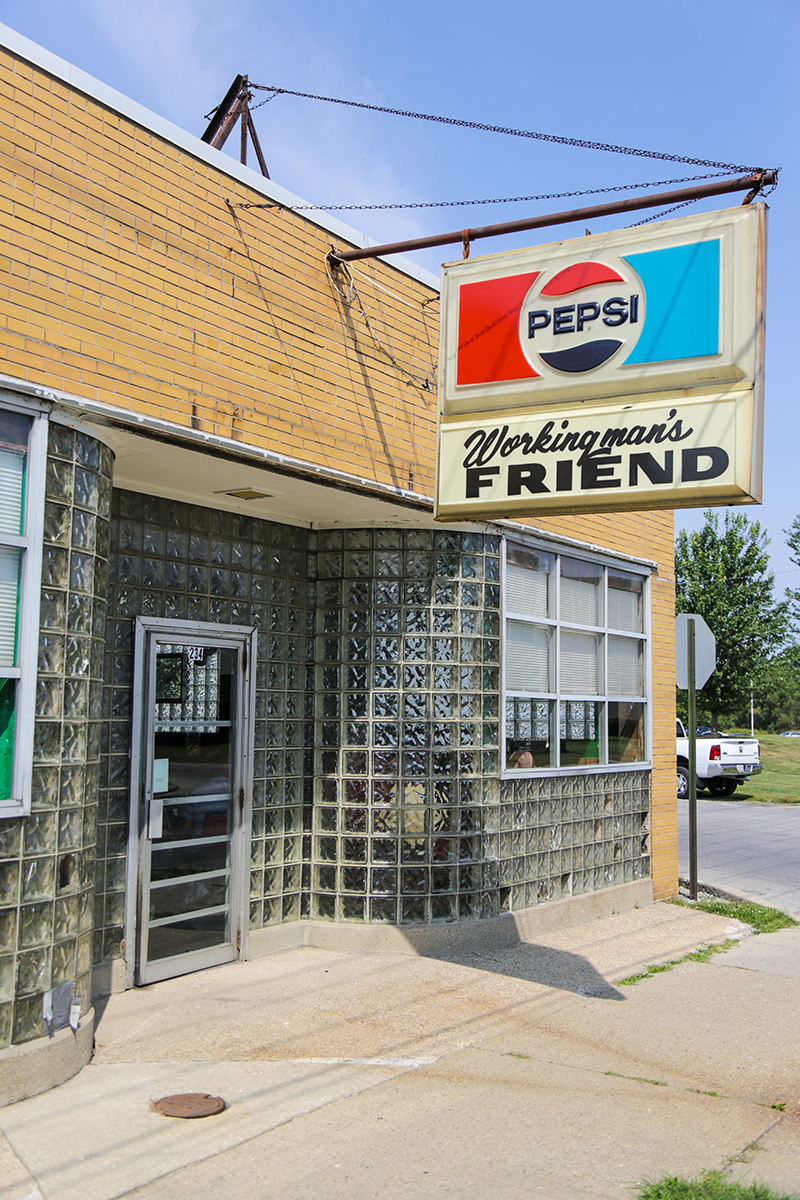 (From top) Visitors follow the tradition of kissing the bricks at the start/finish line at Indianapolis Motor Speedway; Workingman’s Friend is cash only and its beloved cheeseburgers come with crispy edges and hot, salty fries.

This article appears in the May 2018 issue of Charlotte magazine.
Categories: Direct Flights