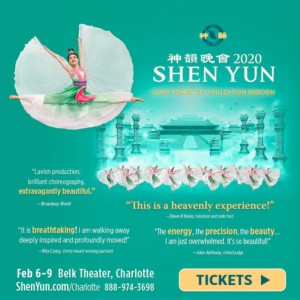 “It brings great hope…truly a touch of heaven.”
-Daniel Herman, former Minister of Culture of the Czech Republic

The culture of ancient China was divinely inspired.

Shen Yun invites you to travel back to the magical world of ancient China. Experience a lost culture through the incredible art of classical Chinese dance, and see legends come to life. Shen Yun makes this possible by pushing the boundaries of the performing arts, with a unique blend of stunning costuming, high-tech backdrops, and an orchestra like no other. Be prepared for a theatrical experience that will take your breath away!

A Heritage Once Lost

The traditional Chinese culture Shen Yun presents cannot be seen anywhere else in the world—not even in China. There, the ruling communist regime has viewed China’s rich spiritual and artistic heritage as a threat to its ideology and for decades tried to erase it.

But in 2006, a group of Chinese artists came together in New York with a vision: to revive the best of China’s cultural heritage and share it with the world. They drew courage and inspiration from their practice of Falun Dafa—a spiritual discipline based on the principles of truthfulness, compassion, and tolerance. The company’s repertoire includes important works shedding light on the plight of people like them in communist China today.

After a decade of performing around the world to sold-out audiences everywhere, Shen Yun has brought a great civilization back from the brink of extinction.

Shen Yun is now the world’s premier classical Chinese dance company. Some people fly from other countries or drive hundreds of miles to see it. Others see the same performance five or six times. Why? Many say there are no words to describe it—you have to see it with your own eyes to find out.

Join us for the experience of a lifetime.

In Partnership with the Falun Dafa Association of Atlanta

Feb. 19: "For the Sake of our Kids: Examining Stress, Success & Balance in Today's Pressure-Filled World"

In partnership with Trinity Episcopal School

Feb. 20: An Evening with Sutton Foster

In partnership with Queens University

Jan 10 @ 8:00 pm – Feb 1 @ 8:00 pm Warehouse Performing Arts Center
Running January 10th to February 1st 2020, the Warehouse will present what critics are hailing as a” guilty pleasure “ ( New York Times ). A spite-filled comedy about women scorned in Minnesota and the really, really nice gangsters— Norwegian hit men—they hire to whack their ex-boyfriends. Olive is a transplant from Texas and Betty is a transplant from Kentucky,...
Tickets
Ugly Lies The Bone

Jan 23 @ 8:00 pm – Feb 2 @ 8:00 pm Duke Energy Theatre at Spirit Square
Winner of the 2016 Kesserling Prize for Playwriting Newly discharged soldier Jess has finally returned to her Florida hometown. She brings with her not only vivid memories of Afghanistan, but painful burns that have left her physically and emotionally scarred. Jess soon realizes that things at home have changed even more than she has. Through the use of virtual reality...
Tickets
Vulture Venture

Jan 29 @ 1:45 pm Coco and the Director
Charlotte Uptown: Local to Charlotte, Rooted in North Carolina – Explore the flavors of Uptown on Taste Carolina Gourmet Food Tours guided walking tour of the city! You’ll visit several unique, independent restaurants to sample chef’s creations while learning about the history of the city and its culinary culture. This tour highlights locally sourced dishes made with artisan preparations and...
January 2020 Jan 2020
Subscribe