For the Love of Art

Over the past forty-seven years, Isaac and Sonia Luski have created a home full of museum-quality artwork. And they want to share it with you 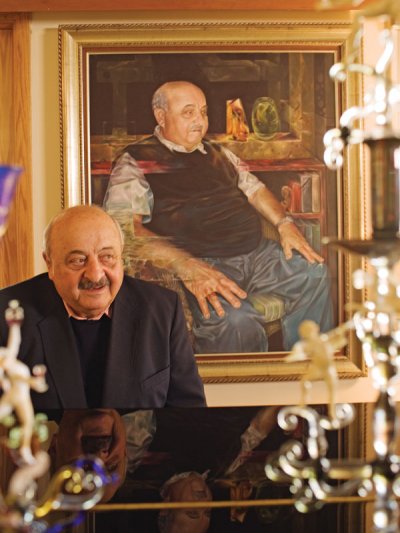 Isaac Luski sits in front of a self portrait in his SouthPark home. The Luskis began collecting art more than forty-seven years ago with the first piece by Cuban artist Rene Portocarrerro.

When Isaac and Sonia Luski left communist Cuba in 1960, they brought only four suitcases. Although they took few possessions, they wanted to bring artwork from their native country, so on the way to the airport, they visited Rene Portocarrero’s studio and purchased two of his paintings.

And that was just the beginning.

For nearly forty-seven years, the Luskis have collected artwork from around the world, from aspiring artists to well-known sculptors and painters. Their 6,000-square-foot Foxcroft home is filled with hundreds of contemporary, intricate glass pieces, vast landscape paintings and portraits, and even larger modern installations, all of which the Luskis want the community to see. For Isaac and Sonia, their love for art is as much about sharing as it is about collecting.

After a short time in Miami following their departure from Cuba, the Luski family settled in Charlotte, and Isaac and his brother, Abraham, started a real estate business. It was not until 1967, during a visit to the Penland School of Crafts, located about three hours from Charlotte near Spruce Pine, that the Luskis really began to expand their art collection. “We went to the Penland School and we were fascinated by what we saw, so we collected some pieces by Mark Peiser,” says Isaac.

As Charlotte began to grow, so did the family’s real estate business, thus the Luskis could afford to follow their passion for collecting art. And they take as much pleasure in collecting as they do in supporting artists.

“We collect art because we love it. Most of the time, we develop one-on-one relationships with the artists, and we maintain those relationships because there is chemistry,” says Sonia.

Walking into the Luskis’ home, it’s apparent that there are very few surfaces that are not adorned with art. Peiser’s cut and polished cast glass piece, Mountain Skyscape from his Innerspace series, radiates from among the other glass art on a brightly lit shelf by the entranceway. Two other prominent pieces, portraits of the couple, in the living room are by Cuban artist Conrado Basulto, an established Miami artist, whom the couple met when visiting another famous painter, Cundo Bermúdez.

Along the tiled atrium leading to the living room, myriad glass pieces reflect sunlight streaming in from windows facing the garden. Among this kaleidoscope of colors and shapes is Harvey K. Littleton’s Red-Blue Twist, which the Luskis bought while visiting Littleton at his studio.

Though avid collectors of the glass art found throughout their home, the Luskis love all genres of art. Paintings by Chuck Close and Louis Jones are displayed throughout the house while in the master bedroom hangs one of the original Portocarrero pieces they brought from Cuba, Cuban Madonna. Toward the back of the house in the family room, there are more pieces by Peiser as well as glass sculptures by Jose Chardiet.

Artists usually pick the work they want the Luskis to have. As a result, the Luskis are able to develop a one-on-one relationship with the artists in their collection.

“I admire the creative process, and it brings me great pleasure to not only collect the art but to support the craft,” says Isaac, who suggests that would-be collectors start collecting by being exposed to the arts. “Buy whatever you like, because you are going to live with it. Eventually you will develop your tastes.”

The Luskis also enjoy sharing their tastes. In addition to more than fifty pieces at the Mint Museum of Art and the Mint Museum of Craft + Design and a special collection in the North Carolina State Gallery of Art and Design, other works from their broad, in-depth collection of museum-quality artwork have been dispersed in North Carolina museums in Asheville and Hickory. The public can also enjoy works from the Luskis’ collection at several nonprofit organizations in Mecklenburg County, such as the Foundation For the Carolinas, ImaginOn, several library branches, Shalom Park, Presbyterian Women’s Center, and the Levine Children’s Hospital.

“We’re very proud of the pieces displayed at places like the Foundation For the Carolinas and ImaginOn because the public can see them at anytime,” says Sonia.

Although the bulk of their donations are in the region, the couple also placed several pieces in selected national museums such as the Corning Museum of Glass, the Museum of Arts & Design in New York, the Ogden Museum of Southern Art in New Orleans, the Columbia Museum of Art in South Carolina, and the Racine Art Museum in Wisconsin.

“We collect art because we love it,” Isaac says. “We give it away because we like to share it.”

This article appears in the Home & Garden June 2007 issue of Home + Garden.
Categories: Home & GardenFeature, Spaces
Contest of the Month