SINCE 1853 – yes, that’s right, 1853 – thousands of people have traversed North Carolina to get their hands on the most deliciously sinful food they can find. Why? Because it’s fun – and you only get to do it once a year.

After a century-and-half, the list of culinary (if we can even use that term for fair food) options has grown. Whether you’re looking to get a little nauseous and experiment, or need a surprisingly light and sweet delight to get your through the high-flying, head-turning rides, here are our top picks for each day left of the fair. 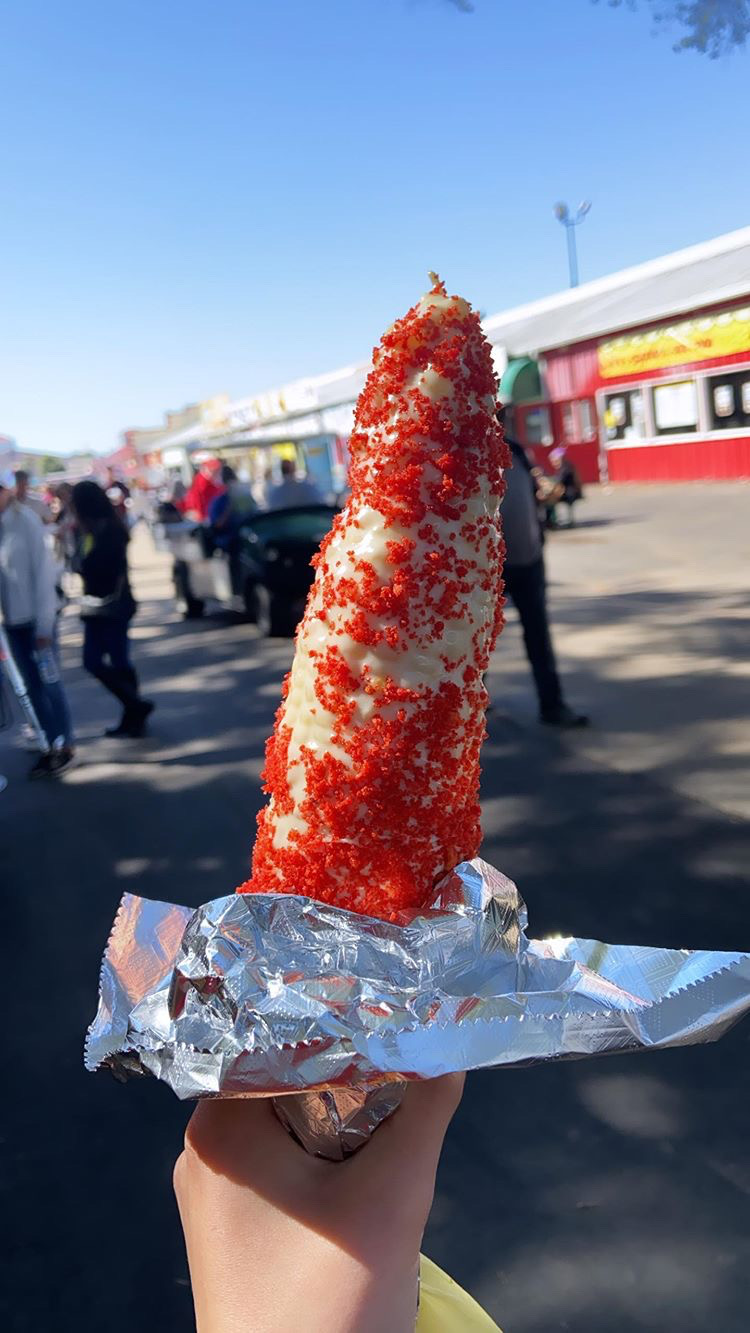 Making its grand appearance back in 2017, the FHC-COC (that’s what we’ll call it for short) might have been the simplest and most shocking addition to the state fair food scene. It’s a spicier take on the classic buttered dip roasted corn on the cob, and much better than this year’s newest corn take: roasted pumpkin spice corn. (My deep condolences to Starbucks pumpkin spice addicts.)

Roasted, slathered in mayonnaise (‘tis not cheese, we learned) and dusted in the most “healthy” serving of crushed Flamin’ Hot Cheetos and/or crushed Takis, the first bite might elicit fond memories of elote, Mexican street corn, from which this cob probably draws its inspiration. While Douglas Farms was the first to serve this now popular option, other corn stands have caught on. We found a vendor across the Sam G. Rand Grandstand, where the demo derby takes place. 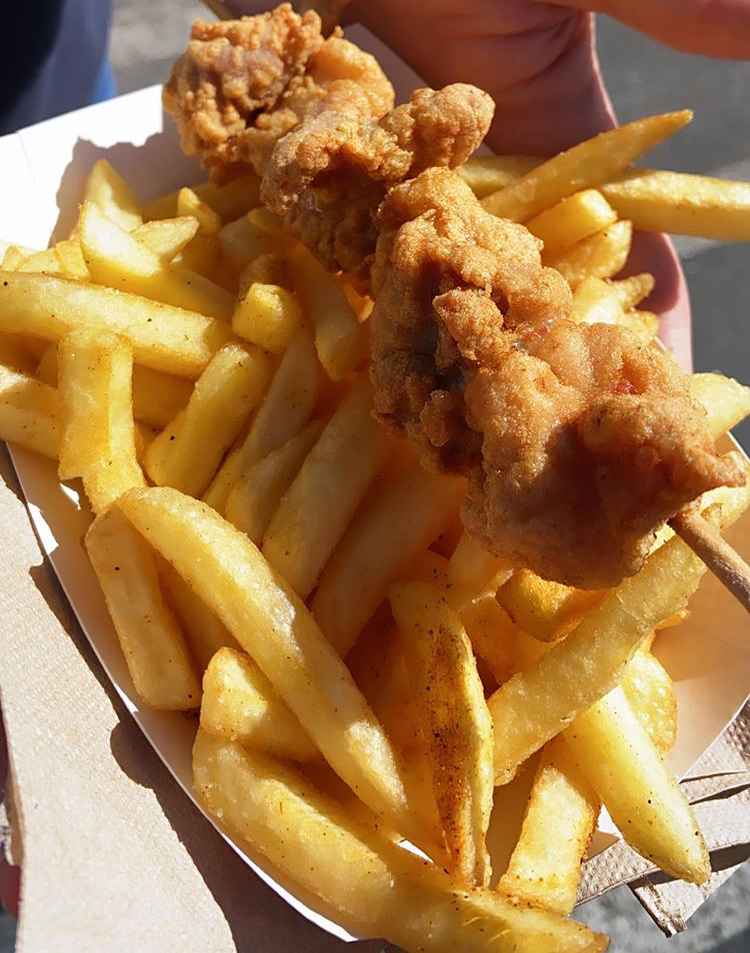 There’s every kind of imaginable deep-fried concoction at the fair. If you’re looking to keep it simple, but also still branch out, try the deep-fried alligator tail on a stick. It’s an unfamiliar meat, but it’s like a slightly more chewy chicken, and the skin isn’t too tough. It has a nice layer of fried breading, and the actual meat is incredibly juicy. Bonus:It doesn’t make you feel sick after you eat it! Plus, you can never go wrong with a side of fries, especially when they remind you of Bojangles’ seasoned fries. We found this decadent combo at Ragin’ Cajun’s booth, which is also near the grandstand.

If you want gator with a weirder twist, Chester’s Gators and Taters also introduced “Sloppy Mac Tater Skins” this year. These loaded sloppy joe mac ‘n’ cheese potato skins … we’ll stop there. You get the picture. 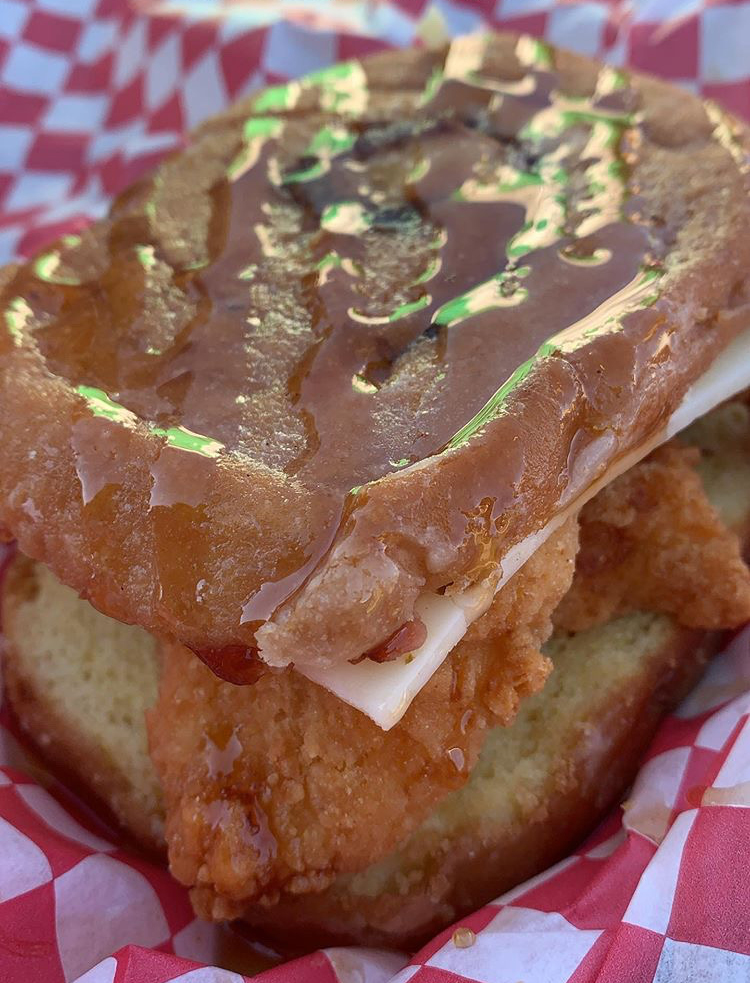 Now it’s really time to throw away your belts because you’re not lining up for any ride once your stomach gets a bite of this. Located across the restrooms in an orange trailer near the demo derby, Chef’s D’Lites is serving what many are calling the hottest fair item this year. Taking inspiration from the Krispy Kreme burger, this fried chicken sandwich with cinnamon rolls for buns is next level. Add some pepper jack cheese, bacon, and honey sriracha sauce and voilà, you’ve got a sweet, spicy and salty creation that can only be created at the fair. This might be a good one to split with a pal – and grab a lot of napkins.

This is the dish we’ve been waiting for all these years: something light and delicious that’s fine to eat before, after or maybe even during a fair ride. (The last part is questionable.) Located right across from the waterfall out J.S. Dorton Arena, Tropical Delights is a shining beacon of light during the increasingly fried foggy day. A small cup gets you an almost foot-tall tower of a soft-serve, sorbet-like tropical treat. You definitely get your money’s worth. We were playing the balancing act with this whip, which was a leaning tower of Pisa in a cup. You can also get it in a pineapple for a few more bucks.

Still full but want to make room for one more?

Peanut Butter Cookie Dough Cone. We got a sample right before leaving the fair and boy, did we miss out. Old Style Foods, the vendor serving it, said customers can purchase the cookie dough to-go, and it can last two weeks.

2022 Charlottean of the Year: Charlotte FC

2022 Charlottean of the Year: Christopher Warren-Green