Few Charlotte restaurants ever earned the grubby cachet of The Penguin Drive-In, a humble hole in the wall in Plaza Midwood that opened in 1954. For 60 years, The Penguin served mammoth burgers and fried pickles, even through the neighborhood’s rough years in the 1980s and ’90s. When it closed for good in 2014 after a flurry of lawsuits and family squabbles, longtime regulars mourned their beloved greasy spoon.

But that wasn’t the end for The Penguin.

Entrepreneur Martin Sprock, who founded franchises like Moe’s Southwest Grill and Planet Smoothie, purchased The Penguin’s trademark in 2018. Now he’s opened the new version in Dilworth, inside the building that was most recently home to The Mayobird and The Summit Room. To answer the obvious question: It’s not bad, but don’t expect any more than the faintest hints of the old days. 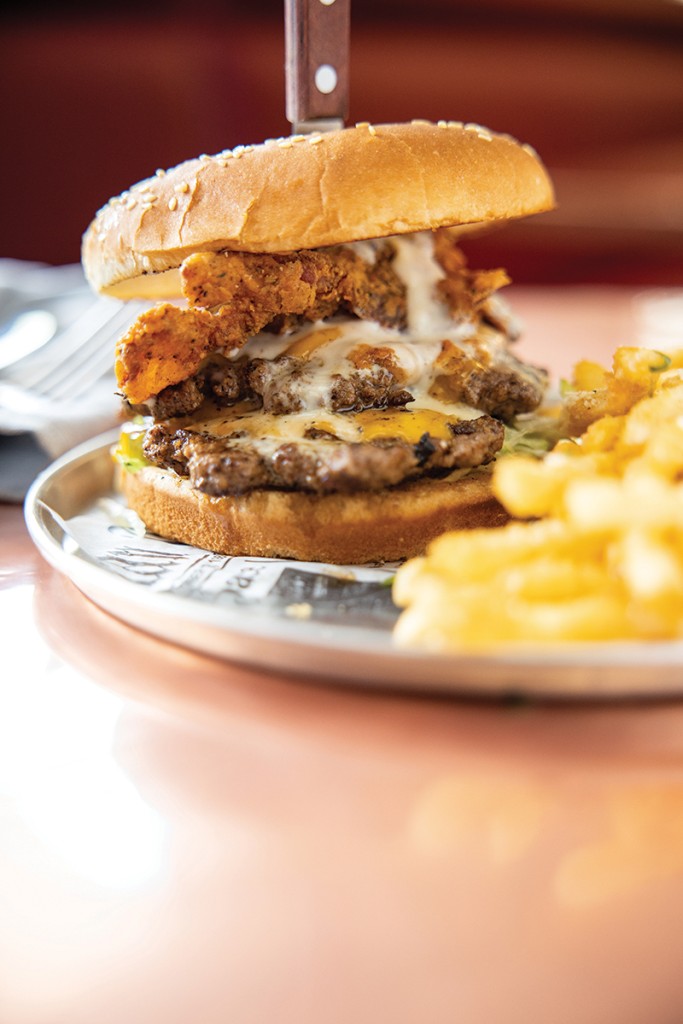 The Tommy Boy, topped with fried buttermilk bacon, cheddar cheese, and homemade queso, is one of The Penguin’s two signature burgers.

Sprock spent roughly $1 million to combine the two restaurants and transform the interior before the new version of The Penguin opened in September. The new design, with leather booths, distressed wood tables, and black penguin logos on servers’ T-shirts, pays subtle tribute to the original Penguin. The dog-friendly patio and $5 White Claws appeal to a younger generation that never knew the old spot.

Sprock kept a few favorites like Fried Pickles with original Penguin sauce, but most of the menu got an overhaul. Expect a mix of upscale bar food like Parmesan Truffle Fries and Thai Chili Wings, plus chopped salads, ramen bowls, burgers, and toasted subs. 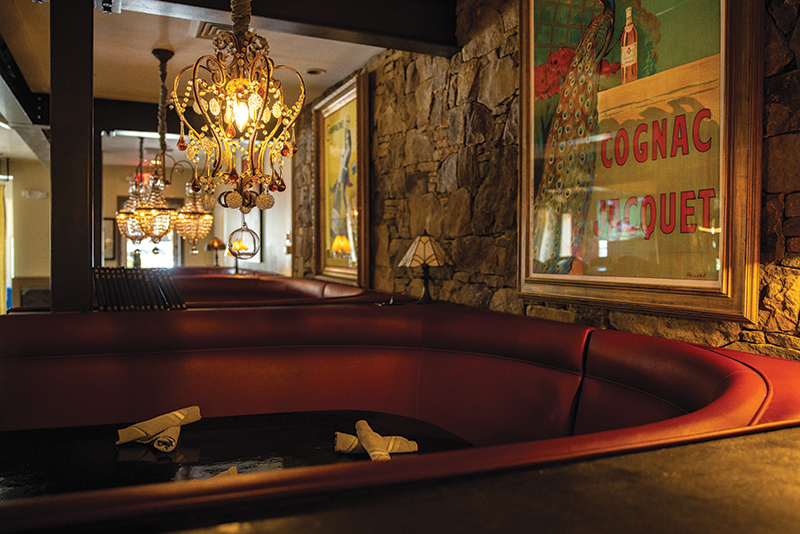 The Penguin’s new location on East Boulevard seats 160 inside and 75 on its patio. 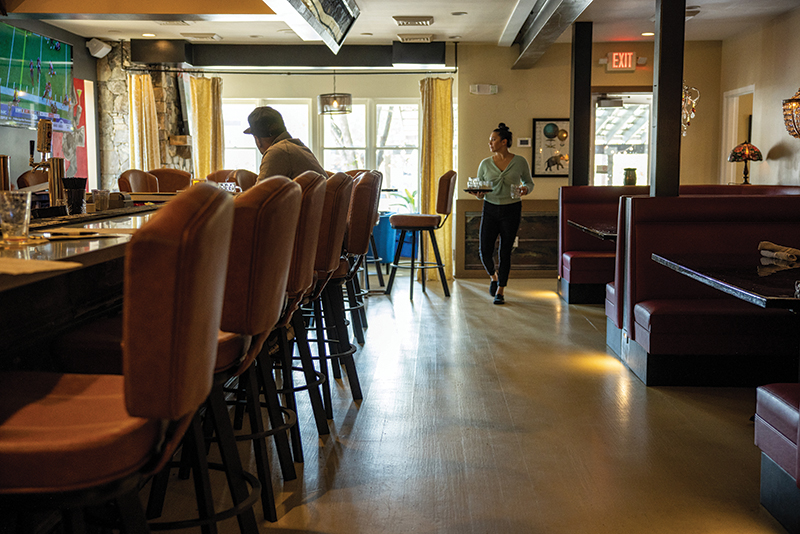 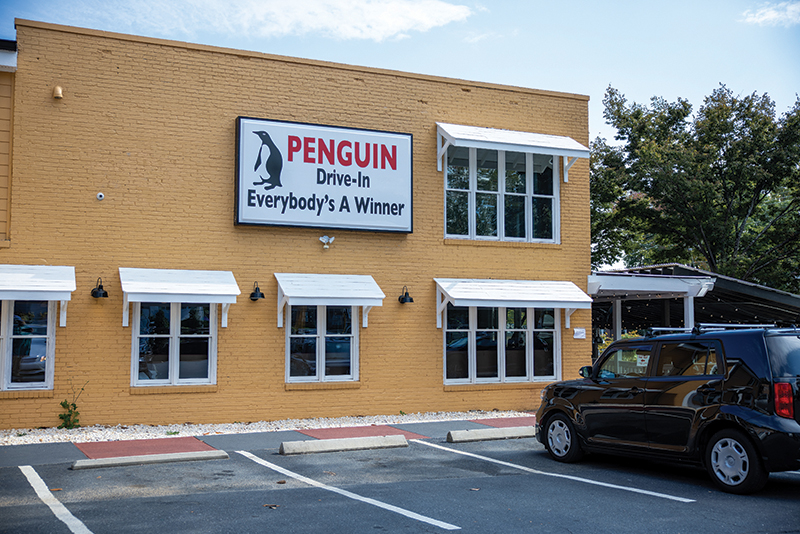 The bar has a solid selection of sparkling, white, and red wines, and the 8-ounce pours are a welcome surprise. Cocktails have names like Dino Hustle ($9.95) and Drunken Elephant ($7) and prices that don’t make you cringe like most cocktail bars in town. The draft beer lineup consists of just one lager, one IPA, and two pilsners, but each 16-ounce brew is $5, so who cares?

The ramen bowls are the wild cards. Both the Charred Pork Belly ($14.95) and Pan Seared Shrimp ($14.95) taste like excessively salty, Americanized versions of the Japanese noodle dish. A few handheld, Asian-fusion appetizers like cheeseburger eggrolls or lettuce wraps would make more sense on a menu like this. 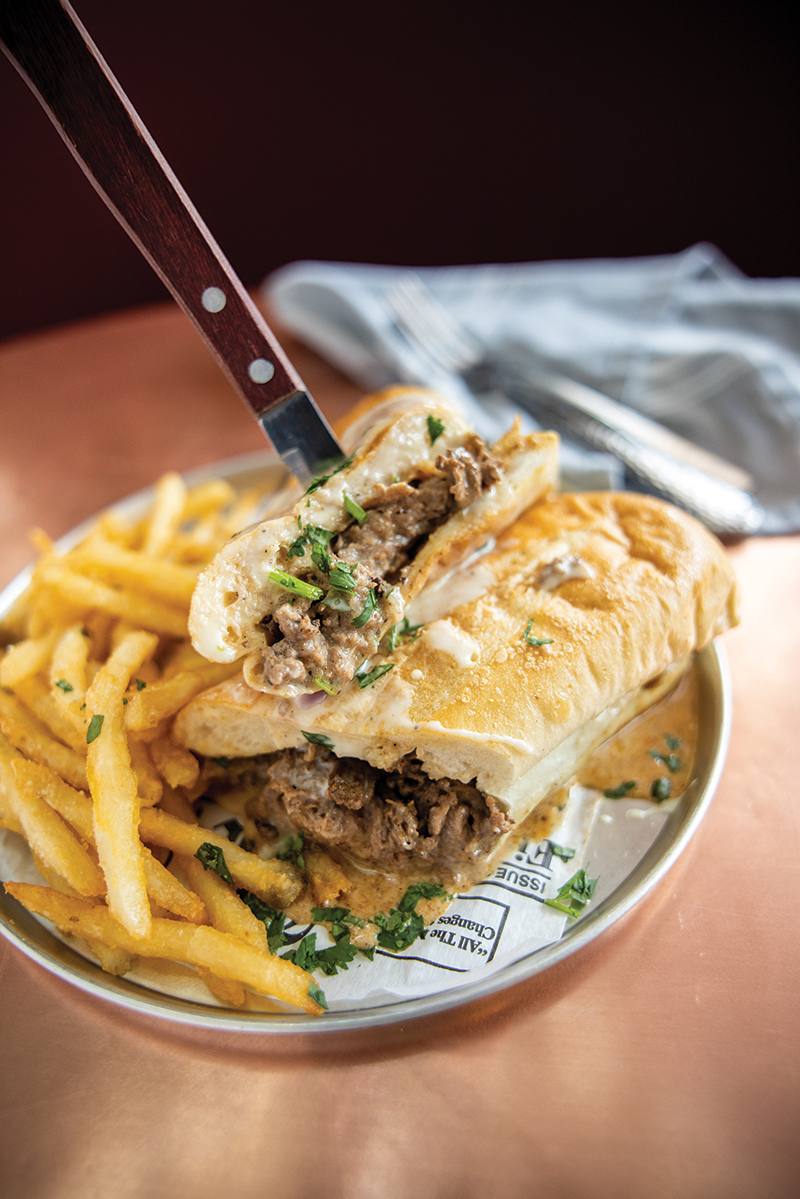 Both burgers come with two smashed patties and a steak knife through the center to keep them from toppling. These aren’t gourmet steakhouse burgers with three types of premium meat, though. The More Cowbell ($11.95) is smothered with mushroom gravy, Duke’s mayo, Swiss cheese, and shredded lettuce; the Tommy Boy ($11.95) has fried buttermilk bacon, cheddar cheese, queso, Duke’s mayo, shredded lettuce, and pickles. These are messy, condiment-heavy gut bombs you eat with a pint of beer after running the Booty Loop.

The toasted subs have names that rival some of your favorite craft beers. The Kiss His Ass Seabass ($12.95) is a mess of a sandwich with sirloin steak, Duke’s mayo, wasabi cream, Penguin mushroom gravy, queso, and caramelized onions. The Hike the Ball Nutjob ($14.25) has Thai-chili tempura shrimp, jicama slaw, and wasabi cream; the Gator Don’t Play That ($11.95) is stuffed with chicken tenders, bacon, queso, chipotle mayo, and pickles. Truffle Fries are an additional $3.95, but you’re already elbow-deep in meaty, cheesy mayhem, so you might as well order something to sop up your sandwich drippings.

The Best Dessert Ever (seriously, that’s what it’s called—and it’s the only one on the menu) is Ho Cakes ($6.95), a plate of Italian doughnut holes dusted with powdered sugar and drizzled with crème anglaise. The name might oversell it just a little, but these bite-sized fritters satisfy your sweet tooth, and that’s all you really need after heavy pub grub. 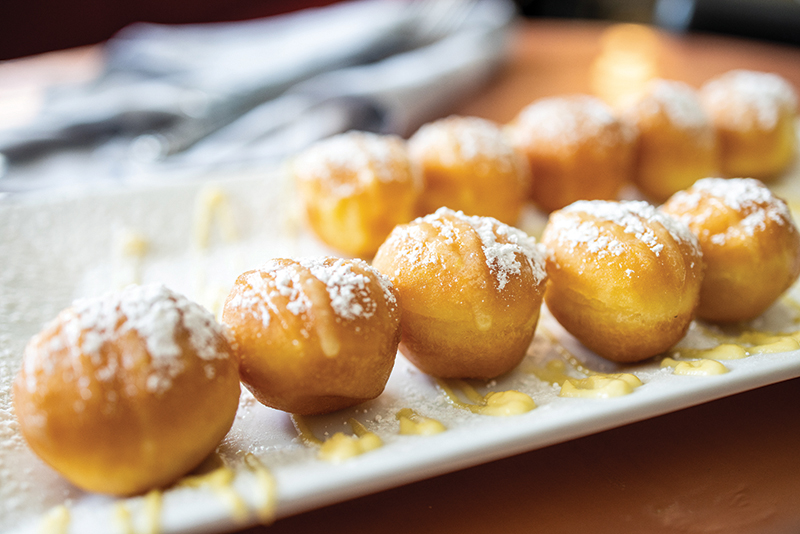 The new Penguin isn’t a venerable dive that’s likely to garner a visit from Guy Fieri anytime soon, but you don’t get the sense it’s trying to be. It’s just a fun, affordable spot on the most walkable stretch of East Boulevard, one that slings overstuffed burgers and sandwiches with funny names to customers who may or may not remember The Penguin that was.