Since NC Music Factory began its Friday Live! series a few years ago, it’s become one of the most popular weekly events in Charlotte. It’s an after-work-party-meets-live-concert-series, which isn’t uncommon around these parts. But what sets this seasonal series apart is that it takes place on a Friday—perfect for those of you who don’t like to come out on weeknights—and the great caliber of national and regional bands it features.

So for the next nine weeks, you have this as an entertainment option after you've punched out for the weekend. 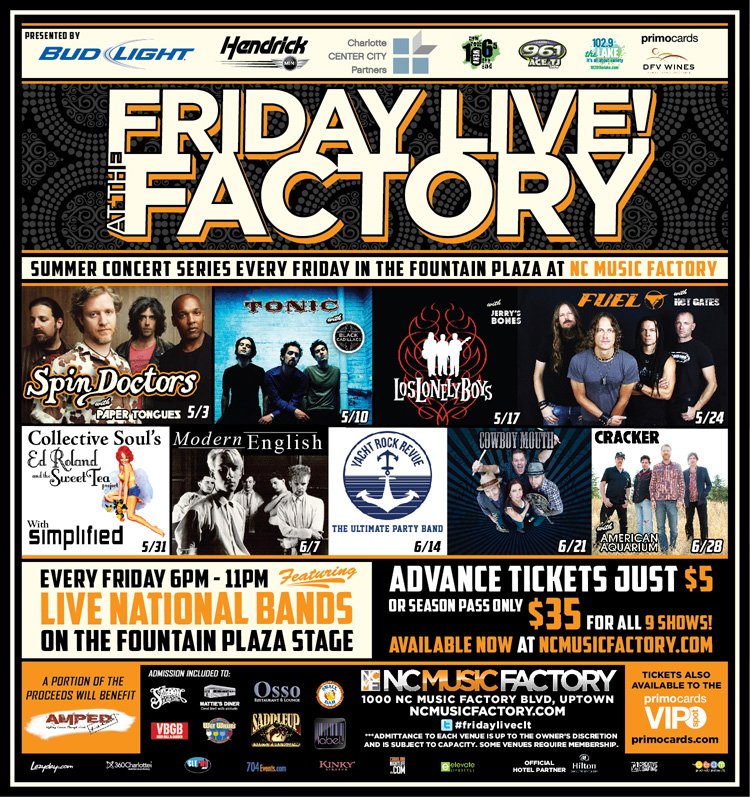 The event takes place each Friday, beginning at 6 p.m. and running to about 11 p.m. General admission tickets are $5 in advance ($10 day of the show), or you can purchase a season pass for $35. Plus, admission to Friday Live! gets you into several of the surrounding Music Factory venues, such as The Saloon, Wet Willie’s, Osso, VBGB, Label, new country-themed nightclub Saddle Up, and more. Visit ncmusicfactory.ticketleap.com to buy tickets. Fountain Plaza at NC Music Factory, 1000 NC Music Factory Blvd., ncmusicfactory.com.
Verify dates, times, prices, and other info at the web addresses listed for each event.
Be sure to bookmark www.charlottemagazine.com/Blogs/Dusk-Till-Dawn to stay plugged into Charlotte nightlife. Follow me on Twitter @HollidayInk; email me at jarvish@grownpeopletalking.com.
Categories: Dusk Till Dawn
Contest of the Month