From Rust Belt to Bible Belt

The long shadow of steel country

I grew up in Ohio, the son of a steelworker. My dad’s dad worked in the steel mill. So did his dad. So did my mother’s father.

They all worked, at some point, at Copperweld Steel, a massive complex stretching across 400 acres on the north side of Warren. The faded blue and orange buildings were shabby, made from corrugated steel. There were smokestacks reaching to the sky and rail lines at their feet. There was a big gate out front, where pickup trucks with laborers rolled in and big semi-trucks rolled out at all hours of the day, spilling out onto Mahoning Avenue under a sky that seemed to be overcast every day of the year. If you lived near Warren, this was where you worked. 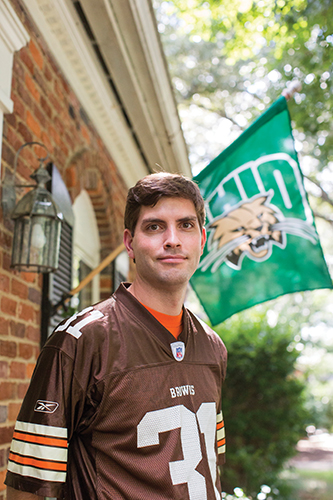 When I was 12, my dad took me on a tour. I wore earplugs and a hard hat. The floors were dirt. The furnaces and cranes were on a Brobdingnagian scale. The fresh ingots were glowing orange. We walked into the melt shop. I watched as electrodes were lowered into a gargantuan blast furnace. Sparks flew in front of my eyes.

The sound of the glowing elements hitting the scrap metal was the loudest electrical buzz I had ever heard in my life. The heat blew into my face. The noise resonated in my chest. I was there only that one time. My father was there every day, or at least on the days when he was between layoffs.

I never intended to work at the mill. Instead, I graduated from high school in Cortland, Ohio, just a few miles from Warren, went to Ohio University, and then started moving south. I stopped first in Huntington, West Virginia. From my sixth-floor apartment window, I could see coal trains chugging along on tracks that ran through the center of town and coal barges plodding through the water of the Ohio River to the north.

People in Huntington asked me a strange line of questions. First, they’d ask if I was a student at Marshall University up the street. No, I’d politely say, I’m out of college. Then they’d ask if I had family in town. No, I’d say, I don’t. Without fail, they’d pause before asking the clincher: So, why exactly are you here?

I was working at the local NBC affiliate, but before long, that wasn’t a very good answer. Like Warren, Huntington was a decent town in most spots, but also like Warren, it couldn’t give me what I wanted out of life at 24. I moved the next year to Charleston, West Virginia, to an apartment in the shadow of the glimmering gold dome of the state capitol, hoping a change in venue would do me good. It didn’t.

A friend called one day and asked if I’d ever want to work in Charlotte. I hadn’t thought much about the place, but it seemed nice enough, and a job opened up that fit me. I applied, got it, and moved.

Immediately, I found Ohioans here. My first year, I lived at Eastover Ridge, which was as much a party venue as an apartment complex, and I found several Ohio University grads in the building across from mine. We hung out. From time to time, I’d bump into people I’d gone to high school with in my small hometown of 6,000 people. I started going to Browns Backers parties every Sunday in the fall, suffering through season after season with my fellow members of the Northeast Ohio diaspora. I dated a girl from Ohio for three years, and as we started to run out of things to talk about, we always had the crutch of talking about how this place was nicer than where we had been.

Charlotte was the first place I’d lived where droves of people weren’t actively trying to leave. When it politely rained here, there weren’t terrible West Virginia-style floods, the kind that loosened up a hillside and thrust it into an already swollen creek. When people left high school and went away to college, they actually wanted to come back. It was a strange feeling. If you lived in Charlotte, it seemed, you didn’t automatically come with a tale of woe. Yeah, maybe you had something you’d overcome, but you weren’t from Youngstown, man. You didn’t escape like we did.

I’ve never felt like I’m in the South in Charlotte. Sure, you do get the colloquialisms, the bless-your-hearts and the sweet tea and the offers of grits that I always turn down, but it is possible to exist in Charlotte in much the same way as you existed in Ohio. Or Pennsylvania. Or New York state. It is possible to move and yet not really move at all.

I like to joke with people and say Charlotte is Cleveland’s biggest suburb. Or Buffalo’s. Or Pittsburgh’s. And although North Carolina is number one on the list of states where new Charlotteans come from, in the aggregate, roughly two-thirds of us come from other states. The IRS keeps tabs on who’s moving where by tracking changes in the addresses on your tax returns. In 2010-11, the most recent year statistics are available, 2,877 Union Countians moved across the border into Mecklenburg, making it the single biggest source of new Charlotteans.

Out of state, Atlanta, Chicago, Los Angeles, and South Florida are the top metropolitan areas that contribute to Charlotte’s population. Among states, Ohio actually ranks seventh on the list, but that doesn’t count the phenomenon known as half-backing—Ohioans who move to Florida, decide they miss changing seasons, and move halfway back up.

Cleveland is a straight shot up Interstate 77, an eight-hour drive if there’s no traffic. The farther north you go, other interstates shoot outward from it like limbs on a tree. Interstate 79 runs up to Pittsburgh and Erie, Pennsylvania. Interstate 81 runs up through the mountains of Virginia and into upstate New York. Interstate 64 runs west through Huntington, West Virginia, on its way to Kentucky. But the trunk of the tree is still I-77, carrying people from all of those other places, the main artery for a new migration of people who want to find work and be productive, who want to find a place where it’s warmer but there are still seasons, where the leaves still fall from the trees and the snow is so rare that it can be enjoyed instead of constantly shoveled.

Charlotte grew up as a mill town, the remains of which aren’t rotting like the old steel mills up north but now stand as testaments to history that conveniently double as breweries and apartments. On some level, the mills might be part of the reason we Rust Belters connect with this place. Textiles and steel share the same sad story, crippled in the United States by a global marketplace that figured out how to make the same stuff at a lower price overseas. When the mills closed here, though, eventually more banks opened. The interstate banking laws that made Bank of America possible also made Charlotte’s incredible growth possible. Steel and cloth are commodities. But money to loan is the secret to success.

The South, or at least the idea of the South, has traditions that are slow to change. Southerners are proud of their pace and proud of their sense of time, elastic as it is. But Charlotte seems to quickly find other things to do when its main industry goes bad. Textiles died. Banking arrived. When the banks took a hit during the recession, Charlotte decided to call itself an “energy hub,” and to my amazement, that prophecy is starting to become self-fulfilling. Charlotte is an industry town, but it’s nimble enough to change industries when it needs to.

That hasn’t been the case in Ohio. Copperweld, the company, is no longer a part of my hometown, but the plant is still there. It’s mostly silent now. Gone are the days when steel bars rolled off the line one after the other. The place opened in 1939 and became an elite maker of specialized parts for use in SUVs and nuclear power plants. It cranked out shell casings around the clock during the first Gulf War. In 2001, the mill closed, just after the company that owned it spent millions on improvements as the bottom dropped out on the American steel industry. When Copperweld closed, it took 1,200 jobs with it—jobs that would not come back, at least never at the same number or salary.

What happened at Copperweld happened all over Northeast Ohio and Western Pennsylvania. LTV closed in Cleveland. The old Republic Steel in Youngstown closed. Sharon Steel is gone. In Youngstown, September 19, 1977 is still referred to as Black Monday. It was the day that Youngstown Sheet and Tube announced that most of the mill would close. Five-thousand people lost their jobs.

Since then, people have fled the Mahoning Valley. In 1930, 170,000 people lived in Youngstown. In 2010, that number was 66,982. The mills remain, silent and rusting, reminders of what used to be. Ten years ago, the head of the local film commission talked about what he thought was a win-win situation for action movie producers and the city. “Unlike most cities where they don’t want you blowing things up,” he told Reuters in 2004, “around here they’d be thrilled to death if somebody came here and blew some of this stuff up!”

My father left Copperweld before it closed. He decided that he needed the education he’d always wanted for us, and he graduated from Kent State with a degree in electrical engineering in the late 1980s. In 1995, he got a job at General Motors’ sprawling assembly plant in Lordstown, Ohio, where they make the Chevy Cruze. He improved himself. But he stayed.

From time to time, he and my brother call me, asking about Charlotte. It’s so nice down there, they say. Would we fit in?

More than you know.

Jeremy Markovich is a contributor to NBC Charlotte, Our State magazine and SB Nation longform, and a columnist for this magazine. He can be reached at jeremy.markovich@gmail.com.

This article appears in the September 2014 issue of Charlotte magazine.
Categories: Feature, The Buzz
Contest of the Month