For a year, we tried to sell our hundred-year-old home, which sits in the heart of Myers Park's bulldozer alley. We gave up, and I think our house is glad

I once read some advice about clothes that have a penchant for trouble. You know them — the dress that drops a strategic button into your lap as you lift a fork at a dinner party. The cream silk sleeve that trails through chocolate mousse at the buffet. The pant hem that grabs for a heel and rips itself open as you walk up a flight of stairs with your new employer. These clothes are out to harm you, and no amount of dry cleaning, mending, pampering, or premium real estate in the closet will distract them from their mission. Do not show mercy, the author advised. Dump them. 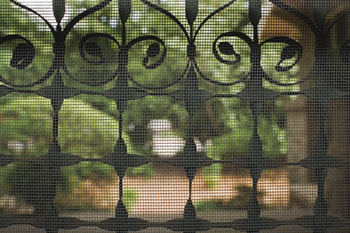 If clothes have personalities, do houses? I think ours is trying to hang onto us. It's not malicious, just desperate. For nearly a year it was on the market, but it refused to be sold. Friends said it was the economy, the realtor said it needed time, we said drop the price. But in the end, it didn't sell and we gave up, deciding to regroup. I think this old place heaved a deep sigh of relief. It was scared.

It should be. We live in bulldozer alley in Myers Park. When we first moved here eight years ago, I thought the construction on nearby Beverly Drive and Sherwood Avenue was temporary, and that the delays going to and from work would soon end. Wrong. Very, very wrong. I've lost track of how many houses have been torn down. There is more construction now than before, and the outcome is divided between the sublime and the ridiculous. There are some beautiful homes, like a lovely brick two-story going up right now on Sherwood. The house has breathing room, it is well placed on the lot, it looks right. Then there are other houses — I won't mention my neighbors' addresses — that seem poured into their lots like a woman wedged into embarrassingly tight pants. Bigger is better, even if the seams are close to tearing; the notion of exercising self-restraint out of respect for the neighbors is, well, a notion. Which is to say, something that requires thinking.

Perhaps our old house has been silently watching these changes and taking note. If dogs talk in a language unintelligible to humans — remember Lady and the Tramp?—then maybe houses do the same when it's dark and the night is still. I can just imagine our stalwart, modest bungalow swapping stories with neighbor houses after hours. It was built before there was a Myers Park, around 1910, when going out on a Saturday night meant taking a horse and buggy, or maybe a new Model T Ford, just a year old, to see a silent film. Russia was still ruled by a czar and Germany by a Kaiser; the Titanic was under construction in a Belfast shipyard. These spacious rooms with high ceilings and polished heart pine floors have witnessed an MGM panorama of changes since then. Wars, epidemics, hurricanes, and fires have swept past like footage from a Cecil B. DeMille movie. Still, she stands.

We put our house on the market August 1, 2007, ready for a change. The floor plan that had attracted me to the house no longer worked; a master bedroom on the ground floor had been a great idea when teenagers had free reign of the second floor. Once they left home, however, the upstairs fell out of favor. Nieces, nephews, and eventually grandkids didn't want to sleep up there alone; they defaulted to the sofa or to an air mattress in the office. Like the elderly, buildings with age creak and groan during the night, giving credibility to tales of monsters that hide under beds and in closets. It was impossible to put my foot down. When my niece would shake her head of brown curls and say, "I don't want to sleep up there," I nodded in sympathy. I knew exactly how she felt. Off went the sofa cushions and out came the sheets and blankets and pillows. Under this roof, "good night" would remain as it was intended: good.

That story you've always heard, about the first offer being the best, turned out to be true. In fact, it turned out to be our only offer. But in the early fall of 2007, just weeks after listing our house, we weren't ready to believe our best shot had already arrived, $45,000 lower than our asking price. The offer seemed ridiculous. The buyer knew it and even apologized. He came by one day, unannounced.

"We are going to make an offer," he said, startling me one morning when he walked up our sidewalk and introduced himself — I thought things like this didn't happen when you hired realtors. "Please don't be insulted. We're serious," he entreated. I invited him in and he sat on the sofa and asked me about the house's history. A young business owner with a strong artistic bent, he and his wife lived in Davidson and had been searching for a house like ours for three years. They loved the historic design, and as we talked about architecture I could see he had the sympathy required to live in a building nearly a hundred years old. Our home had its peculiarities. It wasn't a cleaning service kind of house.
Confident and perhaps cocky, we budged only slightly in our counteroffer. The couple departed and we settled in, knowing a more reasonable offer would soon come our way. We didn't know that things were drastically slowing down, or that the nation was entering a housing crisis. Our realtor didn't mention that sales in our area were down 30 percent from the same time a year earlier. The market was changing dramatically. We were blissfully ignorant; we were hopeful. The weather turned cool, bringing a steady stream of interested buyers. Expecting an offer any day, we shopped for a new house, found one, made an offer, got a contract, and then lost it weeks later when the owners got a better offer with no contingency. Eight weeks passed, then twelve, and a new offer on our home did not materialize. Outside, the leaves fell; inside, I felt bare.
The holidays, needing a home, showed up at the appointed hour and pulled me, reluctantly, into their current. Mindful that a showing could be scheduled at any time, with potential buyers traipsing about, I edited my holiday spirit. Just as I had taken down photographs and mementos when we listed the house, I now opted for an impersonal exuberance. Like a scene inside a snow globe, the house was sparkly yet unreal. Pilgrims and pumpkins yielded to strings of Pottery Barn stars on the porch, a crèche draped in pine boughs, and a Christmas tree shorn of sentimental trappings. A lollipop angel and craft-paper snowflakes, bearing a faint trail of glitter glued on years earlier by a toddler, went back into the attic, too tattered and sacred to share with a stranger. Shepherds kneeled in the straw, gazing at the manger. I gazed out the window at the sign on the street.

The winter dragged by; I missed my possessions that were locked up in a storage unit like puppies whining to be let out. Friends were amazed by my streamlined look — "Wow! Everything is so clean!" I moaned that my home felt like a hotel. Up and down our street, houses were for sale, but like ours, they sat. The house directly across the street was for sale, and the house next door, a speculative remodel, was for sale. Nothing moved. Prices began to drop. Still nothing happened.

At last, spring arrived, and with it, new hope. As the daffodils and tulips came and went, then azaleas, the phone calls from Centralized Showings tapered off. We dropped our price. By June, the soft white gowns of magnolia blossoms drifted to earth, scattering a heady scent across our front porches. Weeks passed and the blooming ended; petals turned brown, falling into the brittle, molding leaves under the trees. It was the hottest June I could remember.

I'd had enough. Our realtor advised us to withdraw our listing instead of letting it expire. One Sunday afternoon I got up from my seat at the wicker table on the screened porch and walked out to the yard. The posts of the iron sign had to be wiggled loose from the packed dirt; on my way down the driveway I dumped the fliers in the trash. Returning to the wicker chair, I sipped coffee and studied the seedpods that were forming on the magnolia trees. This house had a hold on me, all right. It wasn't letting go.

We keep loving this old place. While other houses lose their insides in surgical procedures that implant shiny stainless appliances, this one hangs on to what it has — thick Wedgwood blue tiles, an unheated laundry, a quaint butler's pantry with a swinging door. I grew up in a turn-of-the-century house; I like the feel of age. An original well under the deck, coal fireplaces, and rippling glass panes are like the folded corners of a favorite book; they remind one of special places in a long story, of memories from another time. Did a radio play in the front parlor, did someone lean in to follow Seabiscuit's triumph over War Admiral? Babe Ruth's hits out of Yankee Stadium? These heavy plaster walls withstood the British Invasion of the 1960s and the bulldozer invasion of the last two decades. I hope the next caretaker shows it the respect it deserves.

This article appears in the October 2008 issue of Charlotte magazine.
Contest of the Month