Eighteen-year-old Aiden Kelly was a sophomore at Pine Lake Preparatory in Mooresville when he came up with the idea for Kellys’ Community Kitchen. He wanted to recover unused ingredients and surplus food from restaurants and redistribute them to people in need. He hoped to go into the public health sector someday, and this seemed like a good place to start.

Aiden’s father, Brendan, who paid his way through college working in restaurants, was thrilled to help. His job with Bank of America provided a comfortable lifestyle for their family, and they’ve always prioritized giving back to the community. “(Aiden’s) bright enough to realize that he’s very fortunate,” Brendan says. “We’re very environmentally minded, but we eat out a lot and waste as much food as anybody else. Sometimes you forget to tread lightly on the earth at a household level.”

They discovered, per the USDA, that 40% of all food in America goes uneaten. Food goes to waste at every stage of production and distribution, from farmers and manufacturers to retailers and in homes. The Mecklenburg County Health Department classifies more than 150,000 people in metropolitan Charlotte as “food insecure,” which means they lack consistent access to enough food for every person in their household. “Access to food is a basic human right,” Aiden says. “I can’t make people take a vaccine, but this is one area in public health where I can make an impact.”

In early 2020, they decided to start in their own backyard—literally—and approached River Run Country Club, near their home in Davidson, about letting them recover excess food from their restaurants. They wanted to focus on uncooked foods, like veggies that weren’t attractive enough to serve the country club diners or proteins that were thawed or par-cooked and couldn’t be saved. They would pick up the food, take it home, and cook meals to package and distribute.

But they quickly discovered how hard it would be to carry out this good deed. River Run Country Club didn’t want to be held liable if the Kellys weren’t safe guardians of their food. Organizations like Loaves & Fishes, which recently merged with Friendship Trays, didn’t want prepared food because they can’t be sure each meal has been cooked or stored properly. Loaves & Fishes distributes only nonperishables and grocery items like cheese, milk, and eggs people can use to prepare their own meals, says Sue Bruce, the organization’s marketing director.

So Aiden did some research and learned they’d need to set up Kellys’ Community Kitchen as a nonprofit. If they became a 501(c)(3), the Kellys and their donors couldn’t be held liable if someone got sick after eating their food. It took several months to file the paperwork, though, and COVID continued to rage. 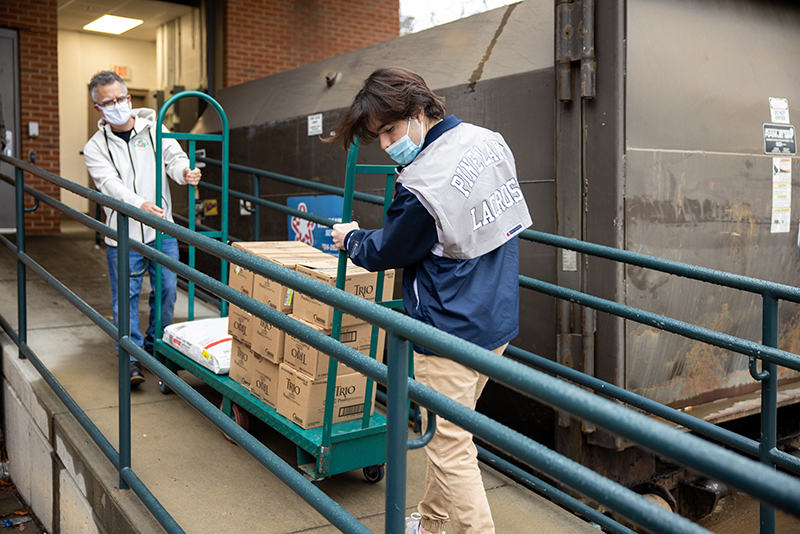 Brendan (left) and Aiden, shown here at UNC-Charlotte, recover an average of 150 pounds of uneaten food each week.

When Aiden and Brendan picked up again in 2021, River Run had cooled to the idea of their food recovery program, and as restaurants struggled with supply shortages, there wasn’t as much leftover food. That’s when Aiden got the idea to target colleges. He found plenty that were willing to help, but most didn’t have a surplus of raw ingredients to donate, and food pantries like Second Harvest were already scooping up dry goods.

What they did have, though, was leftovers. So Aiden and Brendan changed their approach and partnered with Belmont Abbey College and UNC Charlotte dining services to take their excess prepared food. But soon, they encountered yet another hurdle: They were taking in far more food than they could safely and quickly repackage or store in their home. “Plus, our target audience had been Tent City,” Aiden explains. “We were going to truck the food down there on Saturdays and hand it out, but then they got shut down.”

Instead, they got commercial catering bags and coolers and trucked the food to FeedNC, a Mooresville-based food pantry that takes in excess perishables to cook, serve, or package. Today, the Kellys estimate they rescue an average of 150 pounds of food a week, and on any given afternoon, UNCC’s dining hall might have 100 pounds of leftovers or 500 loaves of bread they can’t serve. Brendan and Aiden pick it up, pack it in coolers, load it into their trunk, and deliver it to FeedNC. “Right now we don’t cook anything,” Aiden says. “We’re just the connector because we’re willing to do the dirty work.”

They haven’t given up on the idea of cooking and serving in the future. Aiden’s 16-year-old brother, Liam, wants to pilot a household-level service in their Davidson neighborhood by going door to door to collect produce and perishables to cook and package.

“A lot of people don’t want to talk about this stuff, but these aren’t just people under the I-277 bridge,” Aiden says. “They’re in our backyards and can’t get their nutritional needs met.”

“We’re just reallocating resources,” Brendan adds. “We meet plenty of resistance. … But what’s weird about diverting unused food from the landfill and into somebody’s belly?”