‘How the Hell Did We Lose It?’: The CIAA Tournament’s Epilogue

This year marks the last installment of a weeklong party held uptown for 15 straight years. Will it come back?

OVER ITS 15 YEARS IN UPTOWN, the CIAA Basketball Tournament has been a celebration, a reunion, an economic powerhouse, an archipelago of parties, a validation of a sports and entertainment arena many people didn’t want, a defense of uptown’s capacity to entertain people of all ages and even after midnight, and a display of damn good basketball.

The fact that 2020 is the last of those 15 years does not sit well with Malcolm Graham.

“How the hell did we lose it?” Graham asks rhetorically. The graduate of Johnson C. Smith University, one of the 12 historically black colleges and universities that make up the Division II conference, lobbied for the tournament as a City Council member in the early 2000s; he was re-elected to the council in November. “The people in the office towers went to UNC, Duke, (N.C.) State, Virginia, and not Smith, (Virginia) Union, and Livingstone, so some of those guys never really got it. I thought we didn’t fight hard enough to keep it.” 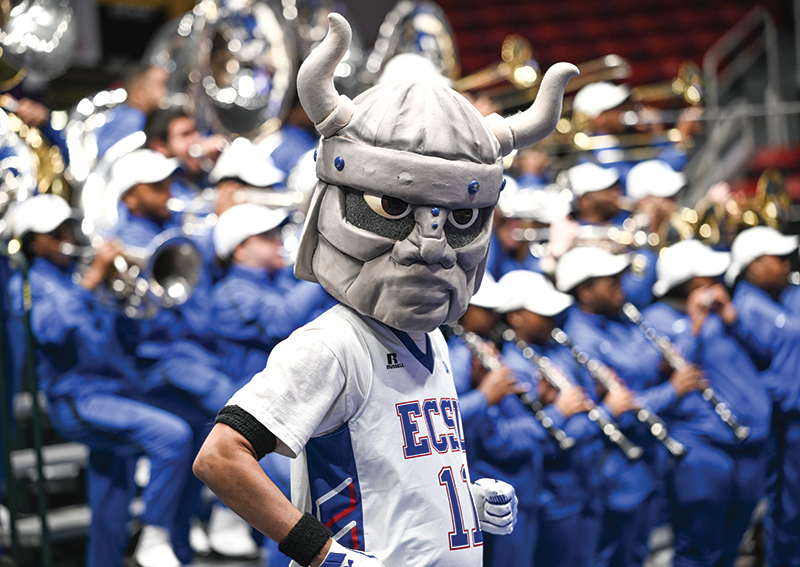 The Elizabeth City State Vikings women’s basketball team, accompanied by its mascot, made it to the CIAA tournament semifinals in 2019.

Just as Charlotte lured the men’s and women’s tournaments from Raleigh, Baltimore took them from Charlotte. The conference announced the change in early 2019, citing Royal Farms Arena’s presence in a walkable downtown, Baltimore’s hotel availability, at least $1.5 million in promised scholarships, and the opportunity to draw fans and alumni from northeastern states—even though 10 of the 12 member schools are in the Carolinas or Virginia and the conference moved its headquarters to Charlotte from Hampton, Virginia, in 2015. The agreement means Baltimore will host the tournament from 2021-23. 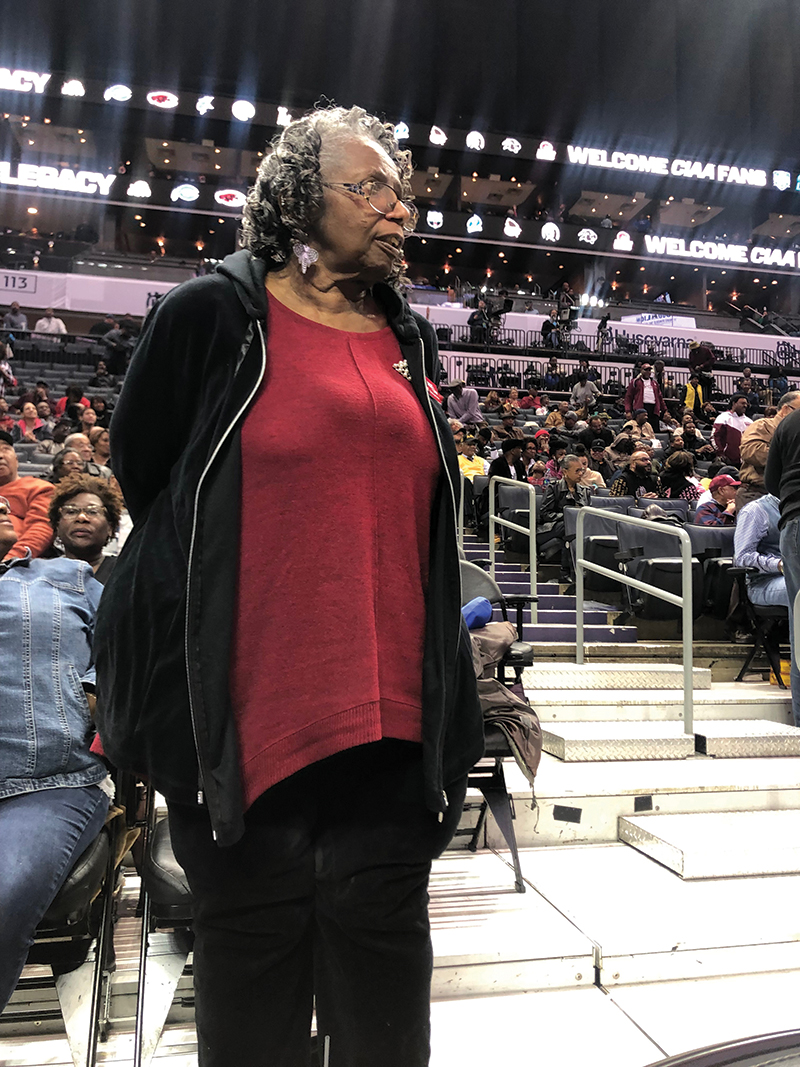 CIAA fans were asked to stand to demonstrate years of continued attendance. This fan had attended for more than 40 years.

In Charlotte, the news stung, and not only because the city and tourism officials thought they offered a walkable downtown and sufficient hotel rooms, too, for fans who attended games at the Spectrum Center. The tournament, usually held in February, has always been more than merely a sporting event. “It’s like a family reunion,” then-JCSU President Dorothy Cowser Yancy told the Observer when Charlotte landed the tournament in 2004, and the concerts, parties, and other events that surrounded it pumped about $50 million per year into the city’s economy, according to the Charlotte Regional Visitors Authority.

The city lured the Big South Conference’s men’s and women’s tournaments to Bojangles’ Coliseum for 2021-23, but it’s not expected to make nearly as much noise or money. In 2019, the CIAA tournament out-generated even the heavyweight Atlantic Coast Conference, which held its tournament in Charlotte two weeks later, according to the CRVA: The CIAA generated $43.7 million to the ACC’s $35.6 million. “If the ACC can’t out-gross the CIAA,” Graham says, “certainly the Big South’s not going to come close.” 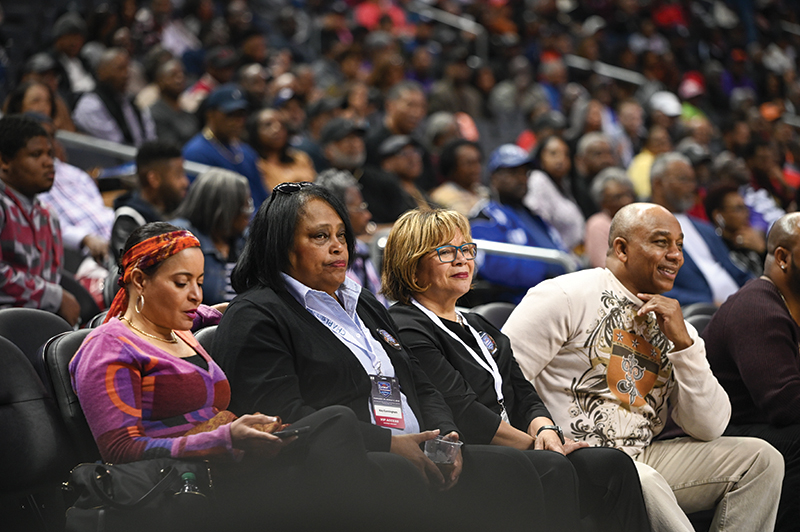 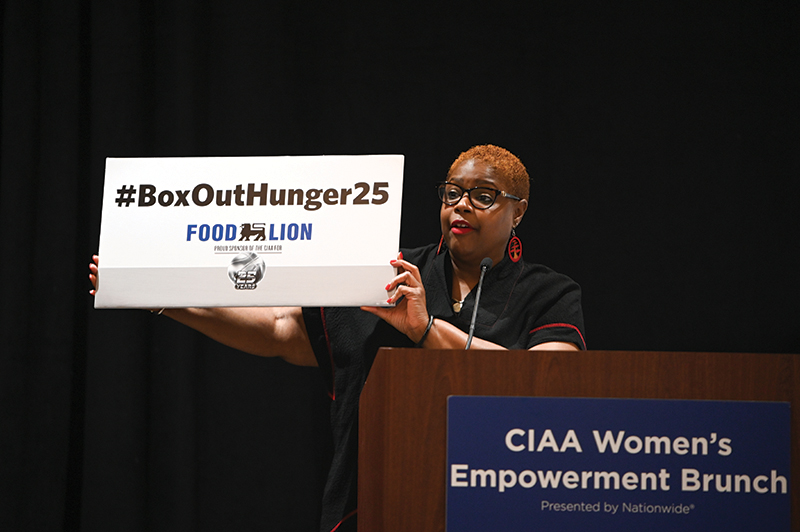 Top: The Womens’ Empowerment Brunch at the Westin Hotel highlighted the Box Out Hunger campaign. Above: Mayor Vi Lyles, second from right, sits courtside during a CIAA game.

But money tells only part of the story. In a city where black people can sometimes feel out of place in Charlotte’s shining center, the CIAA welcomed them—especially JCSU, the tournament’s host school, a university only a mile and a half from Trade and Tryon but physically cut off since the early 1970s by Interstate 77. The CIAA placed Johnson C. Smith as close to Charlotte’s heart as it’s ever been, which is a main reason Graham—who attended JCSU on a tennis scholarship and graduated in 1985—says he and some of his fellow CIAA-school alumni are talking with city officials and the Charlotte Hornets to try to bring the tournament back to Charlotte in 2024.

“That process starts now,” he says. “Like a girlfriend, sometimes you don’t realize what you had until it’s gone.” 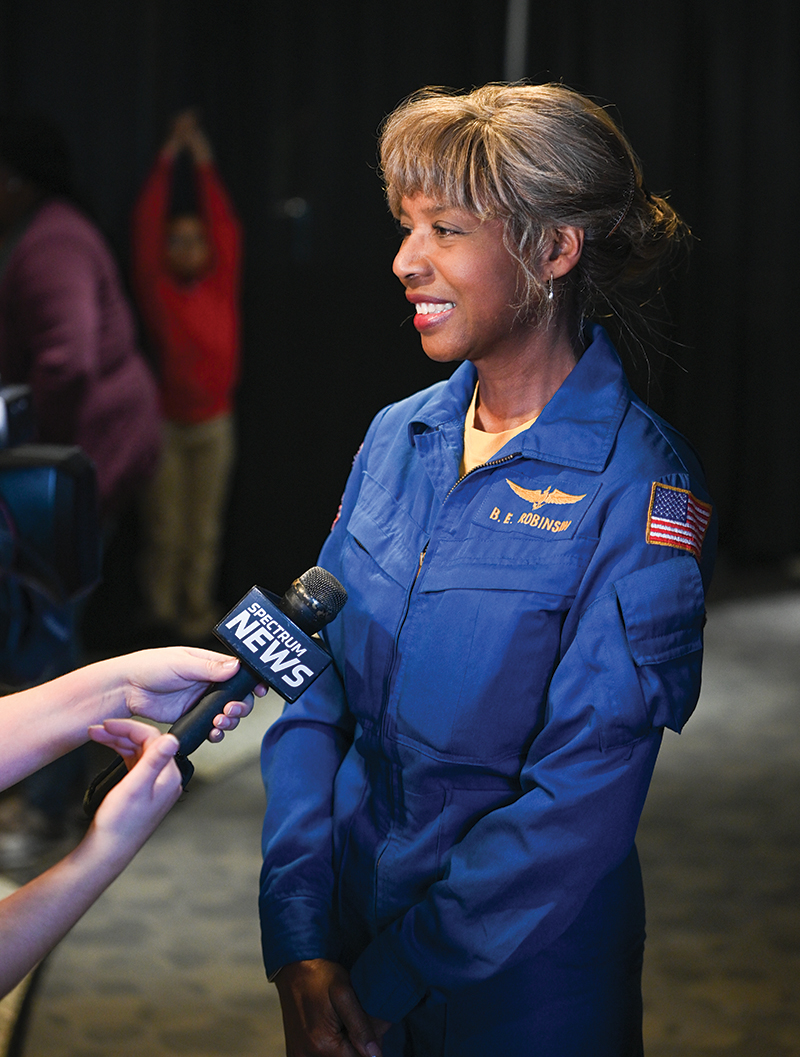