I Lost On Jeopardy!: A Charlottean On His Game Show Experience

It is a Monday morning in early 2000, and I am wearing my best suit, peering into the middle distance, and trying to ignore a jaunty piece of music written by Merv Griffin. I am playing in the Final Jeopardy round of Jeopardy!—and I don’t know the answer. (Or, if you prefer, the question.) I read the clue again: “Venetians called him ‘Il Milione,’ man of the million lies.” A politician, maybe? I riffle through the index cards of my mind: Mussolini? Machiavelli? Neither seem right.

I know I’m playing a game, but I have only 30 seconds to come up with the right answer, and at this moment, nothing has ever seemed more important.

Growing up, I was a bookworm—but I loved to miss school, because that meant a whole morning of game shows. As a kid, it seemed natural that most rewarded enthusiasm as much as intellectual ability. Many of my favorites went off the air as the years went by (R.I.P., The Joker’s Wild, with the category All Those Ologies), but Jeopardy! came back from the dead in 1984 and took over the world, like a zombie movie where the walking dead ask, “What are brains?”

Maybe it was the rigorous nature of the contest, with no gimmick beyond phrasing your answer in the form of a question. Maybe it was the unflappable presence of the late, great host Alex Trebek. Or maybe it was that damn theme music (called “Think!,” it turns out). But when I turned 30 and made a list of life goals, my top two unfulfilled dreams were visiting Australia and appearing on Jeopardy!

So on a business trip to Los Angeles, I delayed my flight home so I could try out for the show. Auditions, to my surprise, took place in the Jeopardy! studio in Culver City: We sat in the audience’s seats and were given ballpoint pens emblazoned with the show’s logo. The crowd was culled with a written test: 50 medium-hard trivia questions. If you got at least 35 right, as roughly 12 out of 100 aspirants did that day, you were invited to stick around. Everyone else? The producers encouraged them to tell their friends that they missed the cutoff by exactly one question.

Those of us who stayed behind played a few sample rounds of trivia, but the producers didn’t care who won: They were judging us on camera-readiness and our ability to follow instructions. I decided that my competition, mostly men, fell into three categories. Some were definitely out: The guy who showed up in denim cutoff shorts and kept mumbling into his shoulder was treated politely but wasn’t going to end up on national TV. The two beautiful, confident brunette women, however, were definitely in. I pegged myself toward the top of the middle group: I had a good shot but not a guarantee. The producers sent us home with our ballpoint pens and told us that if we didn’t hear from them in 12 months, we could audition again.

For the next year, I videotaped every episode of Jeopardy!, then watched it with a remote control and “buzzed in” by hitting the pause button. I learned about the gaps in my knowledge (geography, Canadian history) and tried to fill them in with a spackle of facts and flash cards. But as week after week passed, I assumed I hadn’t made the cut. After 11 months, on the day after I got home from vacation (Australia!), I got a call inviting me to return to Culver City to be a Jeopardy! contestant.

I bought a plane ticket and reserved a hotel room—the show didn’t pay expenses—and, a few weeks later, showed up at the Sony studios with four changes of clothes. That was an optimistic wardrobe, brought just in case I was a five-time champion. Based on my practice at home, I figured I had a better-than-even chance of winning, but I knew I could get unlucky with the categories or get smoked by a superstar trivia maven.

Jeopardy! taped every two weeks: five episodes on Monday before an audience of out-of-towners, then five episodes on Tuesday for the Californians. Backstage, the contestants milled awkwardly and made small talk about past champions and Babe the Blue Ox. Everyone snapped to attention when the producers picked the first two challengers of the day. I was one of them—I swigged an early-morning Diet Coke and went onstage.

My opponents: Bobby, a friendly ER doctor, and the returning champion, Gregg, a bearded paralegal. The first clue, in the 1860s category: “In March 1867, Secretary of State Seward arranged to buy this ‘icebox’ for a total of $7.2 million.” I buzzed in and confidently asked, “What is Alaska?”—and got a “yes!” from Alex that felt like a fireworks show in my brain.

Like most people, I could read the clues in less time than Alex Trebek would take to say them aloud. So my routine was to read the clue to myself, take a moment to formulate the answer, and then tune back in to Alex’s voice just as he finished—which was when a (literal) lightbulb went on and we were allowed to buzz in. If I buzzed in early, I’d be locked out for 0.4 seconds, a geological era in this setting.

All three contestants in a Jeopardy! match are smart, or at least facile with trivia, and the show likes to make them look even smarter. For example, I got a $500 clue in the U.S.A. category: “At 306 feet high, the Bennington Battle Monument in this state was once the tallest battle monument in the world.” Answering it correctly gave me the veneer of expertise in battle monument trivia, but it meant only that I had a high school friend who went to Bennington College in Vermont.

The secret of the game: It comes down to hand-eye coordination. When all three contestants know the answer, as they often do, the winner is the one who has the quick-draw rhythm. If you’ve ever seen a contestant frantically hammering on the buzzer like a junkie with a morphine drip, it’s not that their buzzer’s busted—they’re just a few frustrating microseconds behind the pace. 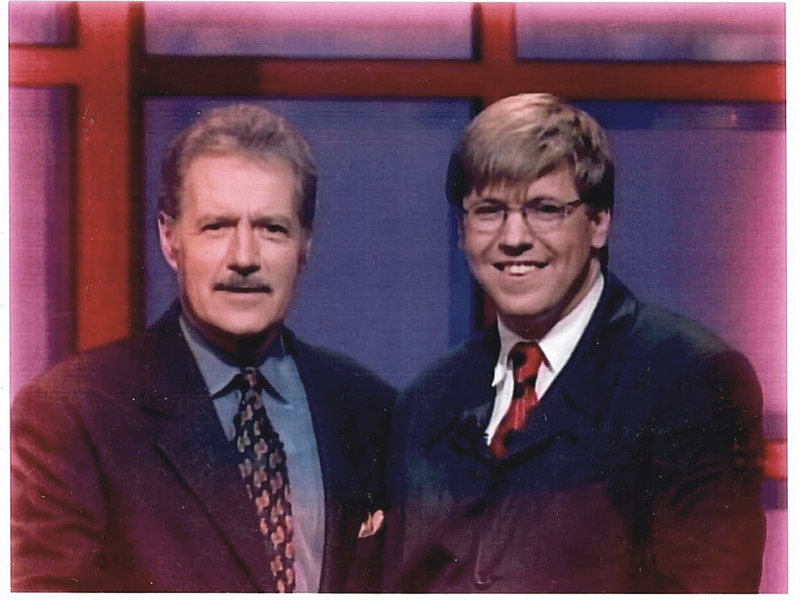 Gregg, it turned out, was a monster on the buzzer. I scored with “What is broccoli?” and “What’s a dipstick?,” but he steadily pulled away. (Not that I had time to panic—everything was flying by incredibly quickly.) In the second round, Double Jeopardy, I chewed up the Grammys category, scoring big money with clues about Tejano and spoken-word albums, and I even landed on a Daily Double: “Burning Spear won for best album in this musical category with ‘Calling Rastafari.’” I overthought it and almost blurted out “What is ‘Best Reggae Album by a Solo Artist’?” before realizing I could just say, “What is reggae?”

I had $5,500, only $1,600 behind Gregg—but then he grabbed control of the board and ran away with the match. When the round ended a few minutes later, he had $15,300, I still had $5,500, and Bobby had $1,100. Before Final Jeopardy, announcer Johnny Gilbert revealed the prizes for the runners-up: second place received a trip to France, while third place got a pair of bicycles. Bobby turned to me and said, “Hey, you’re going to France!” Barring insane wagers, our placement was locked in, and somehow that made it feel essential for me to leave the stage with a correct answer. When Alex read the clue in the Historic People category, my plan to save face, however, ran up against Il Milione.

“Why Venice?” I wondered. Then, in a game that rewarded knowledge that ran an inch deep but a mile wide, I had a genuine moment of mental synthesis. I remembered that Marco Polo had died in a Venetian debtor’s prison because, when the explorer returned from China with tales of the Far East, many people thought he had made it all up. “Who is Marco Polo?” was correct, it turned out—so I stood a little taller when we gathered with Alex while the credits rolled and made small talk for the cameras. (His chosen topic: the Lakers.)

My episode aired a few months later. I had friends over, even though I knew it wouldn’t end with champagne. Coming in second is a weird thing to brag about, and any impulse I might have had to do so was vitiated when I got to know Ken Jennings, 74-time Jeopardy! champion. (He contributed an illustration to a book I edited, The Beautiful Book of Exquisite Corpses.) No matter how accomplished you are, there’s always someone who did better. (Unless you’re Ken Jennings, I guess.)

When I got home from my prize trip to Paris, something happened that I didn’t expect: I stopped watching Jeopardy! I was genuinely happy for Gregg, who seemed like a good dude; the prize money was life-changing for him because it paid for graduate school. I didn’t feel bitter—except when I watched a Jeopardy! episode that I felt I could have won. So I found other ways to get my trivia fix: I permanently altered the balance of power in my in-laws’ marathon men-versus-women Trivial Pursuit games.

I had the memory of my adventure, I had the ballpoint pen, and I had a go-to karaoke song, to the tune of Greg Kihn’s “Jeopardy,” but with “Weird Al” Yankovic’s lyrics: “I was there to match my intellect on national TV,” I would belt out. “I lost on Jeopardy, baby.” If I didn’t have the intellectual ability on that Monday morning in 2000, at least I had the enthusiasm. In my life, that turned out to be enough.

Gavin Edwards is the author of 12 books, most recently Kindness and Wonder: Why Mister Rogers Matters Now More Than Ever. He lives in Charlotte.