Jim Wrinn, as he often told people, was a lucky man. He spent the last 17 years of his life in the job—the only one of its kind—that he’d dreamed of since childhood. He didn’t just want to be a journalist. He didn’t just want to write about trains, a lifelong passion. He specifically wanted to be editor of Trains magazine, a Wisconsin-based monthly publication for train enthusiasts since 1940. That’s what Jim, at 18, told his first academic adviser at UNC Chapel Hill in 1979. Twenty-five years later, he left The Charlotte Observer to take the engineer’s chair at Trains. 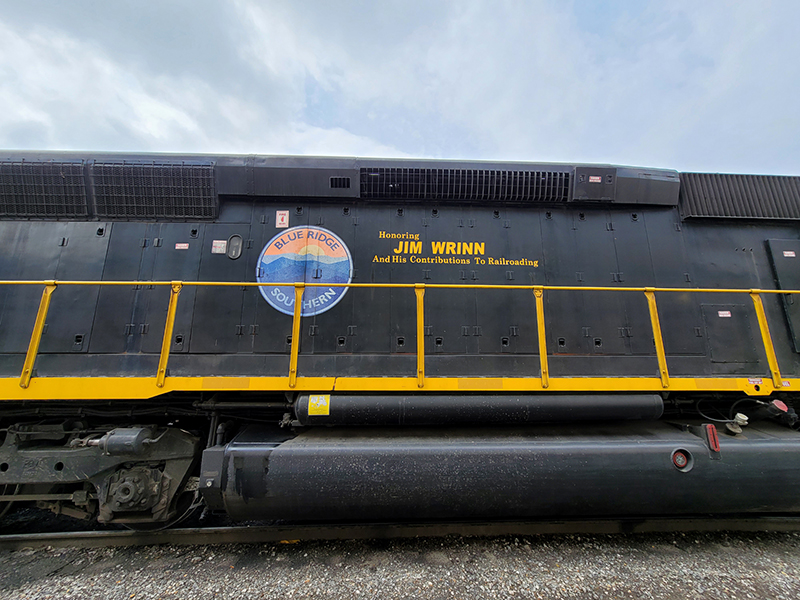 The Blue Ridge Southern Railroad has dedicated its Engine 4204 (above, in Canton) to the memory of Jim Wrinn. Courtesy, Terry Seaks.

His new home was up north. But Jim was a Tar Heel born and bred, a Franklin native who worked at newspapers in Gastonia and Fayetteville before the Observer hired him in 1986. He spent most of his 18-year Observer career in regional bureaus, primarily in Statesville but also in Hickory, where he and I sat back to back for a few years. Jim was good-natured and unflappable, necessities (and rarities) in a newspaper bureau, and I was both sorry he had to go and happy about why.

Jim still held his dream job when he died in March, at 61, after a 14-month battle with pancreatic cancer. The condolences from friends and colleagues paid tribute to his professionalism, his love of railroading and the history it traced, and something even more fundamental. “No one could make friends like Jim,” Jackson McQuigg, a vice president at Atlanta History Center and a longtime friend, told Trains. The run was too short, but I’m glad he was one of mine.  —Greg Lacour