Inizio Pizza Napoletana: One Man's Search for the Perfect Dough

Grant Arons’ obsession pays off in the crust 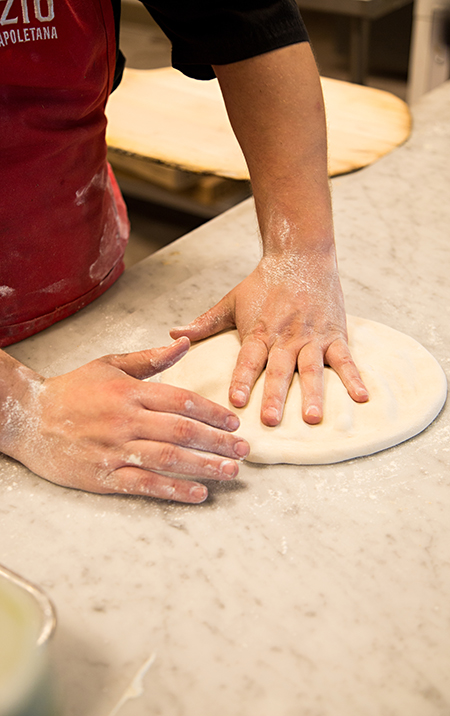 The pizza crust at Inizio is made with flour and water that are imported from Italy. Neapolitan pizza crust is thin and soft, not crunchy like the pies at American pizzerias.

GRANT ARONS' FRIENDS knew he was a little obsessed with pizza, but when he started talking about crumb structure and calcium content and double-zero flour, they thought he was crazy.

We’re sitting at a dark, wooden farmhouse table inside Inizio Pizza Napoletana, Arons’ Neapolitan-style pizzeria off Providence Road in south Charlotte, between the lunch and dinner shifts on a hot July Thursday. In the open kitchen behind me, two domed pizza ovens burn oak logs at 1,000 degrees. A woman in chef’s whites kneads balls of dough in a climate-controlled glass room.

Arons, whose mother’s family is from outside of Naples, Italy, began his search for the perfect Neapolitan pizza dough five years ago. He installed a wood-fired oven in his backyard and started testing recipes by making small tweaks in the ingredients and process. “The whole point of making a good dough is developing texture and flavor,” Arons says. “How much water you put in, that is going to make a huge difference. How much time it rests can make a tremendous difference. Even the humidity in the air matters.”

He tried roughly a dozen different types of flour before landing on Polselli, milled in a village on a hilltop in south-central Italy. “It holds less water and has a very different feel,” he explains. “It’s ideal to be cooked in a very short time. It’s different from an American, high-protein flour that you would use for a New York style.” 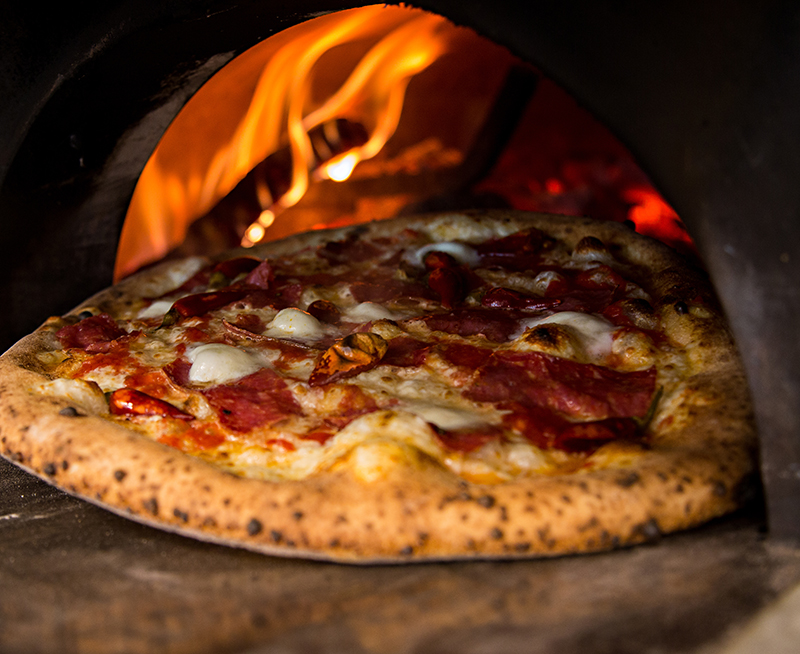 A diavola pizza cooks inside a Mario Acunto pizza oven from Italy, which can reach 1,000 degrees and bakes pizzas in 90 seconds. 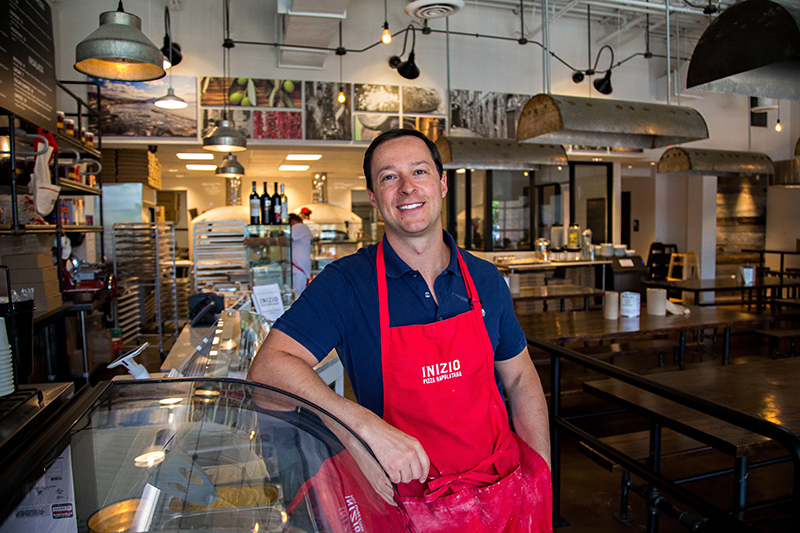 At Inizio, the flour is mixed with Italian bottled water—“It has the perfect calcium content,” Arons says—and the dough rests for three days before it’s ready. We’ve moved from the dining room into the kitchen and are standing next to two Mario Acunto pizza ovens, huge, beige domes made from the volcanic soil of Mt. Vesuvius. They can cook a pizza in 90 seconds. 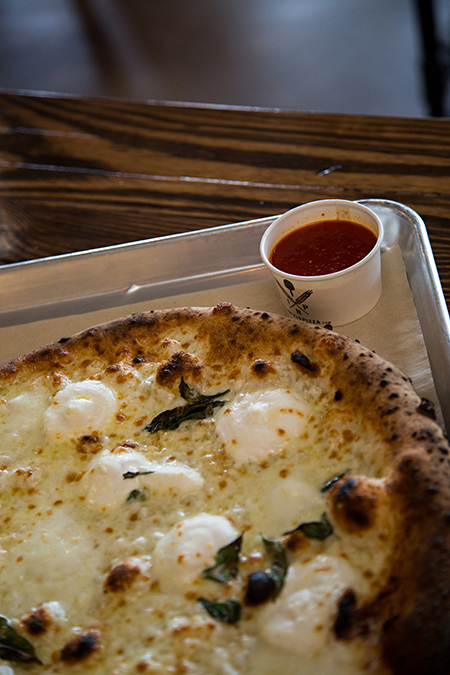 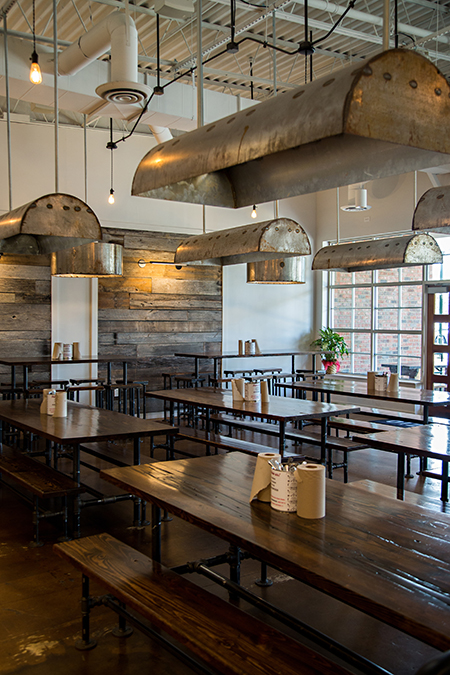 Top: The bianca pizza is topped with buffalo mozzarella. Bottom: Inizio’s dining room is inspired by restaurants in Italy, where guests sit close together to enjoy their food.

Arons stretches and pulls the ball of dough into a large, 16-inch circle—a process called opening the dough. He scatters a handful of mozzarella cheese and spoons bright red sauce, made from imported San Marzano tomatoes, across the surface. Then comes buffalo mozzarella, also brought in from Italy, plus fresh basil, garlic, and a drizzle of imported Italian extra virgin olive oil. He’s making the margherita pizza, Inizio’s most popular. Since the restaurant opened in March, Arons and his staff have had to educate customers about the differences between Neapolitan-style pizza and American-style pies. “They go, ‘My pizza isn’t crunchy and stiff and that’s what makes a good pizza,’ ” he says of some visitors. “This style would never be crunchy and stiff. It’s meant to be soft and elastic, because in Naples, they fold their pizza and walk down the street with it, or eat it with a fork and knife.”

He takes a long, metal rod and sticks it in the oven, rotating the pizza, looking for the dark spots on the crust known as “leoparding.” A minute and a half after he slid the raw dough inside, Arons pulls the pizza from the oven. He sprinkles a handful of grated pecorino cheese over the bubbling surface and then sets the pizza on a shiny, metal sheet tray.

When we get back to the table, Arons shows me his pizza-eating ritual, and I start to understand why his friends tease him about his dough obsession. He pulls off a chunk of the crust, makes sure it’s free of sauce and cheese, and splits it in half, lengthwise. He holds it up, looking at the inside, the air pockets, the “crumb structure.” He brings it up to his nose and inhales deeply. “It has that fresh bread, yeasty, soft pretzel kind of smell,” he says. Then, perhaps realizing the absurdity of the scene, he chuckles. “It looks like I’m trying to get high off of pizza dough.”

Finally, he takes a bite and I feel like I have permission to dig in, too. The dough is chewier than the pizza I’m accustomed to, but it has a personality. It’s not just a vehicle for sauce and cheese, but rather a part of the dish. “It’s amazing how such few ingredients have so many variables,” Arons says.

As I reach for another slice, I offer one to Arons, but he shakes his head no.

“No,” Arons replies. “I’m headed up to New York to visit pizzerias. And when I travel for pizza”—he says this like others might talk about traveling for art or wine—“four pizzerias in one day is totally normal.”

The Dough Nerd rubs his palms together, anticipating his chewy reward.

Adam Rhew is associate editor of this magazine. Reach him by email, adam.rhew@charlottemagazine.com, or on Twitter: @AdamRhew. 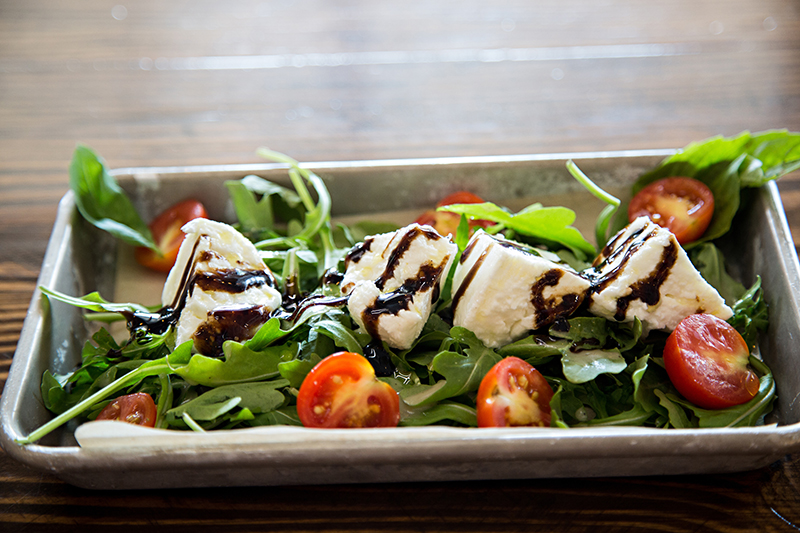 Italian mozzarella sits on top of the caprese salad.

This article appears in the September 2016 issue of Charlotte magazine.
Categories: Food + Drink