Inside 3 of Charlotte’s ‘10-Minute Neighborhoods’

It’s one of the signature goals of the city’s new comprehensive plan, and these neighborhoods already meet some of the criteria

The document that lays out a vision for Charlotte over the next two decades establishes this as its top community goal: “All Charlotte households will have access to essential amenities, goods, and services within a comfortable, tree-shaded 10-minute walk, bike, or transit trip by 2040.” The planners who devised the goal use this shorthand term for those clusters of households, amenities, goods, services, and trees: “10-minute neighborhoods.”

They’re scarce in Charlotte, as they are in most American cities. You might find some in Boston, New York, or other northeastern cities that developed decades before the primacy of the car, the parking lot, and the multilane, limited-access highway. But here and elsewhere in the Southeast, you have to look hard to find any that meet the 10-minute-neighborhood standard, based on convenient access to things like grocery stores, pharmacies, banks, parks, and public transit.

Some Charlotte neighborhoods come closer than others, though. We’ve identified six in Charlotte that already lean toward the 2040 plan’s vision. We’ll take a close look at three right now and three in the October issue. Keep in mind that we’re not saying these are ideal neighborhoods, or the most affluent, or that these are somehow “better” than others. They’re just examples of what may lie ahead for Charlotte—a city of distinct communities whose residents don’t necessarily have to take the car to get what they need. 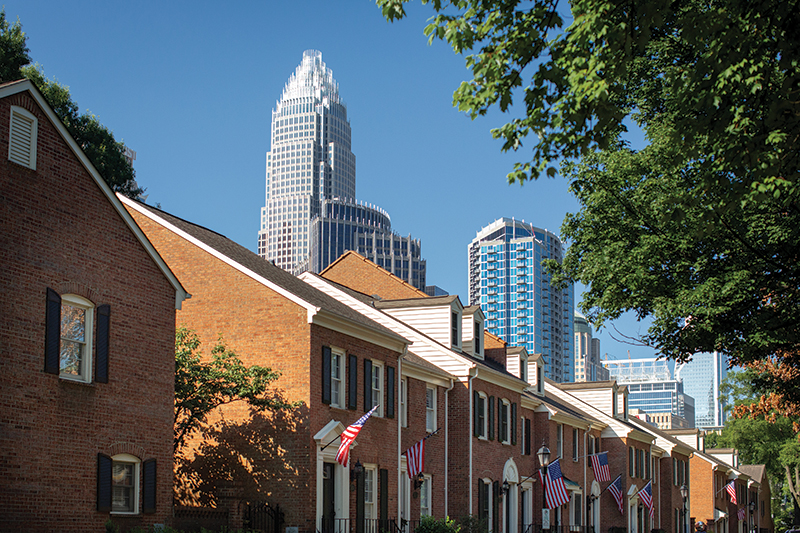 Where is it? It’s uptown’s northernmost and most residential quarter, bounded by North Tryon and West Trade streets and Interstates 77 and 277.

Grocery store access: 98% of housing units are within a half-mile of a full-service, chain grocery store (here, it’s the Harris Teeter at 325 W. Sixth St.).

Pharmacies: 99% within a half-mile. There’s a CVS at West Sixth and North Graham streets.

Parks: 100% within a half-mile of a park. Fourth Ward Park is small, and Ninth Street Park even smaller, but they’re still two public parks in a compact neighborhood.

Transit: 100% within a half-mile of a transit stop, and the Transit Center, Seventh Street, and Ninth Street light rail stations are within easy walking distance.

Banks: 72% within a half-mile of a bank or credit union.

Bike-friendliness: 1.7 on a zero-to-three scale that measures the transportation network’s ability to
support cycling.

Upshot: As close to a true 10-minute neighborhood as you’ll find in Charlotte. 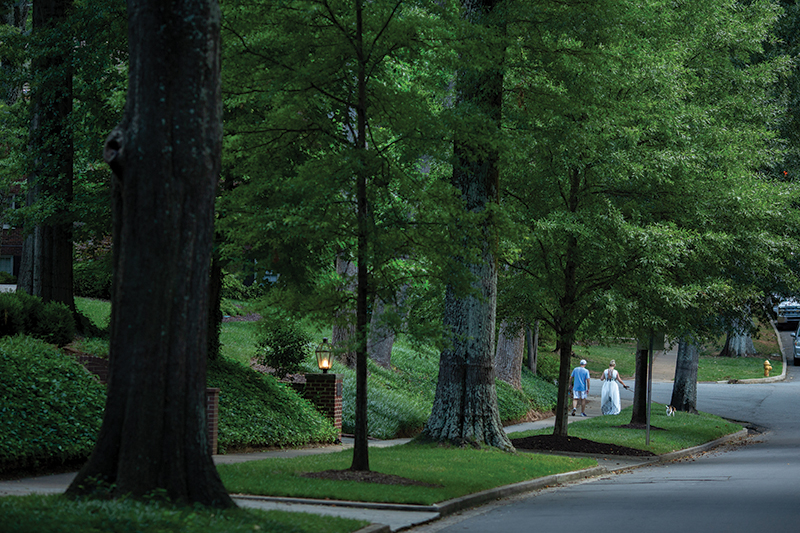 As different as the neighborhoods are, residents of both Lincoln Heights (above) and Eastover (below) have good access to buses, banks, groceries, and other assets. Photo by Logan Cyrus.

Where is it? A couple of miles southeast of uptown. Providence Road is its western edge, Briar Creek its eastern, and Randolph Road and South Laurel Avenue cap it.

Grocery store access: 53% of housing units are within a half-mile of a grocery store. The Harris Teeter at Providence and Queens roads is the closest.

Parks: 88% within a half-mile. Randolph Road Park isn’t in the neighborhood, but it’s close enough to walk.

Transit: 100% within a half-mile of a transit stop.

Banks: 75% within a half-mile of a bank or credit union.

Bike-friendliness: 1.8 on the scale.

Upshot: It doesn’t fit the ideal as well as Fourth Ward—few neighborhoods could—but Eastover benefits from close proximity to uptown and the more affluent Myers Park and Elizabeth neighborhoods, and its quiet streets encourage walking. 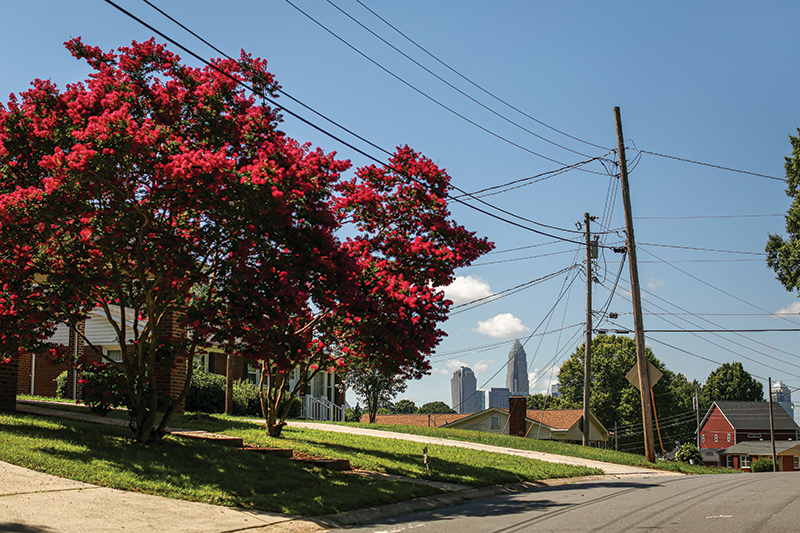 Where is it? It’s wedged into the southwestern corner of the I-77/85 interchange, with Beatties Ford Road as its western boundary and Russell Avenue its southern.

Grocery store access: 66% of housing units are within a half-mile of a grocery store. There’s a Food Lion at 2123 Beatties Ford Road and a Family Dollar across the street.

Pharmacies: 66% within a half-mile.

Parks: 100% within a half-mile. Lincoln Heights Neighborhood Park sits on Catherine Simmons Avenue, smack in the middle of the neighborhood, and L.C. Coleman Neighborhood Park, behind Northwest School of the Arts, is an easy walk away.

Transit: 100% within a half-mile of a transit stop. Three main bus lines—the 7 on Beatties Ford, the 3 on LaSalle Street, and the 26 on Newland Road and Mulberry Avenue—run through various parts of Lincoln Heights.

Banks: 65% within a half-mile of a bank or credit union. A Bank of America branch is next to the Food Lion on Beatties Ford.

Bike-friendliness: 1.6 on the scale.

Upshot: Lincoln Heights residents suffered for years—former Mayor and U.S. Transportation Secretary Anthony Foxx grew up there, and he’s said that, as a teenager in the 1980s, he couldn’t get a pizza delivered to his home. But the collection of shops, markets, and community services (including a public library branch) that’s grown up around West Charlotte High School means most residents have quick and easy access to what they need.

GREG LACOUR is senior editor for this magazine.