Inside the Family-Operated Carolina Craft Butchery in Davidson 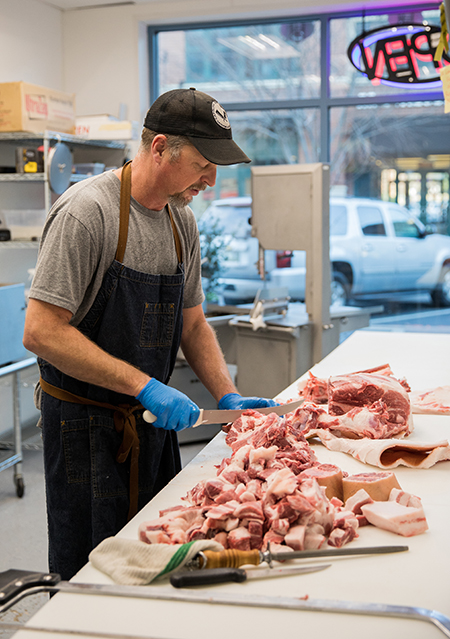 FROM THE SIDEWALK on Jetton Street in Davidson, a large glass window at Carolina Craft Butchery reveals the inside of its cut room. Bright ceiling lights bounce off the sheet-white walls and glimmer in the blade of a long, slender knife resting on a butcher table.

“We want people to understand these aren’t just pork chops that roll in on the back of a truck, loaded into the case. There’s a whole hog lying on the table,” says Lee Menius, who owns Carolina Craft Butchery. He’s wearing a navy hooded sweatshirt with the sleeves pushed up to his elbows, his gray hair covered by a baseball cap.

Menius grew up making hay and chopping firewood, among other things, at Wild Turkey Farms in China Grove, which has been in his family since the Civil War. In 2002, he and his wife wanted to try to use the land to raise more than beef cows, as Menius’ grandfather had done. The couple began raising pigs, chickens, lambs, and rabbits, and in 2008, they started selling their pasture-raised meat at local farmers’ markets.

Saturday morning markets were a commercial outlet for Menius, but regulations required him to outsource the cutting and packaging of his meat, which was returned to him frozen. Carolina Craft Butchery was a chance for Menius to return to the traditional farming responsibilities he learned in his youth, giving him the freedom to make special cuts, smoke his sausages, and sell fresh, non-frozen products.

The butchery’s front door leads to a retail room, adjacent to the cut room visible from the street. It maintains a down-home country store feel thanks to the cheerful yellow walls, chalkboard butcher charts, and antique meat cleavers hung like picture frames along the walls. Jars of burnt-orange barbecue sauce and dark purple jelly line a black case. A roll of brown butcher paper is mounted on the wall; on the tail end, Menius has drawn a pig from the rear and written, “We like pig butts and we cannot lie!!!” 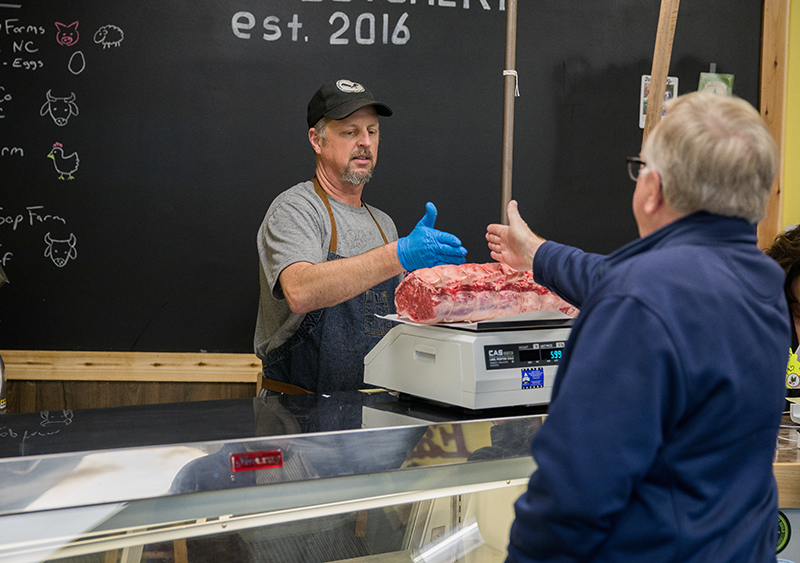 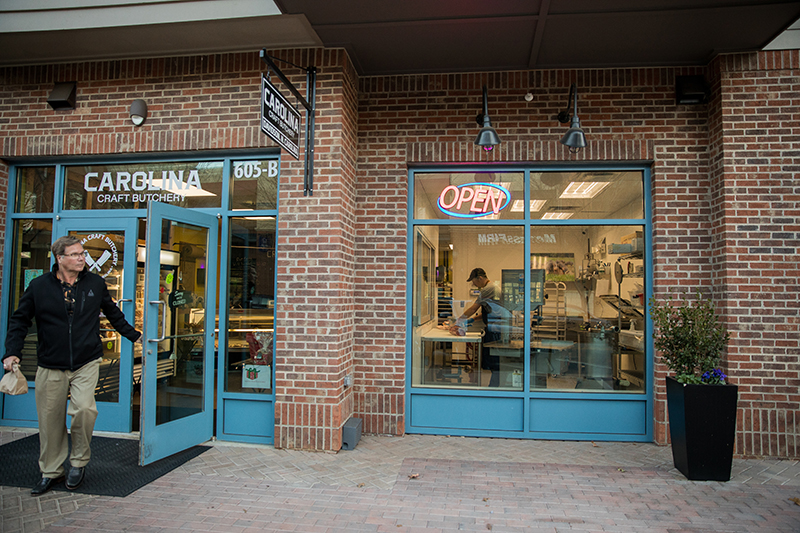 The butcher shop breaks down whole animals in house, and customers can watch the staff at work.

The room is startlingly cold. Along the left wall, a large freezer stocked with air-sealed packs of frozen meat and poultry sits next to an equally large refrigerator full of local spreads and cage-free eggs. At the front of the store is a refrigerated display case offering the day’s fresh cuts marked by loopy, hand-written labels.

All of the meat is sourced from local farmers Menius knows personally. The grass-fed red meat comes from Rogers Cattle Company and Hickory Nut Gap Farm, and the free-range chicken comes from Sharon Hill Farm. Wild Turkey Farms provides the pasture-raised Berkshire pork. “I like to think that what we’re able to do here is support our farm, but also be an outlet for other small farms,” Menius says. 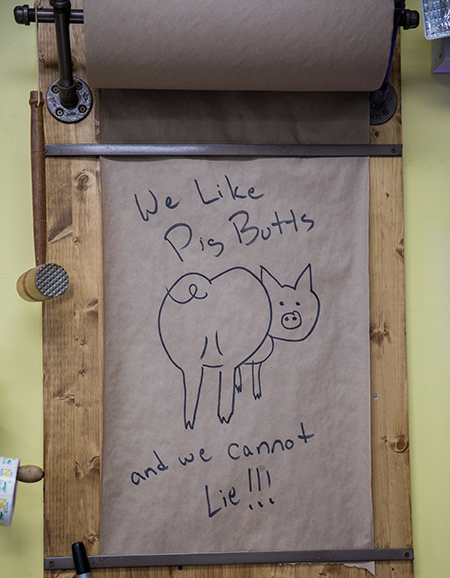 Separating the retail and cut rooms is a custom, four-foot-by-10-foot sliding glass window that Menius designed. “We want people to walk in and feel like they’re a part of what’s happening,” he says. Customers can slide the window open and tell the butcher, knife in hand, the exact cut they want. They can watch pork become sausage in full view, witnessing the food chain in real time.

The experience here is different than at the in-store butcher shop at the Harris Teeter 500 feet away. Carolina Craft Butchery only cuts up one to three cows a month. For every pig the butchers cut—which may only be two or three a week—they get two tenderloins. Quantity and selection are limited, because, as Menius explains, “We’re focused on raising animals that produce really good meat quality. We’re focusing on the flavor and the texture and the eating experience.”

When Menius offloads a whole hog onto his cutting table, he has to be innovative with his craft. Butchery requires more than just piercing red muscles with a sharp knife. “I need to sell every piece of that pig to, on the one hand, honor that pig because you don’t want it to go to waste, and at the same time ensure people have a good experience, while also making money at it,” he says.

Menius spent years networking with chefs, learning how to prepare every type of cut so that if a customer asked him how to cook pork shank, he’d have an answer: “Braise it, put it in the crockpot with some white wine, salt, pepper, garlic, and fresh thyme.” If he’s out of tenderloin, he can confidently offer a boneless loin, which is similar—not quite as tender, but less expensive. “If I can tell you how to cook something that works, then you do it, you like it, you come back,” Menius offers. “If you don’t like the recipe, maybe you come back anyways.”

Menius’ wife, Domisty, keeps a full-time job to help support the family in addition to working at the butchery. Their sons, Rosty, 14, and Charlie, 11, are often at the shop on weekends, casing sausage. Hard-working families like the Meniuses are the makeup of local agriculture, and as Lee talks, he unveils the domino effect his customers’ dollars have on local farmers, feed producers, food processors, and distributors.

“Your dollars? They’re not going to stockholders on Wall Street,” he says, the volume of his voice raising slightly. “They’re going back to put Charlie and Rosty through college.”

ANNA VAN ERVEN is a writer and transplant from up north who loves living down south. Email her at annavanerven@gmail.com.

This article appears in the February 2018 issue of Charlotte magazine.
Categories: Food + Drink, In Print
Contest of the Month