Not long after I moved to Charlotte, in the summer of 1989, I was crossing Church Street with a coworker who grew up in New York City. Just as we jaywalked out into the street, a car whipped around the corner. The driver had to slam on the brakes to keep from hitting us. He waved in apology. I waved back.
My New York friend sneered and said, in a tone of pure contempt: Pssh. Charlotte. 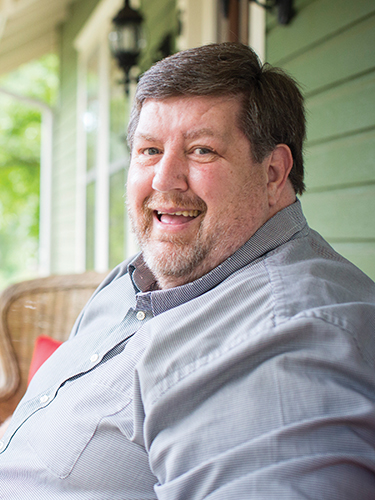 Former Charlotte Observer columnist Tommy Tomlinson lives in Plaza Midwood, where he continues to write and enjoy one of Charlotte’s best front-porch neighborhoods.

To him, a driver in a real city should flip off a couple of jaywalkers—or just mash them into the asphalt. A pedestrian who almost got run over ought to cuss the driver a new colon. There’s no damn way anybody involved should wave.

To me, though, it made perfect sense.

I grew up in Georgia, and except for one year in Boston, Charlotte is the farthest north I’ve ever lived. I grew up on a coastal island and spent a few years in a town with one stoplight. I lived in Atlanta twice and Jacksonville once. I’ve been everywhere, man. But I’ve spent the past 25 years in Charlotte, and I’ve often thought of that little scene on Church Street as a symbol of this city. Charlotte moves so fast it can run right over you. But it will wave as it leaves you by the side of the road.
The first part is what makes Charlotte a city. The second part is what makes it a Southern city.

Yes, I know—you can make a strong case that Charlotte is about as Southern as Newark. Inside the city limits, it’s easier to find good barbacoa than good barbecue. The only mill left is Concord Mills, and that’s a mall. On Sundays the sports bars set aside TVs for the Bills and Steelers and Packers. Not long ago, the data analysis site fivethirtyeight.com surveyed America’s classic-rock stations to see which artists got played the most in which towns. So Charlotte went heavy on Skynyrd and the Allmans, right? Nope. KISS and Pink Floyd.

I hope y’all will let me say in rebuttal that Price’s Chicken Coop serves the best fried bird on the planet, that we have museums honoring both NASCAR and Billy Graham, and that we are not just below the Mason-Dixon Line, but also below the Sweet Tea Line and the Fixin’ To Line. (My wife, who grew up in Wisconsin, now says “fixin’ to” on a regular basis. We are getting close to her busting out a “might could.”)

Point is, this is a complicated place. But Souther­ners are used to complications. We have always been knotted up in what Patterson Hood of the great band Drive-By Truckers calls “the duality of the Southern thing.” Those of us who grew up Southern swell with pride at the goodness of the South—our sense of community, our friendly nature, our unmatched food and music. At the same time, we steep in shame or anger about the South’s history of racial terror and poverty, and the way our past keeps looping back into the present. Just when we’ve almost forgotten it, it starts to ache again, like a broken bone that never healed right.

The bigger truth, though, is that the Southern thing is more than a duality. The South is and always has been about multiple realities, all happening at once. This issue asks the question: Are we Southern? But to me, there’s a more subtle question: What kind of Southern are we?

“There’s always been different Souths,” Tracy Thompson, author of the 2013 book The New Mind of the South, tells me. “Some people think of the South as Dixie Carter and people sipping ice tea on front porches. Nobody builds front porches anymore. They’re all out back on the deck.”

Thompson’s book is a riff of sorts on W.J. Cash’s original The Mind of the South, which came out to wide acclaim in 1941. Cash, who had worked for The Charlotte Observer and Charlotte News, tore open the old wounds of the Civil War, centering on what he called the “savage ideal”—the white South’s desire to preserve its violent past. (He may have torn open his own wounds, too. Just five months after the book came out, Cash—delusional and believing that Nazi spies were trying to kill him—hanged himself in a Mexico City hotel room.)

But Cash didn’t see the different versions of the South springing up everywhere. Some parts of the South worried over the family silver. Other parts kept a shotgun leaned up behind the door. Some places thrived on fertile soil, and others on what they hid deep in the woods. Charlotte was like none of those places. We rose up from the crossroads of two Native American trading paths. From the start, this chunk of the South has been about business. (Or, if you care to say it with an accent, bidness.)

Thompson thinks a Southern touchstone is the emphasis on family—not just the people in your house but an extended family of kinfolk and friends and neighbors.

They’re the people you invite for a Sunday potluck, or get with to watch a ballgame, or gather up to visit somebody who’s sick. It fits in with why people think the South is more eccentric than other places—I call it the Crazy Aunt Theory. In other parts of the country, they stick their crazy aunts in the attic. But down here it’s too hot to do that, so we put our crazy aunts right out on the porch and drag them to Golden Corral or wherever. Charlotte’s all-time champion eccentric, Hugh McManaway, wasn’t stuck in a back room somewhere. He was out there at Providence and Providence and Queens and Queens, directing traffic. And after he died we built a statue of him.

A lot of the structure of the Old South has survived here, despite our habit of tearing down old buildings. We’re known as a churchy place, which is not always a good thing. For years, when people connected Charlotte and religion, they thought not of Billy Graham but of Jim Bakker. (Not long after I got to town, a judge briefly suspended Bakker’s fraud trial in federal court after Bakker freaked out and buried his head under his lawyer’s couch.) In general, we do seem a bit more filled with the spirit than other places—“Where do you go to church?” is a question you might get asked now and then. Having said that: Our bars fill up on Sundays, too.

Part of what makes our city complicated is that most everyone’s from somewhere else. For decades we’ve had people from Buffalo and Cleveland coming down here for jobs and warm weather. Now we have people from Honduras and Bosnia and the Sudan coming here for … well, jobs, but also for safety and freedom. It’s hard everywhere for immigrants, legal or otherwise. But Charlotte is not one of those leather bound Southern towns where you have to have the right last name to make it.

We’re built for newcomers, because that’s the fastest way to grow.

And growth is what we’ve always wanted most. We got a bug in our butt when George Washington called us “a trifling place” 200-some years ago, and we’re ticked off that people think of Atlanta first, and we’ve always pushed and strived to get people to pay attention to us. That’s its own sort of Southern heritage—the old Scots-Irish impulse to fight your way to the front of the line. Now we have an NFL team and an NBA team. We have one of the biggest banks on earth. We had the Democratic National Convention. We’re a 6-foot city, but we keep scrapping like we’re 5-foot-3. Who’s the most popular athlete in Charlotte history? Muggsy Bogues.

People here didn’t come from much—this was a town of millworkers and shopkeepers and farmers who moved to the city. The Old South was a fine place to be for a few rich white men. Everybody else had to work for what they got. That memory is embedded in Charlotte, and it’s there every time we pave a new highway or build a new office tower. We’re never satisfied.

I talked about all this one time with Dorothy Counts-Scoggins, one of the most important people in Charlotte history. She was the first black student at Harding High School in 1957. On her first day, she walked down the hill to school and the white kids screamed at her and spit on her. She kept her head high, and photos of her went out around the world. The abuse didn’t stop after that first day, though, and her parents soon pulled her out. She finished high school in Philadelphia and Asheville and later lived in New York. But eventually, she returned to Charlotte, and she still lives here now. I asked why she came back to the place that hurt her.

Well, it wasn’t everybody, she said. Plus, it’s been good to watch Charlotte change. It gets better here all the time. It’s a good place to have a family. A good place to call home.

The joke about Charlotte is that it flips the old saying: It’s a great place to live, but you wouldn’t want to visit. We’re not a great tourist town and probably never will be. But if you stick around a little, you’ll get to watch Charlotte change—not always for the better, but mostly.

I spent some time recently trying to figure out the most Southern moment in Charlotte history. It might have been the moment in 1865 when Jefferson Davis, president of the Confederacy, was standing on South Tryon Street when he found out that President Lincoln had been killed. It might have been that time in April 1972 at the old Charlotte Coliseum (now Bojangles’ Coliseum), when Billy Graham held a five-day crusade, followed four days later by Elvis. In the end, I settled on the Great American Bash wrestling show at Memorial Stadium in 1985, when David Allan Coe opened with an hourlong concert and Dusty Rhodes closed the show by piledriving Tully Blanchard in a steel cage match and winning 30 days’ possession of Tully’s valet, Baby Doll.

That was a hell of a Southern thing. But you know what? As I write this story in mid-July, we’re a couple of weeks away from Liverpool and AC Milan playing soccer at Bank of America Stadium. That’s not the South most of us have in our heads, and it sure ain’t the Old South some people long for, but it’s the South just the same. Charlotte has bent the South to fit the city’s needs, instead of the other way around.

People who come through the Charlotte airport always notice those white rocking chairs—classic symbols of the South. But the part to remember is, they’re at the airport. Nobody stays in them long. Charlotte is a city that won’t sit still. There will always be a strain of Southerners who look back at their fantasy of the South’s golden age. But looking forward is Southern, too. And forward is better.

Tommy Tomlinson is a writer in Charlotte. He was a longtime local columnist for The Charlotte Observer and now writes for publications ranging from ESPN to Reader’s Digest to Southern Living. You can reach him at tomlinsonwrites@gmail.com.

This article appears in the September 2014 issue of Charlotte magazine.
Categories: Feature, The Buzz
Contest of the Month