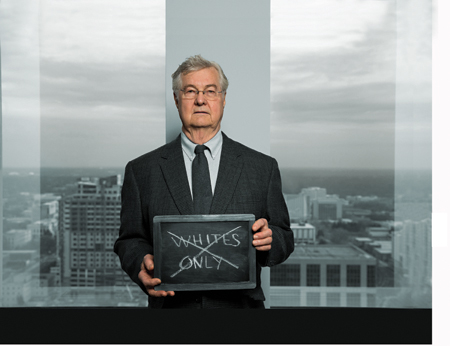 Jack Claiborne, 81, is a retired editorial writer for The Charlotte Observer. He is older than his brother James “Slug” Claiborne by 359 days and has fond memories of his brother’s role in desegregating Charlotte’s restaurants.

Slugger was really something. We were buddies and rivals. He could talk us into trouble and he could talk us out of trouble. He wanted to be a politician or a lawyer and was headed to UNC Chapel Hill law school when his father-in-law, W.W. Bailey, had a heart attack. Slugger had to step in and run the family’s cafeteria in Spartanburg, S.C., which is how he began in restaurants.
He started in the cafeteria business, and at one point he had 15 restaurants, including in Myrtle Beach. Slug’s 30th Edition [on the 30th floor of what is now Two Wells Fargo Center on South College Street, above] was the showplace of Charlotte restaurants for 10 or 15 years in the 1970s and ’80s. It had black columns and a white ceiling, with mirrors on the walls and a piano. It was a tuxedo kind of place, where you’d take a prom date or celebrate an anniversary. It really was a smash.

Back in 1963, business leaders met at the City Club to talk about how they were going to handle the growing civil rights movement and African Americans pushing to desegregate the city’s restaurants. They wanted to avoid future sit-ins and protests. So that’s when Slug told them, “Here’s how you do it: each of you guys take an African American businessman to lunch one day, all at the same time, on the same day. That way all the restaurants will desegregate at once.”
And that’s what they did. Here was this 30-year-old kid who had everything at the time invested in a cafeteria on Independence Boulevard, counting on this idea to work out.

And it worked out.

The most important thing to know about Slugger is that he loved people. And people loved him back. Not long ago, I was undergoing some pulmonary tests in the hospital. I was lying on a gurney. The guy wheeling the gurney looks at my chart and says, “Claiborne, Claiborne. You any kin to that guy who used to run the restaurants?

I took my wife to that tall place for our anniversary. What was it called?” —As told to Ken Garfield