My friends and I reached the mountaintop, but not before crossing a few valleys 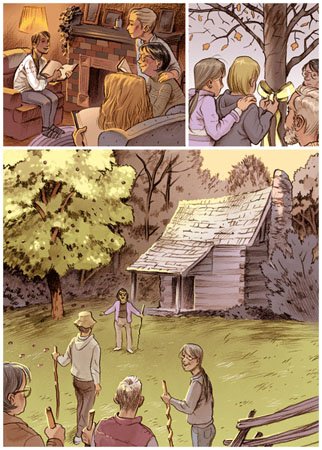 I stood at the corner of the lodge porch studying Cold Mountain. It rose from a bed of clouds in the morning light; other blue mountaintops drifted like islands in the white sea that blanketed the valley below. Against their shores, clouds splashed like waves frozen in a photograph, the spray fixed midair. I adjusted my camera and looked again. Up here on the porch of Chestnut Lodge the air was clear and the sky blue, but in the valley 2,000 feet below, people were waking up under a damp gray fog.

It was Sunday morning at The Swag, a country inn in the Great Smoky Mountains of western North Carolina, and my Charlotte friends were also pulling themselves up out of bed, getting ready for a hike to Gooseberry Knob. Our group of eight—three couples and two single women—began over a decade earlier as a study group at church; six of us were from that original core. Others had come and gone, one of us had divorced, another—me—had remarried. Most of us were in our early forties when we first began meeting, desperate for relief and honesty during the harrowing years of raising teenagers. Since then we'd been through a lot together: getting our kids through middle school, high school, and then college; encountering our children's boyfriends and girlfriends—warding off some and welcoming others; supporting one child through a tour of duty to Iraq, another through a mental illness; and shoring each other up through five marriages and the baby showers that followed. We'd helped each other adjust to parents who needed more care, and to deaths, cancer, job loss, career changes, and physical decline. The women had shared hot flashes, the men had exchanged the names of massage therapists.

In some respects we were as close as family, and in other ways, closer. Careers didn't hold us together; we were diverse: a bank executive, a counselor, artists, a leadership consultant, a homemaker, and a nanny once married to a Texas oil millionaire who grew up riding to school in a limousine. Our childhoods were spent in the North, the South, the Midwest, and West Coast; we were from cities, farms, and small towns. We had learned each other's faults, and we admired each other's strengths. With no common parents or family to bind us, we had made a history for ourselves, together.

In the beginning, things weren't so intentional. We met, chatted, and exchanged safe information about our lives. Choices arose to be honest or beg off; as the years slipped by, each of us, at different points and in different ways, stopped begging off. My turning point came at a crisis with one of my children, a desperate time. I stretched my roots deeper into the soil of this community and found enough water to survive. Life moved forward again.

It took more than time and authenticity to build these friendships; we eventually hit upon commitment. For years, our priorities were fluid. In the beginning, no one thought about the future, about being together in another decade, so our commitments were tentative. Did we like each other? Did we want to give up our time to make this a priority? Choosing this meant not choosing something else. It was almost by accident that we kept coming back to each other, and one year we forgot each other entirely. We moved forward one season at a time, and because we often read books together, one theme at a time.

As we spent more time together, another challenge manifested itself—dealing with each other's faults. Why is it that one can so easily see the flaws in another, but not in oneself? Unlike family, with whom you have no such choices, friends can be collected, rearranged, put in storage, or neglected. It is easy to keep people at arm's length. Perhaps the size of Charlotte—we all live in different parts of the city—helped us to keep perspective. Here, relationships aren't glued together by the strength of shared places—a post office or a single main street or one high school. It takes effort to sustain friendships, and grace.

When we checked into The Swag, each of us picked out a walking stick. One of the highlights of being here is the hiking—the inn sits on 250 acres and abuts the Great Smoky Mountains National Park. Just beyond a split-rail fence are thousands of acres of parkland laced with trails. Choosing a walking stick is part of the tradition here: a barrel sits under a window near the check-in desk, holding glossy rods of varnished hickory, persimmon, dogwood, and elm. Each guest receives a wooden name tag crosscut from a branch; it is dated and has a leather strap so that it can be tied through a hole at the top.

During our three days of hiking, our new walking sticks accompanied us on discoveries of meadows and forests not found on previous visits. The park's very existence is a story of tenacity and good fortune; it once stood little chance of becoming a national treasure. Had it been designated a national forest, as some hoped, timber would have fallen the corporate way. But its instatement as a national park in 1934 secured its future. In time it would become the most visited park in the country.

As my friends and I hiked together, our sense of wonder was refreshed. We found a nineteenth-century cabin in one meadow; in front of it a gnarled apple tree was loaded with autumn fruit. We all sat on the porch and ate lunch, propping up our hiking shoes and leaning our walking sticks against the weathered log walls. The late summer flowers had grown waist high in the woods; small orange blossoms blanketed bushes of jewelweed—a wild form of Impatiens, jostling for space along trails festooned with asters, running cedar, trillium, and wild ginger. At one meadow's edge a flock of wild turkeys moved slowly into the woods, their heads bobbing back and forth like the buckets of a Ferris wheel slowing to a stop. I picked up a feather left behind as they slipped into the brush.

On our first hike that weekend, the walking sticks were like ropes used to pull ourselves upward. Struggling up a steep hill, I was embarrassed by how badly I panted; my legs felt like lead. One of the men was working hard too, even though he is a long-distance biker and rock climber. We shared complaints on that last stretch, relieved to reach the summit and the view it offered. Later, in a conversation with the inn's owner, I learned that the high elevation causes many people trouble the first day. "Where are you from?" she asked, then nodded when I said Charlotte. It's a big jump in barometric pressure because of a 4,000-foot change in elevation. "When we bring potato chips up here, the bags swell like balloons," she said. "Think about what that is doing to your body. You'll adjust."

Walking with these friends has taken me many places. There have been challenges, some due to nothing more than the environment, others to my own weaknesses or theirs. Over the weekend we walked along deeply shaded paths and through mud left by a rain earlier in the day. Knobby grids of roots slowed us down or caused stumbling; occasionally a few lagged behind. The trail was thorny at times, but mostly wonderful; all of it parallels a bigger journey we have shared. We've had trips and spills brought on by carelessness, character flaws, or bad decisions, and unexpected heartache has fallen like rain and left a mess. But when we've walked out into an open meadow and found a cabin, we've had a friend to share it with. And at the mountaintops—a job promotion, finishing a degree, completing a work of art, graduating a student—we've had a hug from the same friend who stood with us before we started the climb.

I was still adjusting my camera when one of the women opened the screen door and walked out on the porch. By now I was standing on the railing, trying to get a picture of the valley below.

"What are you doing?" she asked, laughing. Every angle I tried left something out—the clouds weren't luminous so I changed the lighting; the view was too meager so I zoomed out as far as possible.

"I'm trying to get this on my camera," I said. She looked across the valley; the view was majestic. Holding out the camera, I clicked again and then drew it back into the shade. I sighed when I saw the screen. Steadying myself with a hand on the rough wood wall, I slipped down from the rail. We stood together for a few moments, looking at the clouds in silence. "Nothing captures the light, not the way I am seeing it," I said.

Some things, I thought to myself, are too big to take home.

This article appears in the December 2008 issue of Charlotte magazine.
Categories: Life Lines, Opinion, The Buzz
Contest of the Month