Bon Appetit honors Kindred as one of the best new restaurants 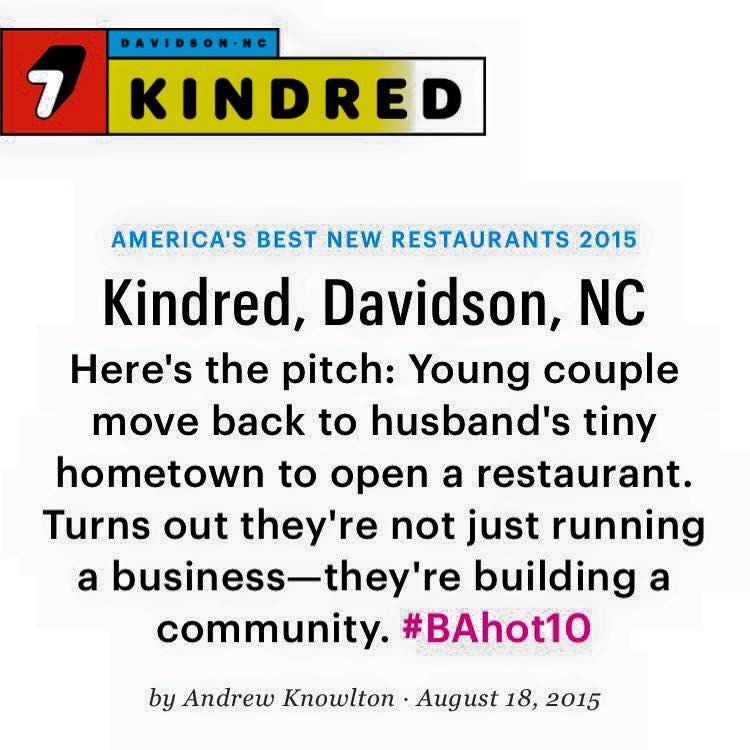 In a statement, Chef Joe Kindred said, "We are incredibly honored and blessed to represent North Carolina with this award. This recognition is a testament to our team and their commitment to excellence. We will celebrate tonight and then return to focusing on how we can continue to improve."

Chef Joe Kindred‘s seasonally inspired menu items were highlighted in the Hot 10 list, including the restaurant’s crispy oysters, Carolina shrimp rolls, house-made pastas, such as the squid-ink conchiglie with blue crab and sea-urchin butter, and the now nationally famous milk-bread rolls. Having eaten at the restaurant myself, I can attest to the homey, friendly, comfortable yet upscale atmosphere, the meticulous attention to detail and, of course, the absolutely delicious food.

“We are very, very proud of our team and thrilled to be the smallest town ever to make the list,” said Katy Kindred. In addition to making such a prestigious list, Katy announced via Facebook yesterday that she and Chef Joe would be expecting a 3rd little Kindred. With the crowds that will doubtless now flock to the restaurant nestled in the tiny town, we hope the Kindreds plan on training him or her as another helping hand at the booming eatery.

This article appears in the August 2015 issue of Charlotte magazine.
Categories: By Sarah Nowicki, Food + Drink
Contest of the Month