Let the Chains Ring: Queens of the City Offers Friendship on the Disc Golf Course

The group welcomes all throwers to a 'mecca' for the sport

We’re hanging out near the open tailgate of a Honda CR-V parked alongside the RenSke disc golf course, the least challenging of the three disc golf courses at Renaissance Park in south Charlotte. Tee time is 6 p.m. on this only slightly oppressive Monday evening in August. But a few have shown up early, including 22-year-old Casey Buttke, who moved to Charlotte from Boston in May, knowing no one.

It can be hard to “find your tribe,” especially if you’re a college senior—Buttke’s majoring in criminal justice and political science at Northeastern University in Boston—working a co-op term 800-plus miles from home. Buttke found hers with little trouble.

“I’m still pretty new to disc golf. I’ve only been playing for less than a year,” she says as she dangles her legs from the back of the car. “The biggest thing for me was recognizing that this is so much more than just a sport. This is a group of people who are really dedicated to growing the sport and helping each other. … It was just astounding to me, the level to which I was welcomed and immediately accepted. These girls have been incredible.”

They belong to the Charlotte Disc Golf Club’s Women’s League, formally the Women’s League by Queens of the City, a 13-year-old group whose members play on Mondays at Renaissance Park during the warm months. You’ve probably seen disc golfers in action (if that’s the right word); they’re the folks in parks who fling what look like Frisbees into steel-chain baskets mounted on poles. The discs aren’t Frisbees—they’re heavier, sturdier, and pricier. But the California man who patented the Frisbee, “Steady Ed” Headrick, later designed the baskets that serve as “holes” in disc golf. 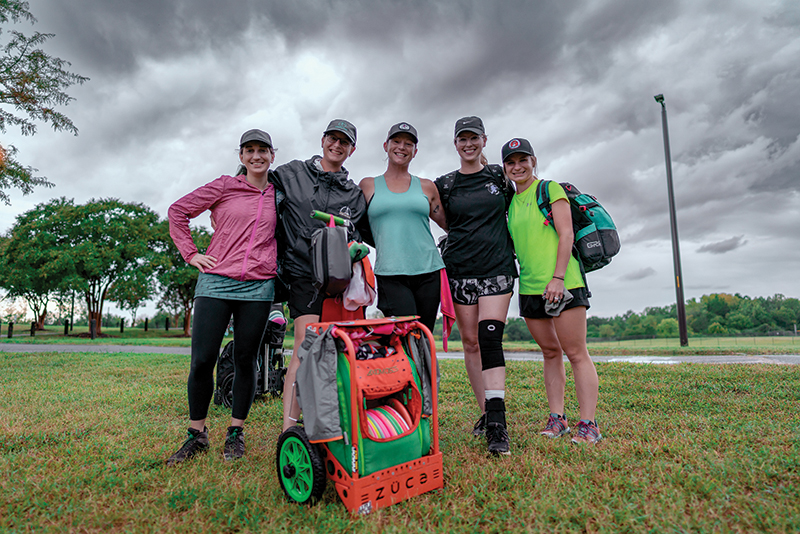 Alli Hnatt, Nikki Adams, Cheryl Peskir, Haley Folkestad, and Alyssa Hayles. Hnatt and Peskir are co-directors of the Women’s League, which allows nonmembers to play, too.

The object of disc golf mimics that of regular golf: Throw your disc into the basket in as few attempts as possible. Women’s League players compete not against each other but against their own handicaps, baselines that allow players of varying skill levels to join the same league. (A beginner, for example, could complete a course in 60 strokes, and a veteran in 48, and they could finish with the same score against their relative handicaps.) You don’t have to be a formal Queens of the City member to take part in Monday night competitions. The club’s website helpfully outlines the fees: $5 for members, $5 for nonmembers.

And Charlotte, as Buttke knew even before she moved down, has emerged as one of the nation’s premier destinations for disc golfers. The national disc golf resource UDisc ranked the Charlotte area fourth in the nation and first in the South in its list of top metropolitan areas for the sport in 2021. “I actually think that’s understating it a little bit,” says Women’s League co-director Alli Hnatt, another of the early arrivals. “I’ve seen us considered the mecca.”

The number of courses, 17 by the Charlotte Disc Golf Club’s count, has a lot to do with the ranking. So does the weather, even compared to the three metro areas UDisc ranks above Charlotte: Lewiston/Auburn, Maine; the Chicago area; and Minneapolis-St. Paul. You can play here virtually year-round. Among the professional disc golfers who live in the Charlotte area is Hailey King, a Wisconsin native who lives in Indian Trail. Winthrop University in Rock Hill has hosted the U.S. Disc Golf Championship every October for 24 years, and it’s quickly followed by the annual Disc Golf Pro Tour Championship at Hornets Nest Park in Charlotte. “If I want to go out and play a round or in a league, there’s always something going on,” Buttke says. “I think that’s really cool.”

King, at 20, is one of disc golf’s top female players—one indication of how the sport, mostly a man’s pastime since its birth in the mid-1970s, is increasingly making room for women. Buttke has spent her co-op term working for the Cornelius-based Ulibarri Leadership Foundation, which professional disc golfer Paul Ulibarri founded in March to provide college scholarship money for young disc golfers. She plans to wrap up in December, move back to Boston in January, and graduate in May. She may not move back to the Charlotte area after that, but if she does, she’ll be able to rely on a tight tribe of women for support.

Just before 6 p.m., Cheryl Peskir, Queens of the City’s other co-director, strides up to Buttke and greets her with a warm embrace. Peskir, 42, has had a rough day. She tells me later that she’s learning a new trade as a diesel mechanic, and she had a panic attack on the job.

Peskir’s played disc golf for more than 12 years, and she says it helped her endure her divorce and the deaths of her parents, especially her mother, who died last year of kidney cancer. When Buttke joined the league in spring, Peskir says, they just clicked. “Seeing glowing faces like hers and the other ladies’,” she says, “is what makes my day better.”

“I’m having a rough evening.”