Inside BOCADO Bar + Diner, which serves small plates, late night bites, weekend brunch, and, yes, a burger that lives up to the hype 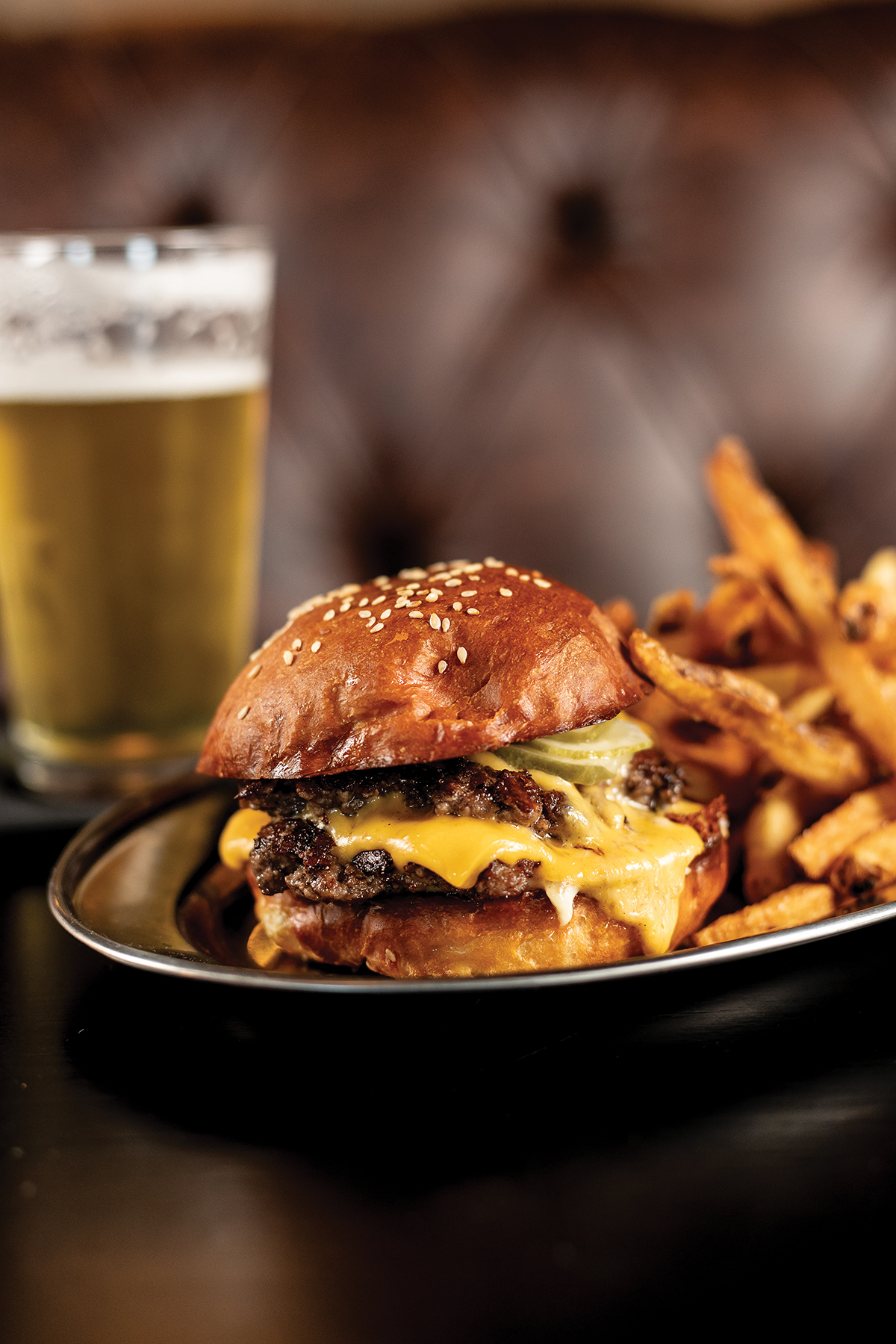 BOCADO Bar + Diner uses a familiar formula—a menu heavy on seasonal small plates and craft cocktails in an approachable neighborhood setting with a patio—and it works. The Atlanta-based restaurant’s Double Stack Burger already had a cult following and a write-up in Forbes magazine when it opened in Atherton Mill in late June. With a prime location along the Rail Trail in a cluster of South End hot spots like Trolley Barn, Indaco, and O-Ku, BOCADO didn’t need a big buzzy opening to attract South End’s millennial set or the date night crowd.

Restaurateur Brian Lewis opened BOCADO—Spanish for “bite,” “morsel,” or “mouthful”—in Atlanta in 2009, then a second location in suburban Alpharetta in 2015. The Alpharetta restaurant emphasized the “BOCADO Burger,” and today, as he shuttles from Charlotte to Atlanta and back, it’s not uncommon to see him flip burgers in the kitchen or circle the dining room to greet guests and clear plates. “(Bocado) is how I like to eat, where you share a little bit of everything,” he says. “We never set out to be a burger restaurant; that just happened.” 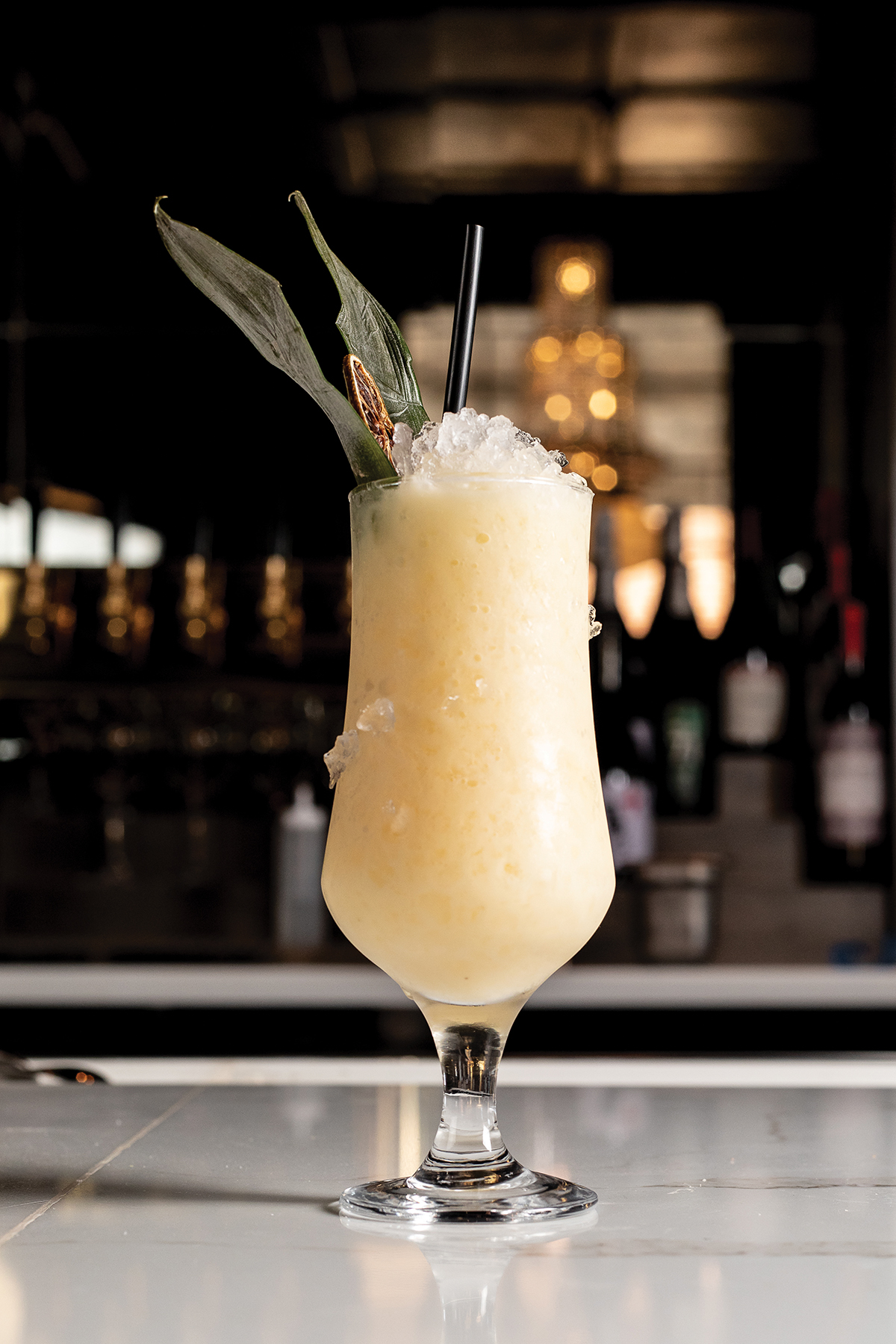 (Above) The Cobra Kai cocktail combines gin, passion fruit, lime, coconut, and cinnamon. The Blackened Tuna Sandwich (below) is topped with avocado, arugula, and spicy mayo. 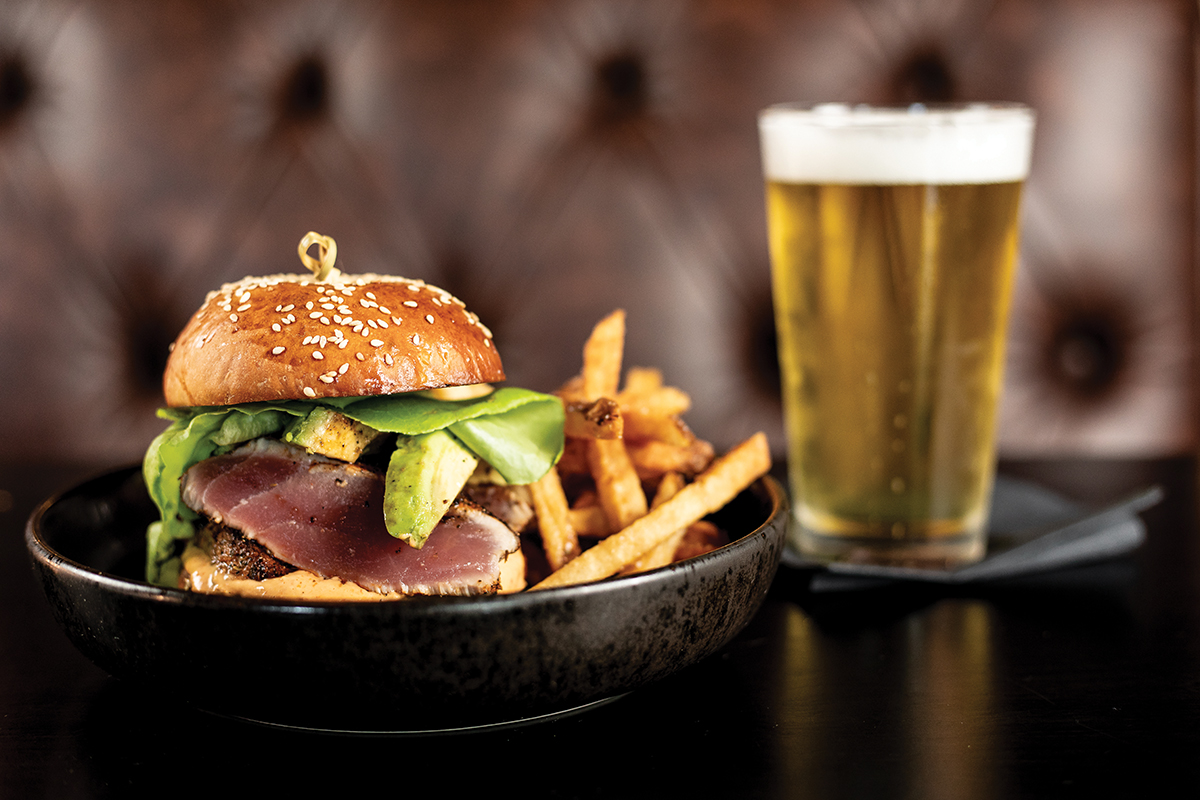 The 2,700-square-foot interior, which previously housed Big Ben Pub, is part industrial, part French brasserie. Crystal chandeliers hang from lofty ceilings with exposed pipes, and oversized mirrors and French posters line the exposed brick walls. The dining room has banquette seating with dark leather booths, and the open kitchen allows diners to see (and smell) meal preparation. If you’d rather sit outside, the elevated patio has fans and a fire pit, so it’s comfortable year-round.

Behind the bar, beverage director Stephen Kuzminski mixes cocktails like the Cobra Kai ($13), with gin, passion fruit, lime, coconut, and cinnamon; and Unpopular Opinions ($12), with herbal liqueur, lemon, hibiscus, and cava. They also have a wine list and local beers on draft, plus an extensive whiskey selection. The weekend brunch menu includes cocktails as well as espresso, lattes, and cold brew.

If you come for dinner, bring a few friends and order a mix of small plates. Chef Adam Schorr serves starters like Deviled Eggs ($10.95) with pickled okra and shallot and Painted Hills Steak Tartare ($14.95) with house chips that disappear alarmingly fast. For something lighter, try the Red Quinoa ($11.95), dressed up with avocado, cilantro, and radish, and served with a tangy dollop of cashew lime butter. 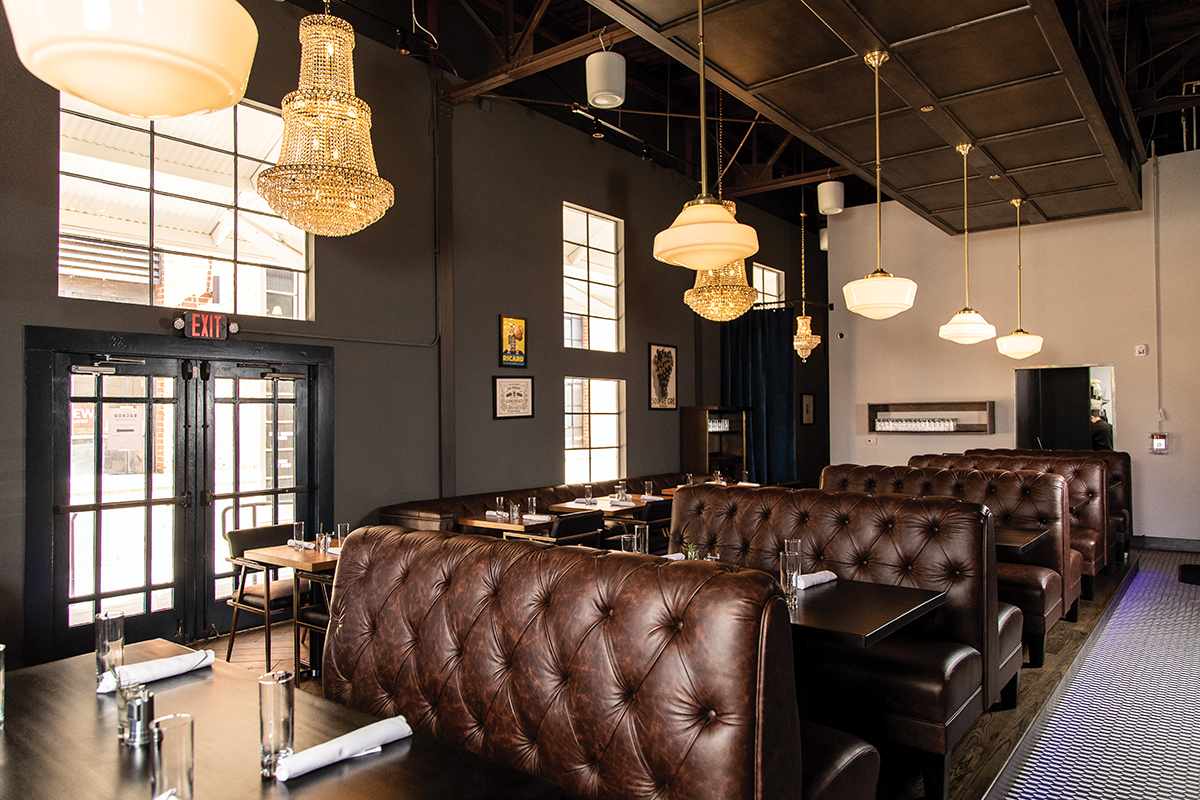 The dining room has dark leather booths, crystal chandeliers, and French posters on the walls.

You’ll probably notice a disproportionate number of plates with the Double Stack Burger ($16.95) landing on tables across the dining room, but don’t feel basic if you order it. Lewis explains, “This isn’t just any burger you could make at home. This is a steakhouse burger with three different types of meat.” The patties blend short rib, chuck, and brisket; they’re crispy on the edges, juicy in the center, and layered with American cheese and pickles. That’s it: heaven between two sesame seed buns.

Other standout entrees include Carbonara ($17.95) with smoked pork belly, mushrooms, egg yolk, and parmesan; Blackened Tuna ($21.95) with avocado, arugula, and spicy mayo; and the Local Roasted Veggie Bowl ($17.95) with rice and watercress pesto. If you order a side, the regular fries ($4.95) don’t disappoint, but we recommend upgrading to the herb fries ($6.95).

The late-night menu includes a Fried Chicken Sandwich ($14.95) topped with coleslaw and spicy mayo and Fried Bologna ($12.95) with cheese fondue. Come for brunch on Saturday and Sunday between 10:30 a.m. and 3 p.m. for Torta Espanola ($12.95) with potato, onion, roasted tomato, and farm sausage; Avocado Toast ($12.95) with poached egg and pickled red onion; and Milky French Toast Muffins ($11.95) topped with fried chicken and maple syrup. 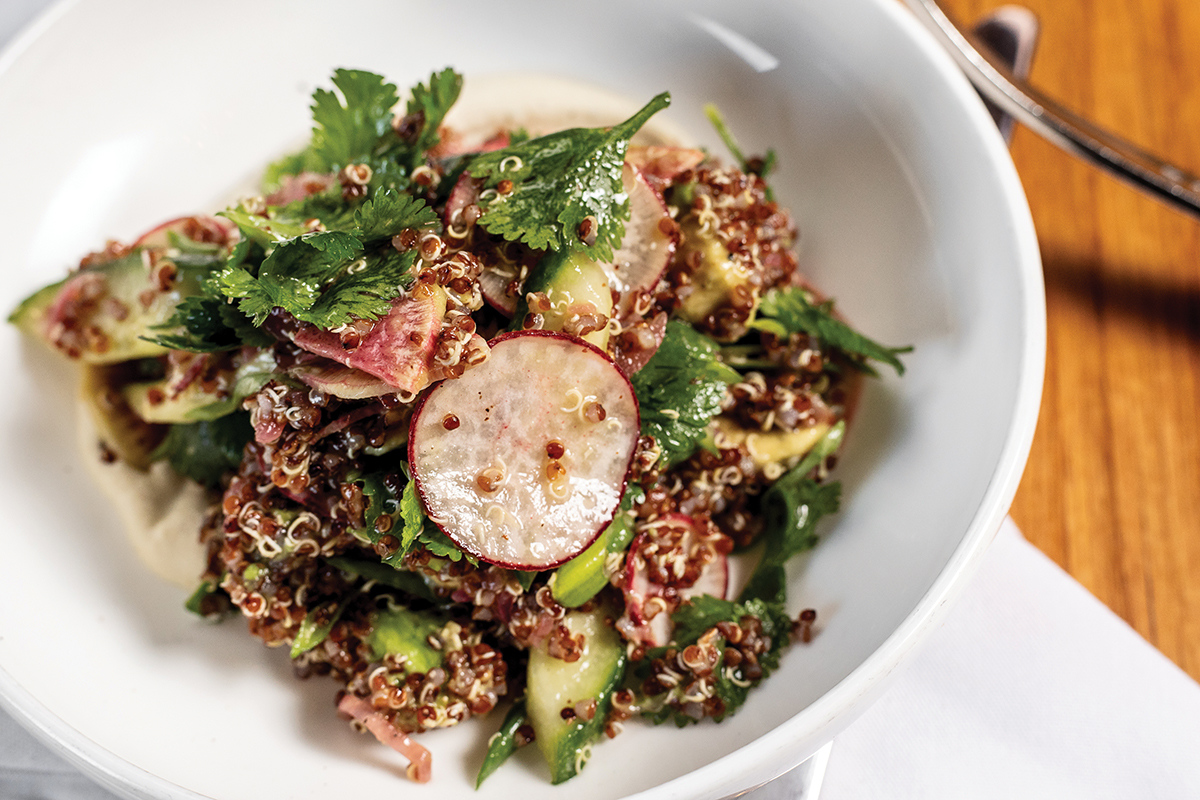 The Red Quinoa with avocado, cilantro, radish, cucumber, and cashew lime butter (above); and the Seared Arctic Salmon (below) with cauliflower puree, brown butter, and radish. 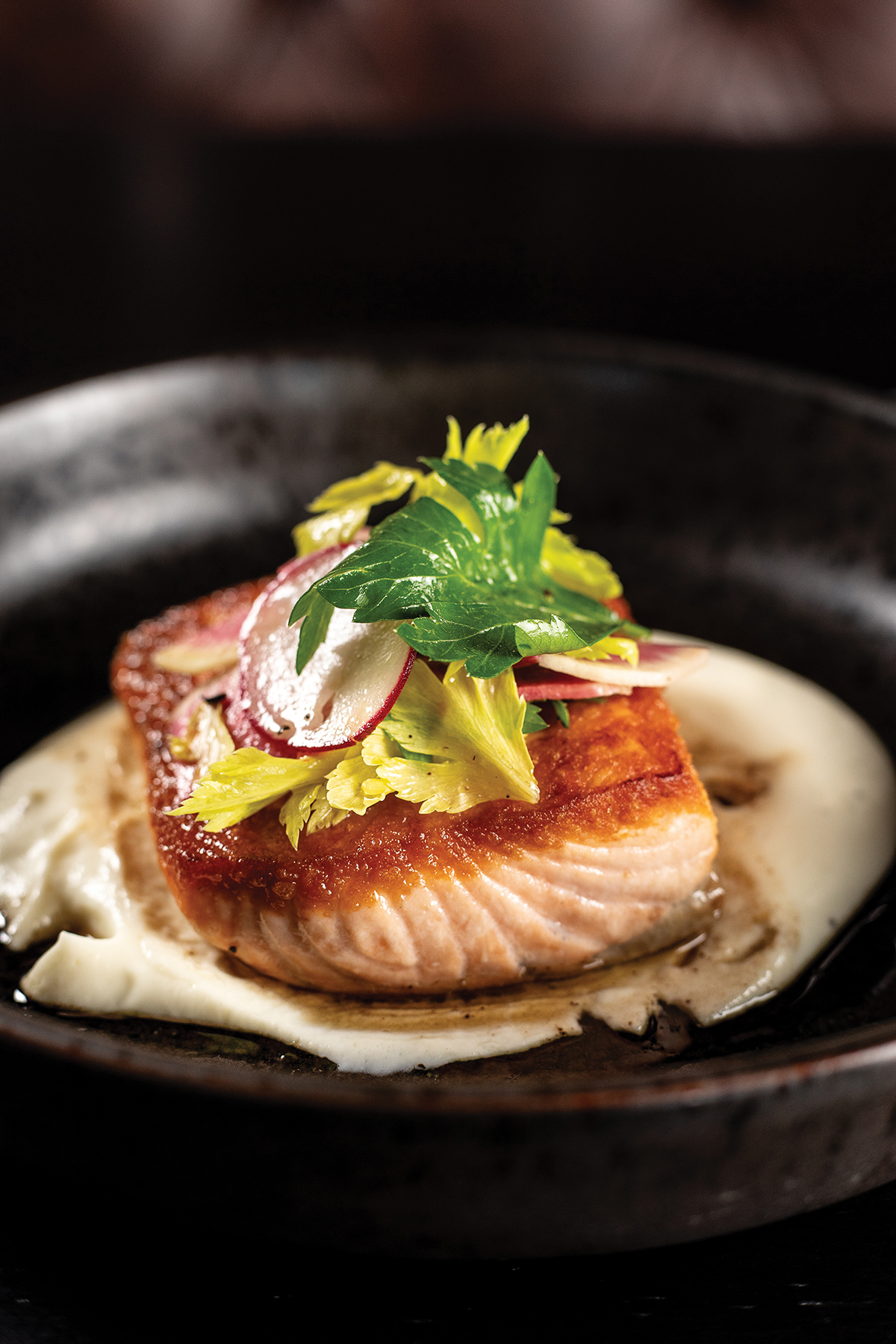 BOCADO doesn’t serve dessert, but when a restaurant has an all-day menu, late-night bites, happy hour snacks, and weekend brunch, you don’t really miss it. You can always stop by Jeni’s Splendid Ice Creams or have a nightcap at Vin Master and people-watch along the Rail Trail. Whatever you do, just don’t skip the bathroom before you leave. The toilets have heated seats with a remote for temperature control. You can thank us later.

Don’t leave without trying: The Double Stack Burger ($16.95) topped with American cheese and pickles with a side of herb fries.

*At press time, the restaurant planned to begin lunch service in the fall