He’ll light the uptown tree this year, but Santa is a millennial 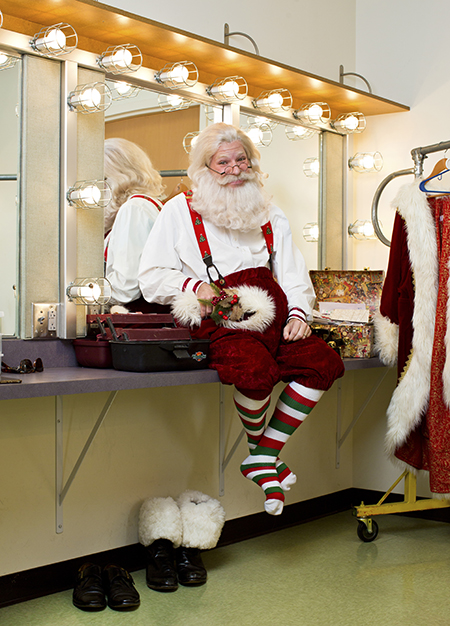 A BIG CHAIR had an empty seat. The man booked to play Santa in the 2010 Festival on the Square in Granite Falls died unexpectedly. The Caldwell County town needed a new Santa with little time to find one.

The festival director sought a hometown teen who studied at UNC School of the Arts. The student—17-year-old Caleb Sigmon—initially turned down the part, but decided he couldn’t leave a Christmas festival without a Santa.

Caleb, however, loved it. He’s been playing Santa ever since. Now, at 24, Caleb remains an unlikely Santa. There’s his age, for one. And his appearance. This professional actor and illusionist passes more easily for a young Benedict Cumberbatch than a Saint Nicholas.

The transformation comes via his wife Katy, a professional theatrical costume designer. She created his custom Santa suit, and although the magic of Santa can be in question, the magic of Katy’s costume cannot. Put a picture of Caleb in everyday life beside a picture of him as Santa, and it’s tough to spot a similarity.

Even though Caleb doesn’t naturally look like Santa, he does sound like him. The energy. The enthusiasm. The love of kids and magic. This is not just a gig, but it’s the role he anticipates all year: working long hours each holiday season to bring smiles to kids—which sounds like the job description of someone else…

Caleb will be Santa in this year’s uptown and South End tree lightings. And, as always, he’ll return to that original big chair in Granite Falls. Here he is in his own words, edited for clarity and length.

People tell Santa things that they don’t tell other people. It was my first night as Santa, and this young man came up to visit and sit on my lap. He wanted a pair of shoes and a toothbrush for Christmas. It hit me so hard. What am I supposed to say to this boy? I had this huge moment of realizing how much responsibility had been placed upon me in this role. The only thing I could say to him was that I was going to pray for him and do everything I possibly could to make sure he had the best Christmas ever. And I don’t know if he got shoes or a toothbrush for Christmas. But that boy is probably the reason that I still put on that suit each Christmas.

I’ve been peed on, thrown up on, kicked in the shin, punched in the face. I’ve gotten it all. And I think that’s one of the things that also keeps me coming back; it’s a little bit unpredictable and slightly dangerous. Especially with toddlers. You never know how they’re going to respond. They’ve heard of this guy all year long … They’re all hyped up. You’ve got to read them.

Once there was a gentleman who walked into the line alone, and I saw that he had a picture frame in his arms, the picture facing toward him, held close to him. He turned the picture around, and it was a picture of this really adorable, tiny baby that was wearing a little (hospital) armband. He asked, ‘Do you mind taking a picture…’ but he couldn’t get through his question. I didn’t ask; it was understood (that the baby had died). So I said ‘Yes, absolutely’ (and put the frame on my knee). I wanted to make him feel comfortable, and I can’t even imagine what he must’ve felt like even leaving his car and walking into the mall. You couldn’t hear anything else in that room but the snap of that camera. Time slowed down … The dad chose the picture that he really liked and got out his wallet to pay, and I told him that there was no way we’re going to ask him to pay for this. He was going to give the photo to his wife for Christmas. He didn’t know what to say. We hugged each other. As soon as he left, I just lost it.

I shared the story on Facebook with my friends, and it really exploded, which I didn’t expect to happen. The majority (of messages) were from ladies who went through the loss of a child: ‘I want you to know that this photo inspired so many grieving grandmothers and mothers to do the same.’ That’s my payment for this. Being able to connect with these people.

(Being Santa) has taught me how I default to putting on horse blinders in my life. And everything to (kids) is so amazing and magical. Today, I did not look at a single cloud in the sky to see if it looked like a dragon or a horse or a rhinoceros. Kids do that. I feel like they’re so in tune with the world around them. I think that they love harder. That’s something that I’m learning and will continue to learn—how to love with more reckless abandon, and how to choose to see more wonder.

I call it the interview, when the kids and I banter back and forth a bit. One year, a boy and I were pretty knee deep in our interview, and I asked him, ‘Have you been good this year? Are you listening to grownups? Cleaning your room? Eating your vegetables? The important stuff?’ And he looked at me and he said, ‘Santa, I’ve been medium well this year.’

This is about coming to visit Santa, this is not about the picture. The photograph is a product of the experience … Adults have this hyped up. Everything has to look just right. I would say 98 percent of the time, they really miss out on the experience, on something they can truly remember because they spend it worrying about something that’s so small and so insignificant. And then the child gets frustrated and bursts into tears, and we were just wanting to hang, you know? This is our one time in the year to get to see each other and talk. And it’s kind of washed away in the flood of expectations of things that are unimportant. Truthfully, the shoulder strap that slipped down or the hair being messy is probably what’s going to make that picture most special down the road.

I do stuff pretty differently. I don’t always wear gloves or a hat, sometimes I think that’s a little intimidating to kiddos. I play on the floor a lot, and that’s what makes a difference—the comfort level in the experience.

Playing on the floor is where the magic happens. I’ve got a little golden elf hammer and a wooden truck. I sit there and I hammer on the wheels and play with the knobs. If the kids are really shy, hiding behind the parent’s leg, I’ll just say, ‘Oh hey, good to see you! I’m just working on my truck, and I’ll be with you in a minute.’ I’ll roll the truck over to them and ask them to roll it back. And they’ll roll it back, so I’ll say, ‘It works! Thank you!’ And I get them to invest in this object. I’ll roll it back, but I won’t roll it all the way, so they have to come a little closer. Before you know it, we’re sitting on the floor together, working on the truck. We look up, we grab a picture, and then we can talk about our visit. Especially with kids on the autism spectrum, it’s much easier to relate to an object than to a person. That’s how they’re able to visit with me and connect.

‘What is your favorite cookie?’ That’s a big-pressure question. They may watch a movie and the Santa in that movie says that he loves chocolate-chip cookies or they may read a book that says Santa loves snickerdoodle cookies. And so I just start naming all the cookies. ‘I really like a chocolate-chip cookie, but I also like a sugar cookie.’ And then we talk about snickerdoodles and macadamia nuts, and then I’ll say, ‘But you’ll never believe what I had today: a macaroni-and-cheese cookie!’ And the kids always laugh, and it diffuses the pressure of giving them a definite answer.

Kids may ask, ‘Are you the real Santa?’ My blanket response to all of them, no matter how old they are, is ‘That’s something I can’t tell you. It’s up to you to think about on your own. But I believe that Christmas magic is real, and Santa’s love exists in all of us.’ And really, it’s not my job to make them believe that I am Santa Claus. It sounds political: I can neither confirm nor deny. So I’ll say, ‘That’s up to you. If you don’t think I’m Santa, that’s fair. That’s fair. But I do drive a sleigh. I have a factory of elves. Rudolph and I played in the yard this morning. But hey, that’s up to you to decide.’

This picture is something that people will keep and cherish. Maybe when they’re 65 and showing their grandkids their picture with Santa, they’ll say, ‘And that’s the day Santa told me about a macaroni and cheese cookie.’

This article appears in the December 2017 issue of Charlotte magazine.
Categories: In Print, The Buzz