With its timely new exhibit on the black male image, the Mint dares to offend and get people talking about one of our most divisive issues 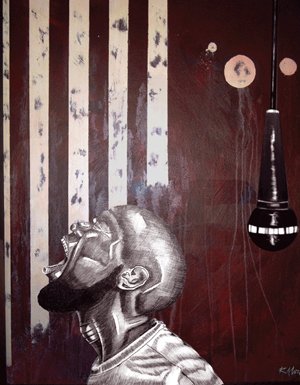 The week after the Mint Museum of Art opened its current exhibition, Scene in America: A Contemporary Look at the Black Male Image, the Angry Black Man was all over the news. Looked for in the person of Barack Obama, discovered in the person of Jeremiah Wright, the Angry Black Man became fodder for YouTube and television news clips, radio talk shows, and newspaper editorials from national writers like Maureen Dowd and local columnists like The Charlotte Observer's Mary Curtis.

Since late April, an angry black man has hung on a genteel wall at the Mint. Seen in profile, with his head thrown back, eyes squeezed shut, and mouth agape, he screams out an emotion that must be what William Faulkner called "impotent outrage." He is the subject of I Wanna Kill Sam, a mixed-media painting by Charlotte artist Antoine Williams, one of twenty-seven pieces in the Mint's provocative exhibition.

The Mint Museum is best known for its extensive ceramics collection, its pre-Columbian artifacts, and two enormous portraits of Queen Charlotte and King George III. Scene in America gives the museum a new look, and a new outlook. Drawn from local holdings—the Mint's own, the Van Every Gallery at Davidson College, and private collections—the exhibition tackles a sensitive social and political issue that is both national and intensely local.

It all started with Philip the Fair. Every bit as imposing as the British monarchs in the next room, the nine-foot Philip stands proudly amidst a florid floral design and gazes down on viewers, challenging them to judge him. A tough dude from the hood, he wears an Astros T-shirt and baggy jeans, but his right hand gently holds a tulip.

The Mint acquired this massive painting by Kehinde Wiley in 2006. The work's unique, paradoxical portrayal of a young African-American man inspired Carla Hanzal, the Mint's curator of contemporary art, to suggest an exhibit of pieces that depict black males. She gave the project to Kimberly Thomas, the new curatorial assistant and an art history major at UNC-Charlotte. Scene in America is Thomas's first show.

The Mint calls the exhibition "groundbreaking," and in some respects it truly is. Such an overt study of a politically charged subject is uncommon fare for the Mint. But, Thomas says, she found nothing but support for the project from the museum's staff. "People were so excited that we were going to do a show like this that they were there for me even at the conception of the show."

Thomas began by studying the Mint's holdings. Some of the pieces she discovered had been in the museum's collection for years, but had never been on display. The Mint had owned Juan Logan's A Man Called Nigga, Thomas says, for seventeen years without showing it. "It had to wait for the right time and the right context. It's so controversial."

Perhaps the most complicated work in the show, Logan's abstract acrylic painting looks like a simple chalk drawing of a head on a chalkboard. Created in 1972 when Logan was just twenty-six, it suggests themes such as isolation, the burden of family history, and sexuality—"things that he was dealing with at the time," says Thomas. "During those turbulent years, people were really questioning their identity and where they fit into society."

A subtitle like "A Contemporary Look at the Black Male Image" is sure to suggest familiar cultural types. The Angry Black Man is one of them. Dating back at least as far as Nat Turner's slave rebellion in 1831, the idea of black-male-as-aggressor has persisted in American culture, inspiring fear and distrust in white—and African-American—society (witness the recent controversy over the April cover of Vogue, with screaming basketball star LeBron James clutching supermodel Gisele Bündchen). Equally prominent are the concepts of black-male-as-victim (of slavery, lynching, and less violent forms of racism) and black-male-as-buffoon (in minstrelsy, especially).

Scene in America acknowledges all these cultural types as part of the African-American experience. By parties unknown depicts a young African-American man's body, rope still around his neck, lying face down on the steps of a church. Kingdom Coming is a colorful but sinister drawing of minstrel show entertainers — white men in blackface.

But what is so striking about this exhibition, which runs through mid-November, is its complexity. Not content to examine the black male image from one perspective — or even from three — Scene in America is a kaleidoscopic look at a topic that continues to plague our society. To begin with, although the subject is black males, the artists are a varied group: white men, such as Chuck Close, Ben Long, and Robert Mapplethorpe; black women, such as Elizabeth Catlett and Jeanne Moutoussamy-Ashe; and white women, such as Wendy Ewald. The works were created over a stretch of nearly seven decades, from 1940 to just last year. And the black males portrayed in the works are themselves an assorted group—from children (as in John Biggers' lithograph At Risk) to adults; from the famous (Milton Derr's woodblock triptych of Martin Luther King Jr.) to the ordinary.

Diversity extends to the mediums and styles, as well. Bronze sculpture, watercolor, photography, lithograph, woodblock, oil and acrylic paint, charcoal, collage—many different mediums have been used in styles that range from expressionist to photorealist to postmodern. The sheer multiplicity of visual approaches to the topic makes for fascinating viewing.

And yet, the show's finest characteristic is its thematic diversity. Exploring the black male image in contemporary art, Scene in America discovers many definitions of black men in American culture.

There is black-man-as-nurturer, as in Elizabeth Catlett's bronze sculpture of a mother and child protected by a loving father. There is the self-confident black man in Tommie Robinson's beautiful watercolor, Product. Standing before the public library, wearing hospital scrubs and what appears to be a kente cloth, he projects a quiet pride in who he is and what he can achieve.

And then there are the cheerful fellows in Romare Bearden's collage, Evening, 9:10, 461 Lennox Avenue. Safely in the cocoon of their own apartment in Harlem, two men and a woman are able to relax. For that moment they are no longer black folk in a white world, but just people playing cards.

"If you were to take the black male experience, it is a wide experience," says Antoine Williams on a warm Sunday afternoon shortly after the exhibition opened. "It is seen sometimes as a monolith. But we have so many different experiences in our lives. That show is able to demonstrate that."

Williams and John Hairston, both local African-American artists in their late twenties, have come to a NoDa coffee shop to talk about art and race. Williams is thin, with dark skin, a closely trimmed goatee, and black-rimmed glasses. Hairston is larger, with a smoothly shaved head and skin the color of café au lait. About three years ago, they helped to found a collective called God City that now includes seven local artists. The following year, Williams created I Wanna Kill Sam.

"I was really upset when I painted that picture. We were really struggling to get our name out there without people labeling us as stereotypes."

The work, with its scream of frustration, depicts the black male as both aggressor and victim. "There is a lot of rage because of our history. A lot of times you feel really helpless in it, and that anger boils over." Williams says that God City artists, like the Mint exhibition, try to create "positive imagery, without denying the negative."

"We live in a culture where life imitates art, the media. It affects minorities on a whole deeper level. I remember growing up, not seeing my image reflected on television."

Pop culture images that did appear, Williams and Hairston say, were often of light-skinned African-Americans.

Being black in America has never been easy. In a new book titled Against the Wall: Poor, Young, Black, and Male, Cornel West, a professor of African-American studies at Princeton, writes:

"The gift of black folk and in particular of black men … to this nation and the world is, first, a Socratic gift, the gift of asking questions that cannot be evaded forever, that when confronted and answered make this a better, more equal, more human place."

Certainly, African-Americans have had a complicated relationship with this nation. More than 150 years ago, Frederick Douglass articulated it in his speech "What to the Slave Is the Fourth of July?" Several works in the Mint's exhibition address this question directly, such as T. J. Reddy's Oh Say Do You See? and Hairston's I Want You, inspired by his cousin's decision to join the Marines.

In a Southern city like Charlotte, the relationship becomes especially intricate. A museum, says Hanzal, is "a safe forum to address these complex topics." Hanzal believes that the Mint has a particular responsibility to create such an exhibition. "It's important for Southern museums to look at the context of their history, examining place and identity."

Dr. Jae Emerling, an art history professor at UNC-Charlotte, agrees. "It is unbelievably important that these things [exhibitions with a sociopolitical dimension] happen. Museums have always been not just about displaying great works of art, but also about creating communities. The communities where museums exist are meant to see their lives reflected in the museum."

Those two actions—reflecting communities and creating communities—are intimately connected to a third action: asking the question "Who are we?" Particularly in a city like Charlotte, one of the fastest-growing cities in the nation, a city that has yet to clearly discover and articulate its identity, cultural institutions have an obligation to answer that question. Cultural institutions must reflect the community as it was and is and must also help define what that community will be.

The task, in large part, is to try to comprehend the relationship between yesterday, today, and tomorrow. What have we, as a community, inherited? Which pasts do we embrace and which  do we reject? Which direction are we headed in tomorrow?

In recent years, Charlotte's cultural institutions have begun to seriously grapple with these questions. The Charlotte Symphony's Mill Village Project, in which a multimedia composition was constructed out of the stories of local mill workers, both honored Charlotte's past as a textile town and explored the present predicament that the loss of that industry has created. The Levine Museum's exhibition, Families of Abraham, sought to reconcile differences among local religious communities. Actor's Theatre's production of August Wilson's Gem of the Ocean found a timeless, universal human experience in the concrete lives of African-Americans in 1903. Scene in America joins the ranks of these exceptional cultural events.

"The answer is so much bigger than us," says Williams. It also "makes a lot of people very uncomfortable," adds Hairston. The two young artists feel that Charlotte lacks a true sense of community, often championing promotion of oneself over service to others, what Williams calls a "me mentality."

At the official exhibition opening on May 8, a large and diverse crowd—black and white, old and young, men and women—gathered to view the show and hear introductory comments. "This is not just a show aimed solely at the African-American community," says Emerling. "We live in the city together. Understanding other perspectives—that is what museums are supposed to do, to help create just societies." Hanzal and Thomas hope that the exhibition will encourage dialogue. They have created a blog associated with the show where people can post their comments, a first for the Mint.

"I see this as only promising, for the arts in Charlotte and the city as a whole," says Emerling. "It does suggest a new way of thinking about art in Charlotte."

This article appears in the July 2008 issue of Charlotte magazine.
Categories: Buzz > Arts
Contest of the Month