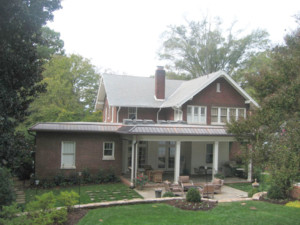 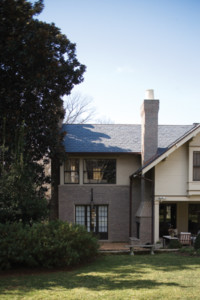 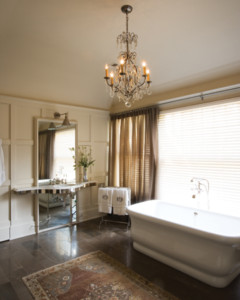 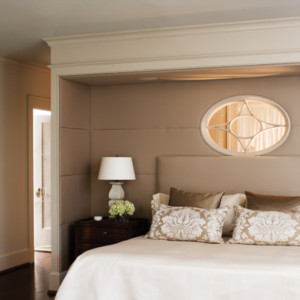 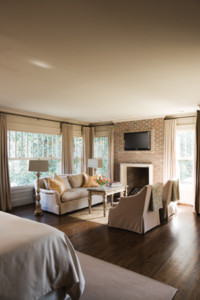 When Beth Quartapella, forty-eight, a stay-at-home mother of ten-year-old twins, and her husband, Drew, forty-six, an investment banker, purchased their Myers Park home in 2004, it had a single-story tenant's house tacked on the back. An initial renovation merged the two spaces, but in 2006, Pursley Architecture created what Beth says was "an amazing plan for a master suite that helped make the whole house seem as if it were planned that way from the beginning."

And the house was sorely in need of a mas- ter suite, as the existing master bedroom was an old sleeping porch surrounded by eight floor-to-ceiling windows (drafty and too bright for sleeping), with one tiny closet and a shared Jack-and-Jill bath with a deplorable lack of storage space (not one cabinet!).

One side of the house faces Edgehill Park, and the Quartapellas had always enjoyed that peaceful view. "There were so many trees … that give the home so much privacy," says Beth. "We wanted to create a master bedroom and bathroom, with plenty of storage, on that side of the property." With the help of Ken Pursley and Craig Dixon at Pursley Architecture, Hubert Whitlock Builders, and designer Kathy Smith of Circa Interiors, they did just that with the 1,247-square-foot master suite.

The design team also accomplished the nearly impossible task of making a uniform-looking roofline above the merged spaces, converted attic space into a playroom for the kids, hid storage areas behind paneling in several downstairs rooms, and added a garage with a workout room above. When the Quartapellas moved back at the end of 2008, they had the home they'd always wanted.

What the realtor says

"If the homeowners added an additional 500 square feet then it is easy to immediately show an added value of $150,000. The space is certainly beautiful (and practical), but adding another $150,000-plus to your bottom line—that will definitely make you sleep better." —Ryan S. Willis, Realtor/owner, Boxwood Realty

Where They Added Value