Mixed, Not Matched: Inside a Transformed Fort Mill Home

French-inspired and modern isn’t a typical style mash-up in the South. But it’s the look Inna Kovalinskiy’s clients were after when they hired the designer to transform their one-story cedar home in Fort Mill. They’d seen the designer’s previous work and knew this wouldn’t be your grandmother’s take on French country. “When I think of French-inspired design, I don’t think of ceramic roosters or heavy toile curtains,” Kovalinskiy says. “I think of intricate moldings and ceiling medallions … gilded mirrors, marble, elaborate fireplaces, and elegance.” But all that opulence can overwhelm a room, so she offsets it with modern elements to give the space “a visual break” with clean, sharp lines. 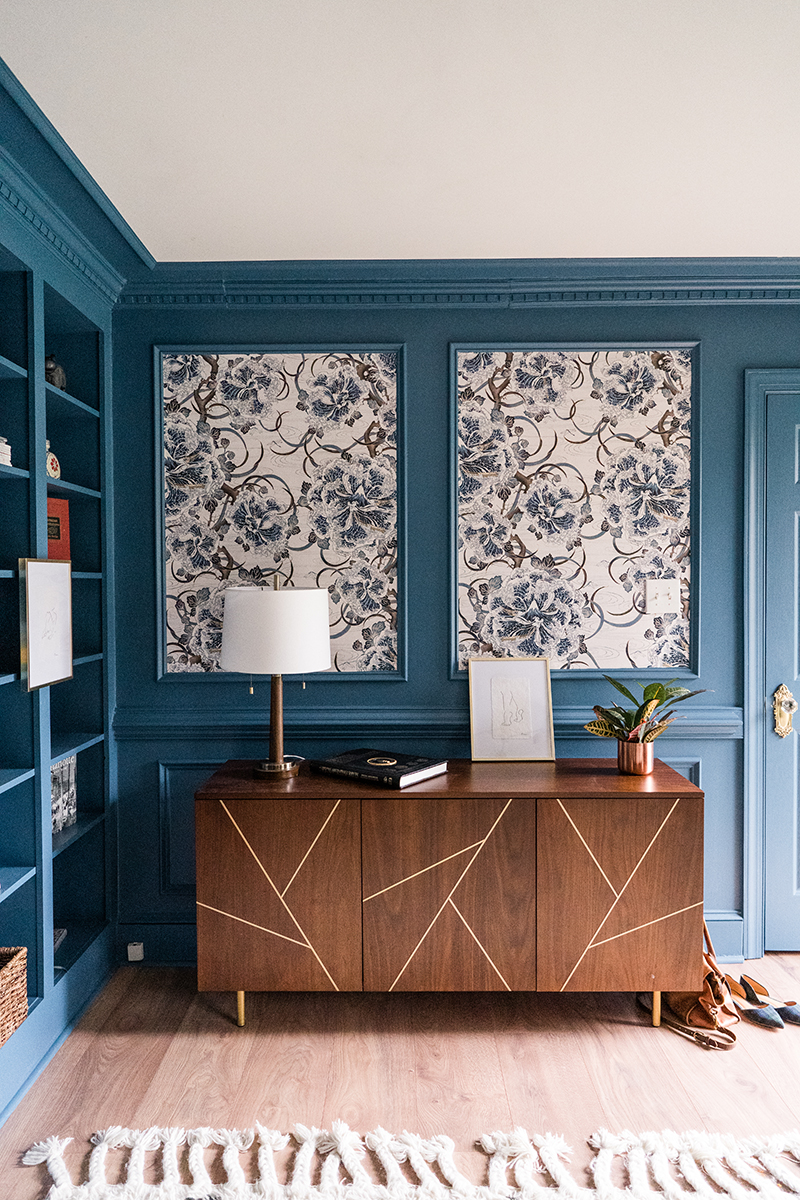 In the entryway, Kovalinskiy added panel boxes above and below the chair rail and installed the wallpaper inside the boxes

When they began the renovation in early January, Kovalinskiy started with the drab, beige entry room, which would set the tone for the rest of the house. To compensate for the low ceilings, she added a base cap six inches from the crown molding along the perimeter of the ceiling to give the illusion of more height. She put in panel boxes above and below the chair rail and installed Great Wave Bloom wallpaper by Milton & King in the boxes. “It’s a Japanese Ukiyo-e-inspired design,” she says. “If you look closely, you can see the flowers are actually waves with little boats inside.” 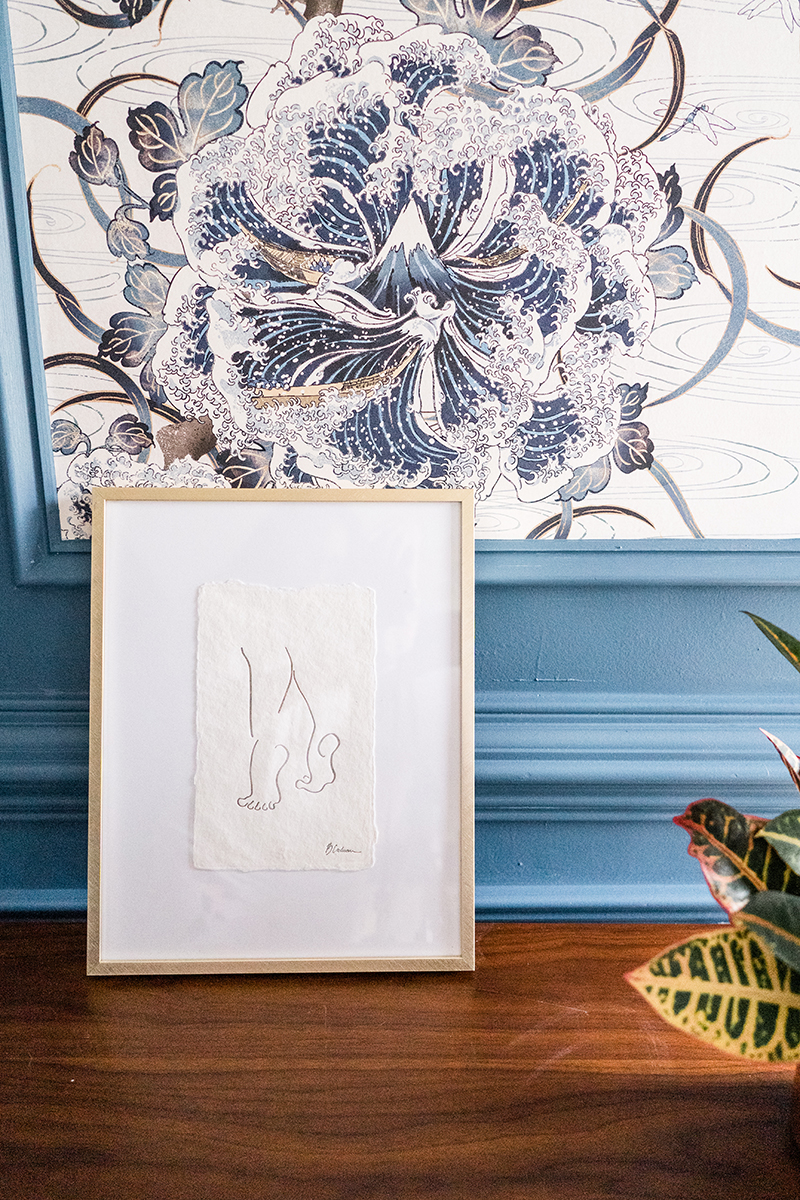 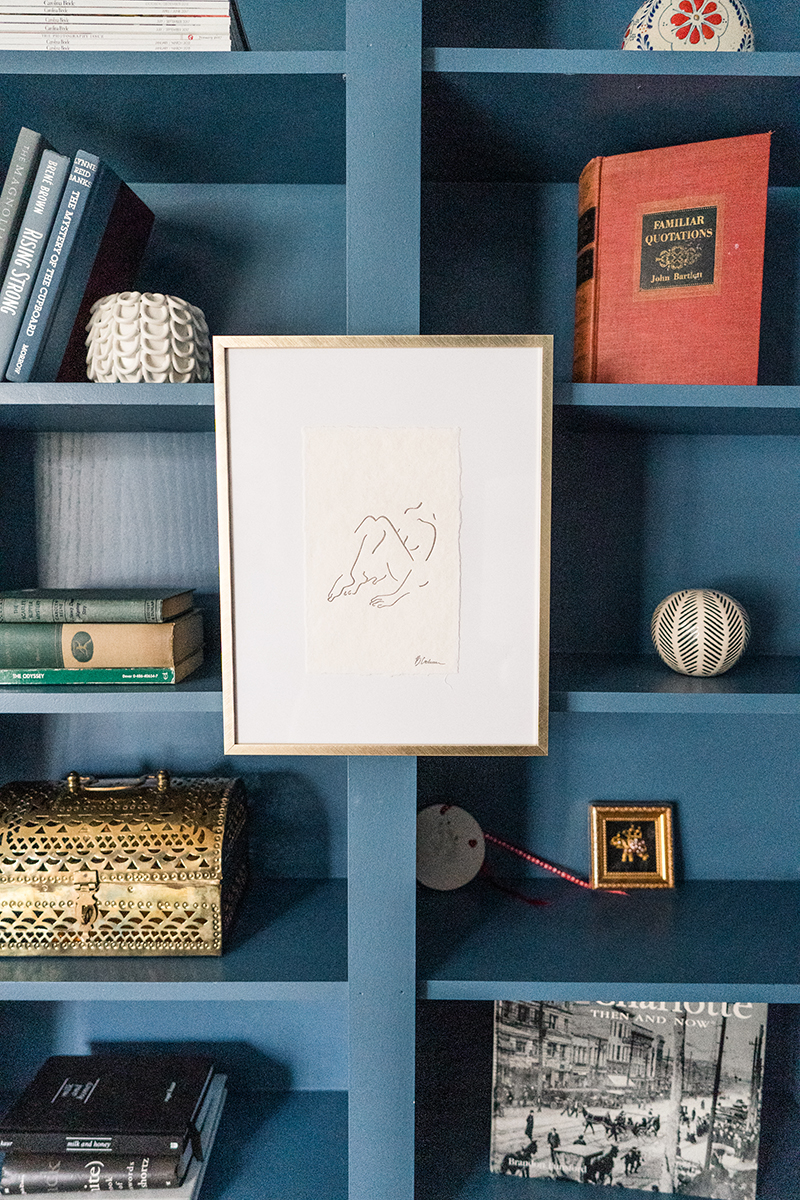 She integrated some French-inspired pieces like the Louis XV side tables with a modern six-light satin brass chandelier from Linea Lighting. Kovalinskiy’s most daring design choice, though, was to punch up the walls and built-in bookcases with a show-stopping Santorini Blue from Sherwin-Williams.

In the dining room, Kovalinskiy continued the molding and panel boxes, added a classic shaded five-light, and refreshed the walls with a coat of Snowbound by Sherwin-Williams. She replaced the old rectangular table with a circular table from Rove Concepts to allow enough clearance to the pantry and laundry room while still comfortably seating six. 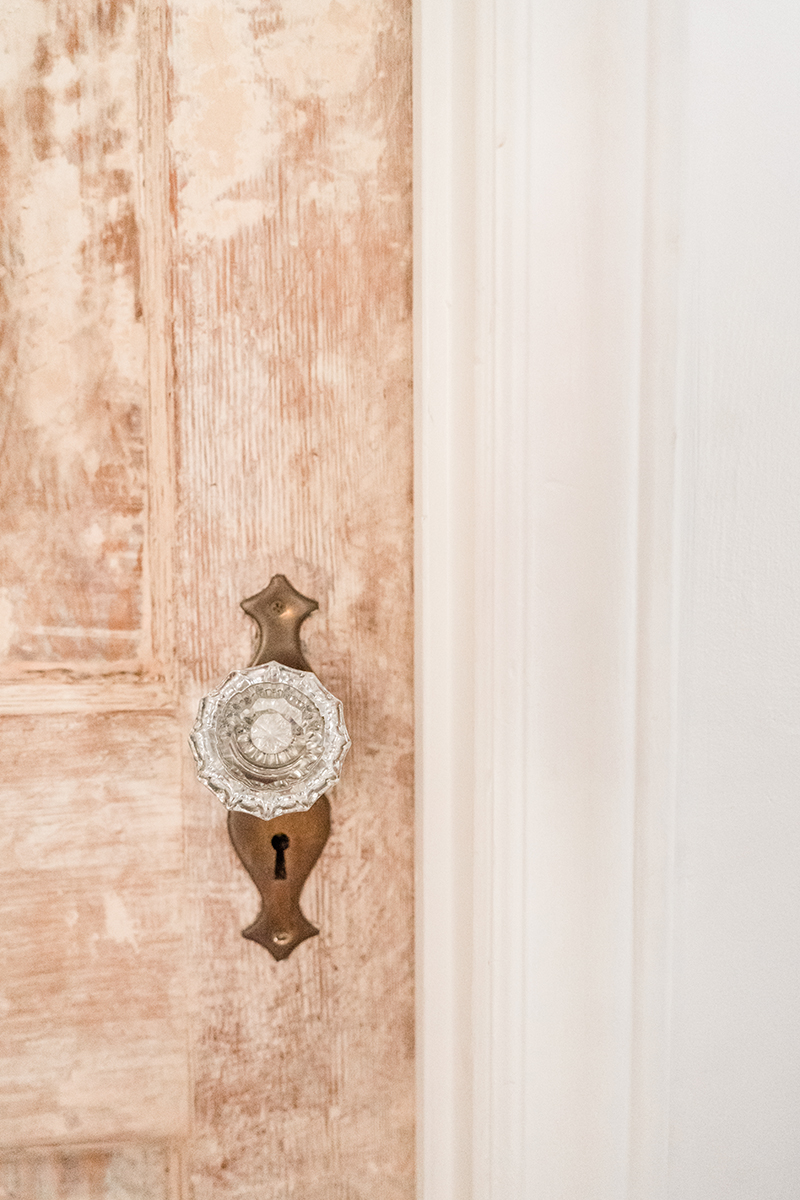 The vintage-inspired doorknob is from Emtek Hardware. 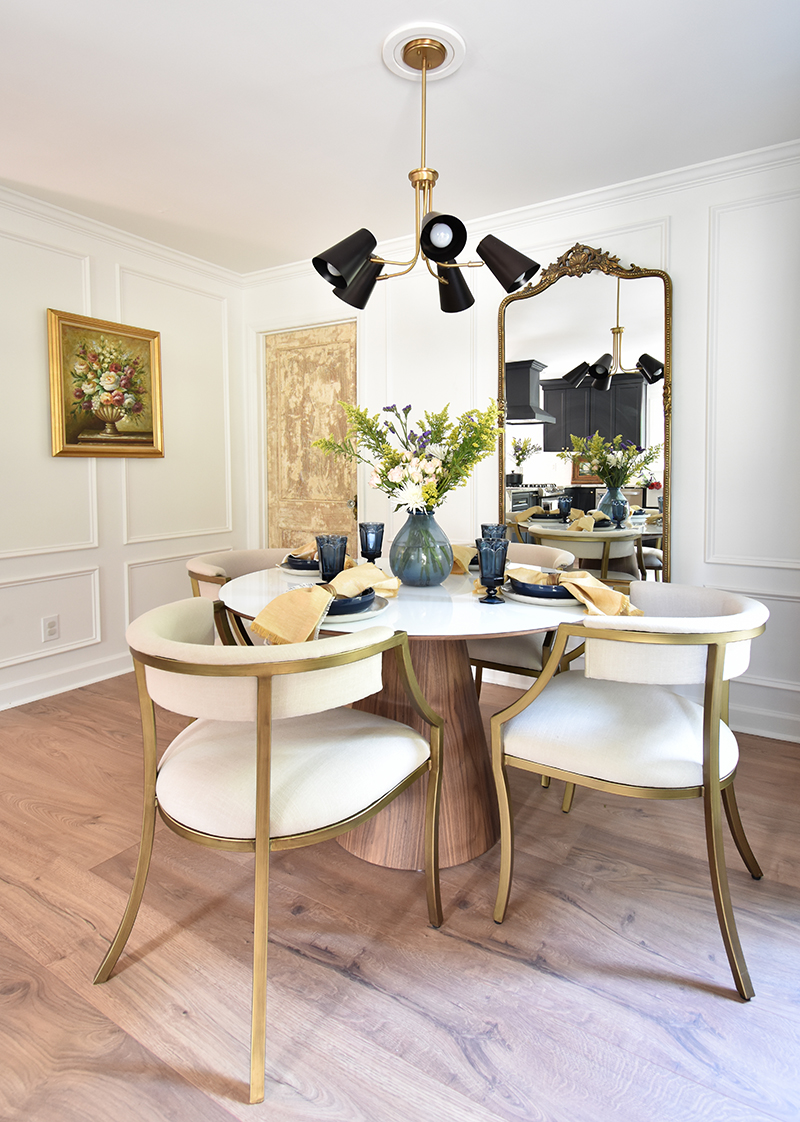 The dining room got a classic shaded five-light and a circular table from Rove Concepts.

The laundry room, which doubles as a pantry, got new cabinets, blue mosaic flooring, a chandelier, and open shelving. To balance the busy blue floor pattern, Kovalinskiy chose black ceiling height cabinets to create the illusion of more height. For a touch of warmth against all the cool colors, she added pops of brass hardware. 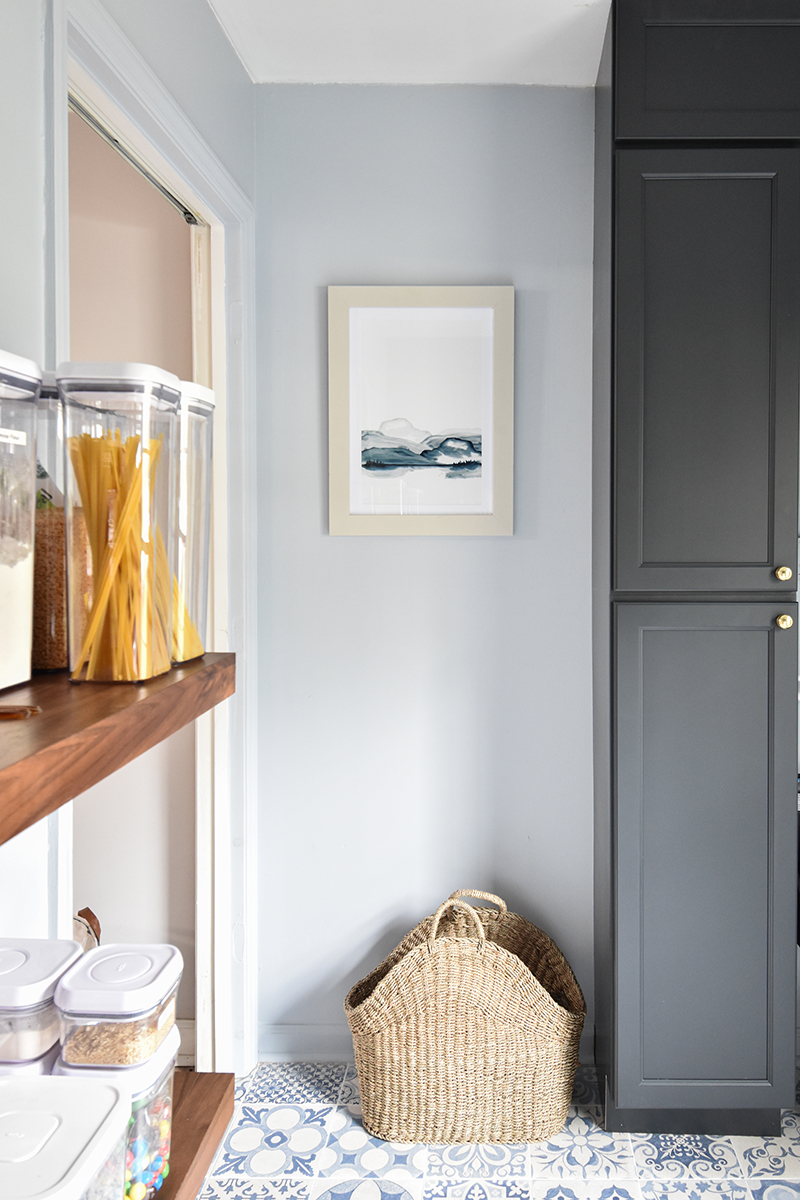 The homeowners needed a practical space that worked as both laundry and pantry.

One of the more dramatic changes to the home was the transformation of the dingy, dated living room fireplace. Kovalinskiy removed the old stone, built a wall extension, and installed slate tiles and a new wooden mantel. The ceiling medallion brings a vintage vibe to the space, and the gallery wall of photos taken by the homeowner adds a touch of whimsy. To keep the palette cohesive with the entry and dining room, Kovalinskiy finished the room with dusty blue drapes.

She says the biggest challenge was the kitchen, where the crew took down a load-bearing wall between the kitchen and living room. Then her team built an oversized bar with cabinets on both sides for additional storage. In the kitchen, charcoal cabinets, brass hardware, and Cambria quartz countertops give it a modern edge. 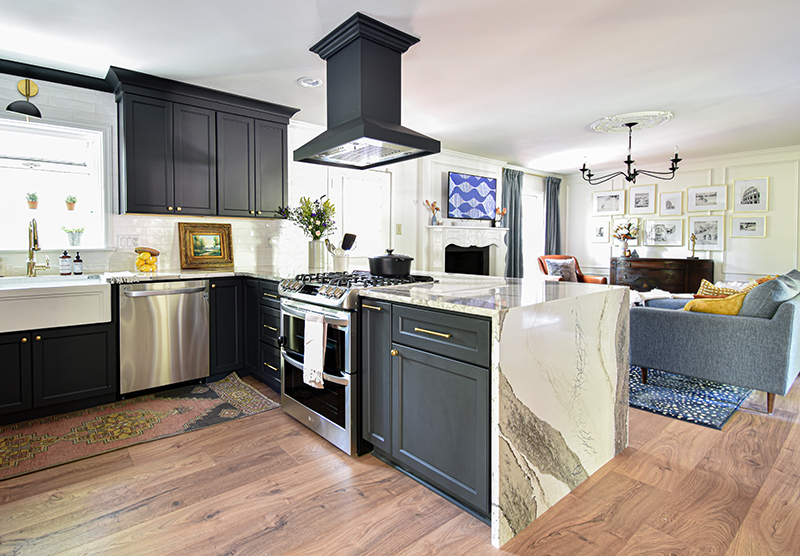 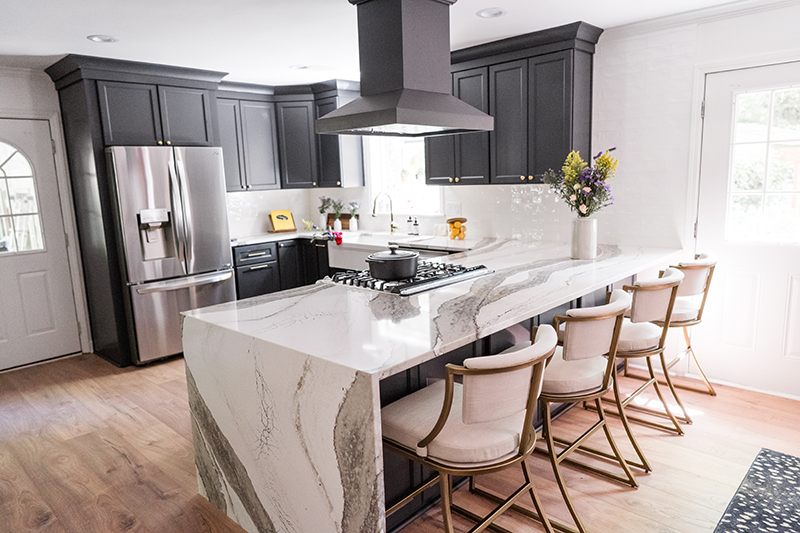 An oversized bar with cabinets on both sides provides additional kitchen storage.

With the three-month transformation complete, Kovalinskiy describes the home as both fresh and classic. “The contrast of styles works so well, respecting the classic influence while embracing what’s new,” she says. She also proves that Parisian and modern not only go together, they belongtogether.

This article appears in the September 2020 issue of Charlotte magazine.
Categories: Home & Garden, The Buzz