Want a cabin’s comfort with just enough nature? Get thee to a yurt

IT’S RAINING. I was afraid of this. Star-bedazzled nights by the fire, perhaps while nursing a spirituous beverage, are supposed to be one of the Smokies’ chief pleasures. The forecast calls for clear skies for the rest of the week. But on this weekday evening in late August, a steady drizzle drums its fingertips on the vinyl roof of my yurt. I’m here for one night, accompanied by my dog. I shall make the best of it.

This turns out to be easy, a representative episode of what’s come to be known as “glamping,” a portmanteau of “glamorous” and “camping.” I have never before stayed in a yurt. For centuries, it’s been the portable accommodation of choice for the nomadic herders of the vast Mongolian steppes, who cover drum-shaped wooden frames with animal felt and use the resulting structure as nighttime shelter they can disassemble and pack up in the morning. (The Mongolian term for “yurt” is ger, which is supposed to be pronounced “gair” but which I pronounce “gur” because, like “yurt,” it’s fun to say.) 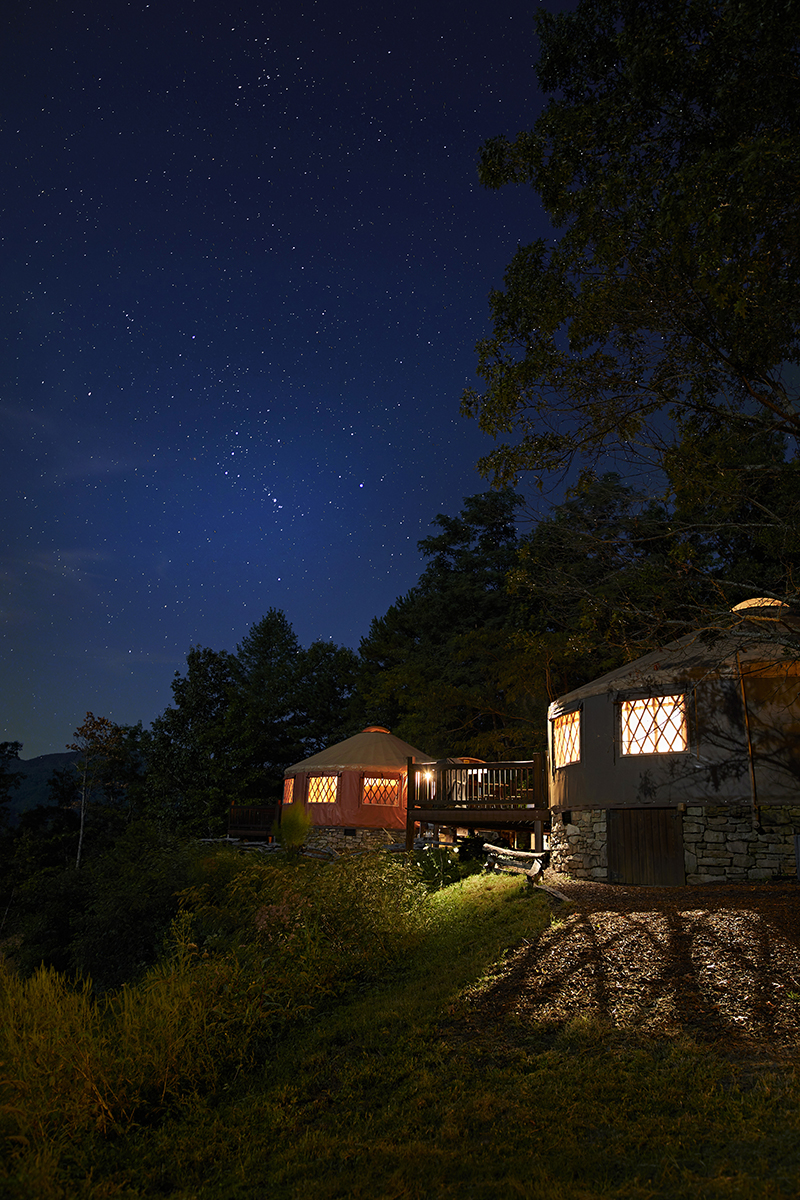 This yurt is tailored to affluent American tastes: queen bed (and a doggie bed, included in the $50 pet fee); tiled, walk-in shower; efficiency kitchen with coffeemaker, toaster, electric skillet, and mini-fridge; flat-screen television; modern split-level HVAC unit; and pull-out couch—all arranged tidily within 314 square (circular?) feet bounded by vinyl walls and a roof that covers an aromatic fir frame. It’s the smallest of the three types of yurt you can reserve at Sky Ridge Yurts, which Melissa Little of Charlotte has owned and operated since 2011. The complex of five yurts—she plans to add two more—and a modern chalet-style cabin for the yurt-averse sits atop a mountain ridge in the Nantahala National Forest about 12 miles southwest of Bryson City, off U.S. Highway 74; it takes a little less than four hours to drive there from Charlotte.

Little started the business after a shattering loss. Her husband, Adam, an avid cyclist and manager of a Charlotte Pro-Am cycling team, was killed in 2010 when a car hit him as he rode to work in Concord. He was 35. The Littles had vacationed often in the mountains, and Melissa, as a suddenly single mother, wanted a job that would let her raise their two young daughters. “I chose yurts,” she tells me, “because, well, they’re cool.” 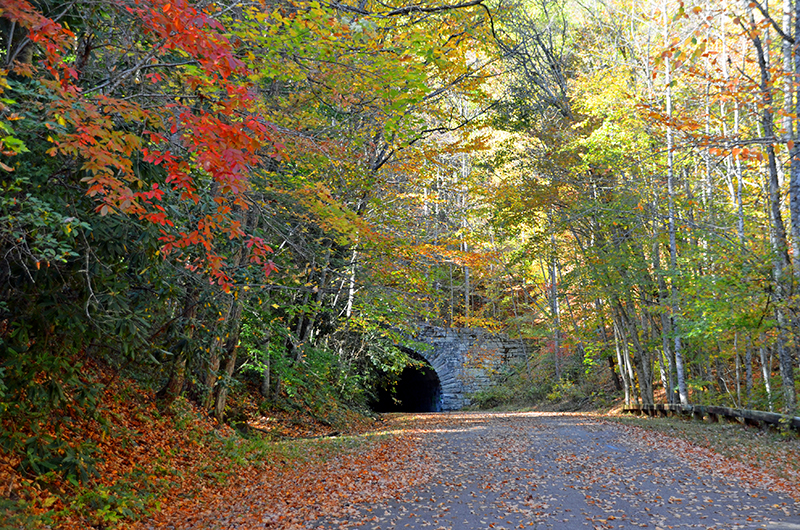 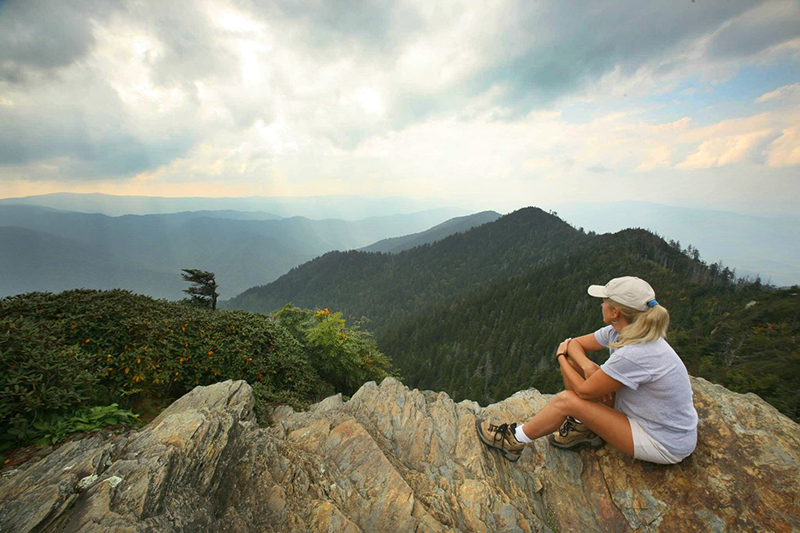 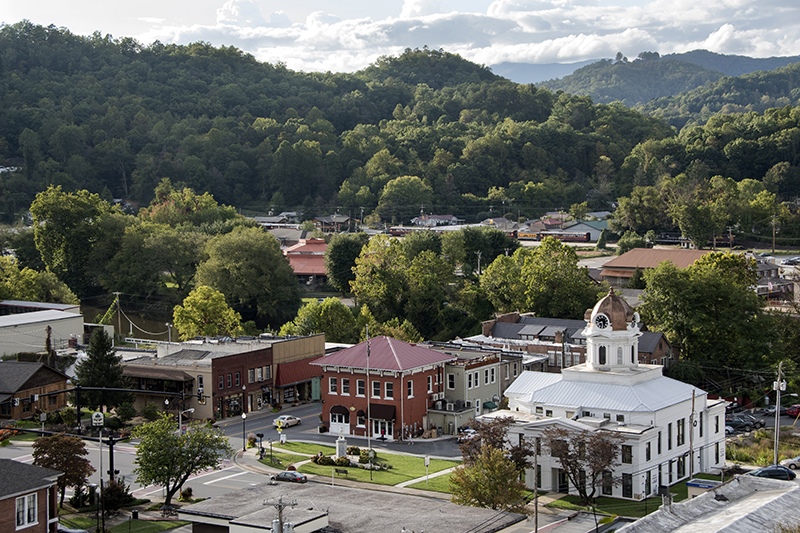 I can confirm. The corner my yurt occupies is mostly secluded by a curtain of red oaks and sugar maples that make me wish it were October instead of August. You can grill and eat out here, too, keeping in mind that space in the mini-fridge is limited: A small patio with a gas grill and picnic table adjoins stairs and flat rocks that lead down to a ring of rough-hewn Adirondack chairs around a firepit.

Around 7 p.m., in the dim light of the overcast day and before the rain starts, I take a seat and assess my surroundings. It’s 70 degrees, pure relief in summer. A light breeze rustles the oak and maple leaves. A few crickets chirp as my dog, nose to the ground, conducts reconnaissance. I can hear traffic from Highway 74 a few hundred yards away, but that’s a small distraction. This is nice.

At 7:20, I feel a faint sprinkle and decide to go in. The mist that gives the Smokies their name contributes to a sense of cocooning. By 9:30, as rain taps the roof and katydids scratch out insectoid white noise, my eyelids begin to sag. Lulled by the cool air and smells of the forest, I drift into deep, glampy slumber.

STROLL DOWNTOWN
The town of about 1,500 meets every expectation you might have of a pleasant stop in the Smokies: a compact downtown; a petunia-lined bridge over the gently flowing Tuckasegee River; breweries, including popular Nantahala Brewing Company; and the mist-shrouded hills that cradle it all.

HIT THE TRAIL
Great Smoky Mountains National Park, which covers 522,427 acres in western North Carolina and eastern Tennessee, is the most popular of the United States’ 61 national parks; 11.4 million people visited in 2018. The temperate climate allows hikers to roam the park’s 800 miles of trails year-round.

DRIVE (OR BIKE) TO NOWHERE
A never-completed federal road project has become one of the nation’s oddest tourist attractions. Some six miles northwest of Bryson City, winding and picturesque Lakeview Drive ends at a quarter-mile-long tunnel that leads to … nothing but woods and trailheads. It’s called the Road to Nowhere, and getting there is more than half the fun.

BRING BACK
The Chocolate Shoppe’s Tom and Carol Turek moved to North Carolina from Florida in 1998, having spent vacations in the mountain town. Six years ago, they came out of retirement to purchase a small confectionary on Everett Street, learned how to make chocolates, and now sell truffles, bark, buckeyes, brittles, and fudge, all made in-house—and 24 flavors of ice cream, too.

This article appears in the November 2019 issue of Charlotte magazine.