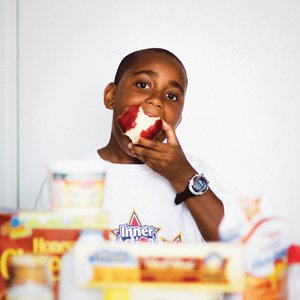 Langston Hines and his mom have learned what to buy at the grocery store and how to sneak vegetables into meals.

If your child's weight is a concern, sit them down for a one-on-one chat. "Ask them what they're eating for lunch at school. Find out if they are getting up during the night and eating," suggests pediatrician Traci Lamothe. "You can't be with them 24/7, so you need to ask." Once you have a rough idea of your child's diet, seek professional guidance; first step: get your child's body mass index (BMI) measured. If his BMI is greater than the eighty-fifth percentile of the national average for their age and height, he's overweight. If his BMI is over the ninety-fifth percentile, he is obese, in which case, ask your pediatrician for an immediate plan of action. "If we can even keep a child's weight the same, their BMI will naturally drop," says Lamothe. "They'll keep growing in height, but their weight will be the same, and they'll have a healthier BMI."

When talking with your child about obesity, focus on his habits rather than his size. Dr. Kristen Rager, director of adolescent medicine at Levine Children's Hospital, kicks off appointments with obese children by asking how they feel about their health. "That's a good question to start a discussion about lifestyle habits. I don't like to make it about the weight," she says. "Many different body types are healthy, and I don't want my patients to believe that good health equals being skinny." Once the child commits to a healthy lifestyle, the rest is up to the parents, who need to read nutrition labels carefully, to pack healthful school lunches, and to encourage exercise.

InnerAction! Program at the Presbyterian Center for Preventive Cardiology

Alarmingly, the 2007 TFAH survey predicts that today's children are likely to be the first generation to live
shorter, less healthy lives than their parents. Nationally, 25 million children are already overweight. Fortunately, childhood obesity can be controlled and combated. Through the eight-week InnerAction! Program, the Presbyterian Center for Preventive Cardiology teaches families about nutrition. The program is designed for children between the ages of eight and fourteen and costs $150 per child. Participants meet once a week for an hour to learn about healthy lifestyle choices. Nicole Martin, a health educator coordinator with Presbyterian Preventive, says that the program is all about having fun. "They don't have to be on the treadmill and be bored to tears to be exercising," says Martin. "We have them running obstacle courses, playing with exercise balls, doing the hula hoop. There's something for everyone to enjoy."

While the children jump and play, the parents attend a nutrition course. "We ask how often the parents let their kids splurge on doughnuts," says Martin. "Then we put several teaspoons of Crisco in their palm and ask if they would feed their child that.

It's a real ‘aha!' moment." Leticia Hines says the program has helped her and her son Langston, nine. "They taught me what products to buy, and actually gave us a list of food brands to avoid," says Hines. "They gave us good kids' recipes. My son doesn't like vegetables, so these recipes let me sneak vegetables in." A self-proclaimed vegetable hater, Langston now enjoys brown rice with squash and green peppers. "The recipes are really good," Langston admits. "It's hard to believe that they're really healthy!" For more information about InnerAction!, call Presbyterian Preventive at 704-316-3728.

According to a 2007 study by the nonprofit organization Trust for America's Health (TFAH), North Carolina has the fifth-highest rate of childhood obesity in the nation. In the Tar Heel State, 19.3 percent of children are considered obese, compared to only 14.8 percent nationally, and the five "fattest" states for children were all located in the South. Dr. Traci Lamothe, a pediatrician with Ballantyne Pediatric Associates, is hoping to change that through education. "The problem is about lifestyle and, luckily, that can be changed," she says. Many Southerners have a penchant for deep-fried fare, sausage gravy, and grits dripping with butter—delicious, but not very healthful. Parents are passing naughty noshing practices (and serious health risks) along to their children. "The hardest part about kids losing weight is getting the parents to change lifelong habits," says Lamothe. "The entire family needs to make changes."