The Panthers won't know until later this week if Cam Newton will be able to play Sunday, but everyone knows the quarterback they'll be facing.

More than 60 players were on the Panthers' practice fields Wednesday, but for 10 minutes, coach Ron Rivera was transfixed on one guy. As quarterback Cam Newton went through routes with his receivers, Rivera carefully studied his most important player. 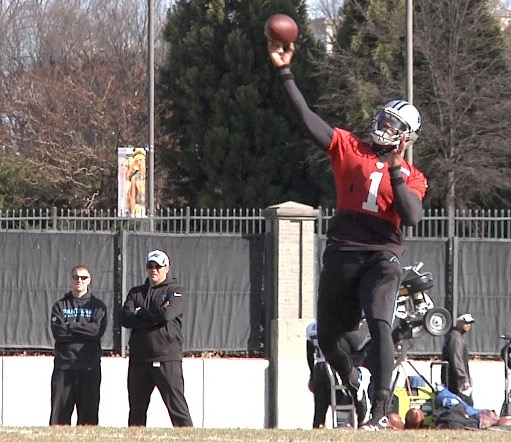 “He looked good. He threw the ball well. He threw a couple deep balls, a couple over 60 yards," Rivera said.

It was an incredible sight considering eight days earlier, Newton crawled out of his wrecked truck a couple blocks away from where he was now practicing. And somehow, he was flinging passes with what appeared to be his normal velocity despite two broken bones in his back.

Newton was expected to return to practice Wednesday, but no one was sure how he would look. For one day, he seemed ready to start this week's pivotal game against the Browns. But the Panthers will wait until at least Friday before they make that call.

While Carolina waits to decide on its starter, Cleveland has already said Johnny Manziel will get another shot. The rookie was abysmal in his much-hyped starting debut last week against Cincinnati. The Bengals, and many around the NFL — including media — very much enjoyed seeing the ultra-confident quarterback get his comeuppance.

When asked if he has noticed that many want Manziel to fail, Rivera smiled and said, "I do because we play him this week."

But that's likely the extent of the trash talk that will come from the Panthers this week. Rivera told his players to avoid making negative comments about Manziel, or do anything that may egg him on during Sunday's game. Even though he had a forgettable NFL debut, the 2012 Heisman Trophy winner could be capable of bouncing back in a big way.

“Johnny Football gets out there, Johnny Manziel is going to play the way he does," Rivera said. "Explosive playmaker, and that’s who he is. He’s got potential to be explosive and potential to make plays, and we don’t want to get into all that other stuff."

So Rivera will try to get his team to focus on football while he focuses on another huge decision regarding his quarterback.

Against the Bucs in Week 1, Rivera sat Newton, even though he wanted to play while recovering from broken ribs. A week later, he returned to lead the Panthers to a win over the Lions.

“I’m treating this a lot like we did going into Tampa Bay and then going into Detroit the next week," Rivera said. "And that’s obviously what this week reminds me of, is the week leading up to Detroit.”

While Newton is still no sure thing to play, a big clue to his status for Sunday may be found in how Rivera played those first two weeks. Barring a setback, Newton could be a decent bet to return for the Panthers' final playoff push.

Categories: Black and Blue Review 2, Panthers
Contest of the Month