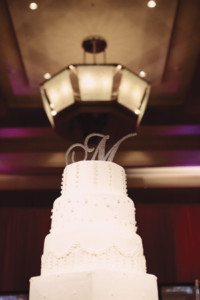 A five-tier, buttercream cake by the Ritz’s inhouse pastry chef was adorned with edible jewels. 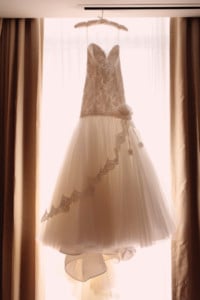 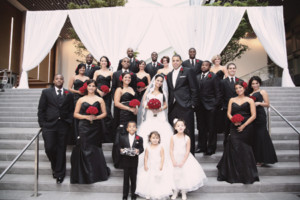 “I was in pure bliss and elated to be standing there in front of my best friend with all of our family and friends sitting there and seeing the happiness that is our great love,” says Grace. 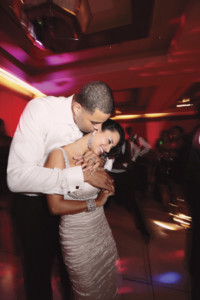 The bride changed into a Nicole Miller gown from J. Majors Bridal Boutique for the reception. 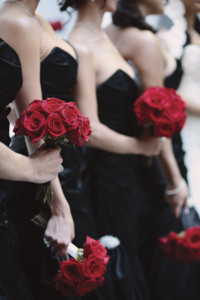 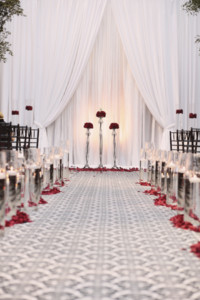 The couple chose the Urban Garden at the Ritz for their ceremony site.

The Place for Flowers designed the stunning red rose centerpieces. 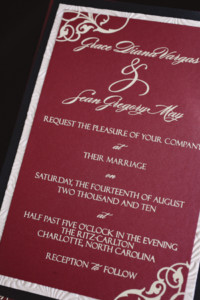 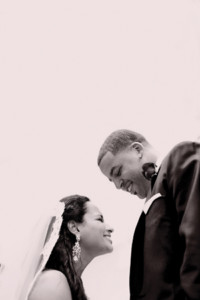 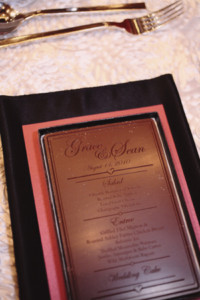 When Sean May, twenty-six, caught sight of his wife-to-be for the first time, the NBA star (and former Tar Heel) suddenly became shy and nervous. It was at a tavern near Time Warner Cable Arena, just after one of Sean’s games. “I was a bartender, and one of my co-workers came up and told me [Sean] wanted me to be his girlfriend,” remembers Grace Vargas, twenty-six. “We exchanged numbers and began texting.” On Valentine’s Day two years later, during a romantic Miami getaway, Sean proposed.

The couple chose the Ritz-Carlton Uptown’s Urban Garden for their ceremony and the grand ballroom for their reception. Grace wore an ivory, trumpet-shaped Lazaro gown with beading and crystals specially added. “I love anything that shines; it doesn’t have to be diamonds,” says Grace, who studded her red-themed décor with sparkles. With the help of Weddings and the City, she placed rhinestone broaches and chains in her bridal bouquet of red roses by The Place for Flowers so it appeared to be dripping sparkles, and she adorned her five-tier buttercream cake by The Ritz’s pastry chef with edible jewels.

The pair envisioned a joyful night—tearing up the dance floor with family and friends to tunes by Split Second Sound DJ—and their 215 guests did not disappoint. The dance floor actually began to break apart at the seams a few hours into the celebration, but the party didn’t stop there. “After our reception, we took our closest friends to our favorite club in Charlotte, Suite, where we had bottles of champagne waiting for us in the VIP area,” Grace says. “We wanted to milk the night with our friends for all we could.”