How To: Choose an Antique Engagement Ring

An antique engagement ring, not otherwise passed down traditionally within the family, is particular in its own right. The intricacies of design far surpass many of the mainstream motifs seen today, making any given antique ring exceptionally specific in style. The antique engagement ring is meant for the ornate woman. Those who prefer a minimalist setting will likely favor a newer design. For the discerning woman and aficionada of vintage things, the antique ring is a winning choice. Nonetheless, standard diamond stats aside, there are a few key factors to consider when choosing an estate piece. From era design elements to the necessary paperwork, we'll break down all the specifics for you. 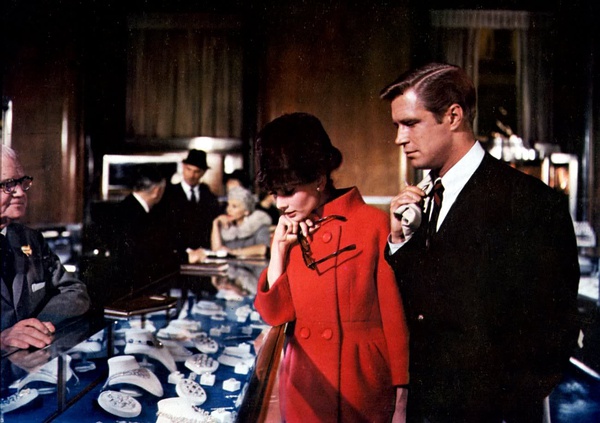 Audrey Hepburn and George Peppard in Breakfast at Tiffany's

The term antique constitutes those pieces made at least 100 years ago. However, 1920s jewelry is classified as antique to a vast majority as well. Estate simply means the piece has been previously owned. Just because a ring is classified as estate does not necessarily mean it's antique. Pieces made prior to the mid-1800s are not often seen outside museums and auction houses.

Each era has its own set of distinct design elements. From rose gold to geometric shapes, aesthetic preferences can dictate which era within which you should shop. Sometimes jewelers have replaced a stone while the mounting remains authentically antique. These are all specifics to be provided in the gemologist report (which we will discuss below).

(1714-1837) These rings were fashioned during the reign of King George I-IV until William IV. With limited diamond resources during this time, design focus was on maximizing light reflection for optimal brilliance. Butterflies and flowers were common for band design, as well as other elements of nature, such as doves and wheat stalks. Georgian rings donning personal initials were most likely memorial rings, another popular trend of the period. Locket rings were also worn by many of the women. Typical wedding rings had Olde English love sayings on the interior of a plain gold band. Occasionally foil was placed below the diamond to increase the reflection of light. Substantial sized diamonds were extremely popular during the Georgian Era.

(1837-1901) These rings were created, not surprisingly, during the time of Queen Victoria's coronation until her death. With the discovery of gold mines in California, this meant easy access to precious metals. Rose and yellow gold were highly popular during the Victorian era. Diamond-set flowers and intricate filigree work were ever-popular, as were emeralds–the Queen's birthstone. Mine cut (meaning an extra row of diamonds along the bottom of the stone was used frequently in design as well. Again, with nature retaining its influence in design, snakes and berries were often incorporated into settings also. 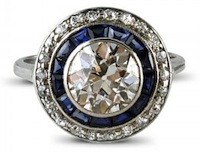 (1901-1910) Rings from the Edwardian Era were fashioned during the brief reign of Edward VII. The popular metal of this period was platinum. Diamonds were the stone of choice, and open, collet settings maximized light reflection and brilliance. Calibre cut (square or baguette) was frequently used around central stones. Scrollwork as well as ribbon and bow motifs were popular during this period as well.

(1920-1930) The Art Deco Era brought about an entirely new design aesthetic. After the discovery of King Tut's tomb, an Egyptian design inspiration sparked heavy use of geometric shapes. Angular cuts such as triangular, baguette and marquise became very popular while longstanding traditional cuts remained in production as well. Sapphires, rubies and emeralds were frequently paired with diamonds in ring settings, but diamonds definitely took center stage. This design era reflected the glitz and glamour of the roaring twenties, and ended just before the Second World War ensued.

A Gemologist Report is an absolutely essential prerequisite for purchasing an antique ring. This report will detail proof of the ring's value as well as validation of the year in which it was produced. Clarity, cut, color and carats will also be included in this document. Reading and understanding the gemologist report will help you be able to verify the stone is of the value and quality the owner claims it to be.

Aside from era knowledge, a basic knowledge of diamond stats will remain important in choosing your ring. The 4 C's make up the basics of such knowledge. Cut, not to be confused with shape, refers to the outer appearance of the stone. Cut determines the way the diamond will reflect light. Since cut can compensate for things such as color or size, it is often considered the single-most important factor of the four C's. Carat measures the weight of the stone. 1 carat is equal to 200 milligrams. Color is graded from D (colorless) to Z. Differences between grades in this category are subtle, so they are graded in controlled lighting using a master diamond set for comparison. Also it's important to note that antique diamonds tend to have a colored tint such as yellow. Clarity refers to the inclusions present in a diamond. These are naturally-occurring flaws within the diamond not present to the naked eye. Grades in this category range from F (flawless) to I (included). This grade should also include where within the stone such inclusions are located.