Whitney Sturge oversaw the renovation of nearly every room in her clients’ two-story colonial in Barclay Downs before she tackled the lounge on the main floor. As the project evolved, they opened up the two doorways to the room and added arches, which made the space more of a focal point. The homeowners, who have three young children, wanted to turn it into a lounge where the husband could unwind after work and watch TV. “We put a bunk room in the basement and lots of spaces where the family could hang out,” Sturge says. “This was supposed to be his space, but it turned out to be everyone’s favorite room.”

PUNCH IT UP
The room was the same greige as the rest of the house. “It was a pass-by room,” Sturge says. “You just didn’t notice it.” She painted the walls and ceiling in Benjamin Moore’s New Providence Navy to match the homeowners’ blue leather sofa and give the room a dark, moody feel. A light gray sisal rug keeps the room from feeling too cave-like, and sheer drapes admit plenty of light. 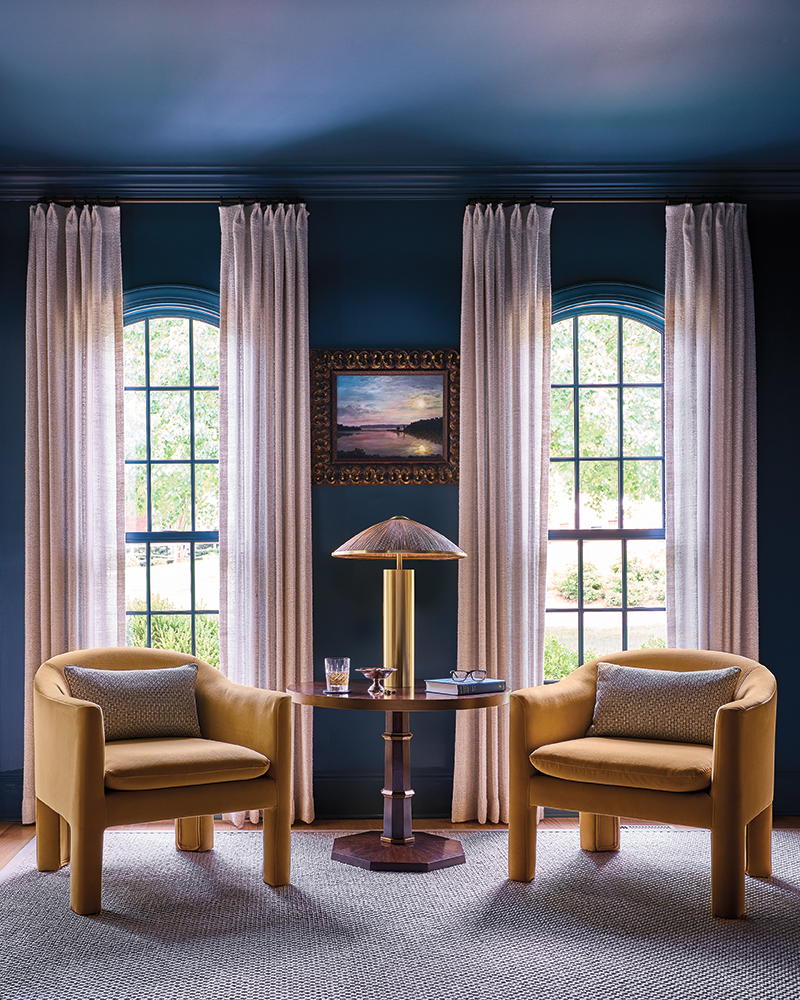 HIS & HERS
Sturge wanted the lounge to appeal to the wife’s taste as well, so she framed a vintage Hermès silk scarf and displayed it above the blue couch. She found the gold sconces, circular burlwood side tables, and hammered gold lamps from Slate Interiors. The yellow velvet chairs came from Target, and Sturge reupholstered the ottomans in a Champagne patterned fabric to complement pops of gold throughout the room. “I didn’t want it to be super dressy or formal, but not like it’s just a regular family room, either,” she says. “It’s not a big room, so we had to arrange it in a way that made it feel cozy but not too tight.”

OPPOSITES ATTRACT
Sturge says the biggest challenge with this project was making so many different styles work cohesively. The homeowners wanted to incorporate their antique pieces and family heirlooms, so Sturge filled in the remaining spaces with more modern accents. “It’s all about the contrast,” she says. “Mustard against blue, leather against hammered gold, masculine versus feminine. … It’s a great balance of traditional and contemporary.”