From near and far, couples come to get hitched in the domain of The King 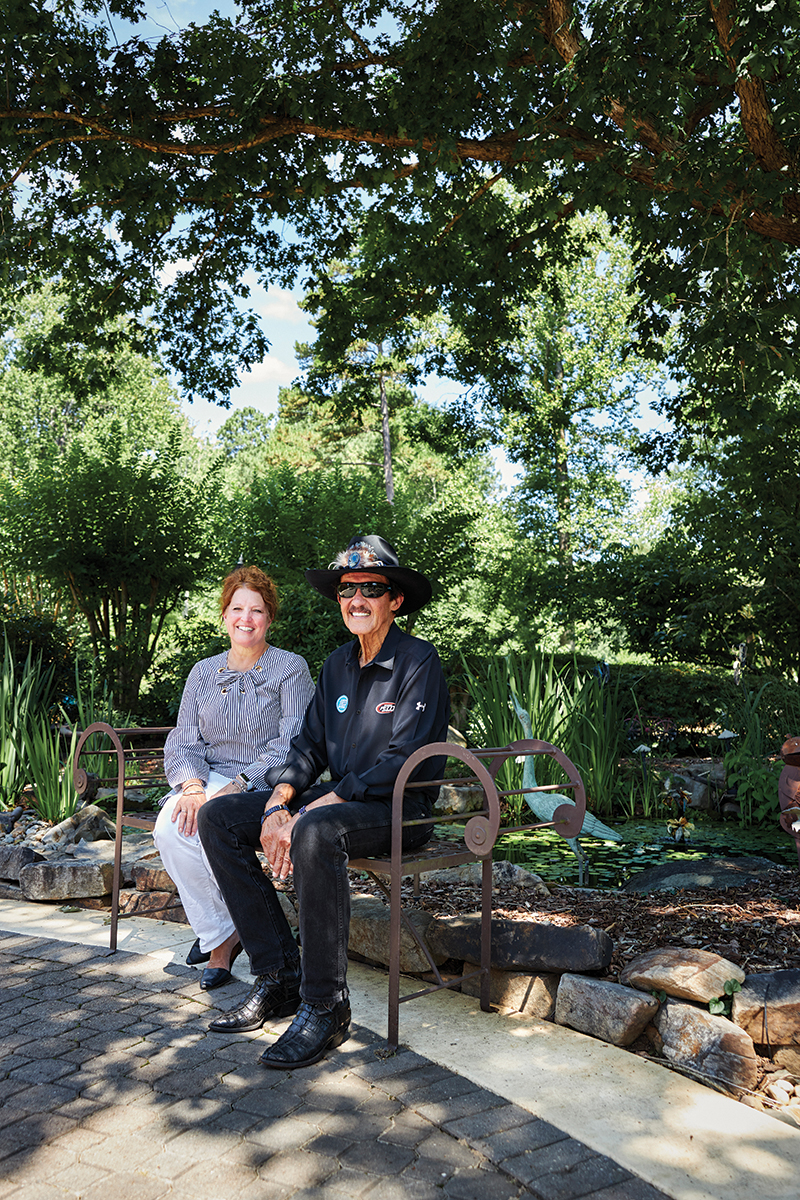 Sharon Petty Farlow with her father, Richard Petty, at the family’s home and wedding venue, Reverie Place in Randleman.

MORE OFTEN THAN NOT, couples drive past the brass-colored “P”s that intertwine with the bars of the wrought-iron entrance gate to Reverie Place without a second glance. Most times, they won’t notice “PETTY” cut out in stencil on the metal benches near the pavilion where receptions are held, either.

Sometimes they’ll look past the “Do Not Enter” signs to gaze at the one-story tan and brown dwelling down the path and ask Sharon Petty Farlow, “Who lives in that house?”

“And they never put it all together,” Farlow says. “They have no clue. They just are looking on Wedding Wire or The Knot or they Google ‘wedding venues in Randolph County,’ and they like the pictures.”

More than you’d expect, couples who have their weddings at Reverie Place don’t realize that they’re getting married on the property of the greatest NASCAR driver of all time, “The King”—Richard Petty.

“I never have anybody say to me, ‘We’re determined we’re going to get married here because this is Richard Petty’s property,’” says Farlow, one of Petty’s daughters who manages event bookings at Reverie Place.

Maybe it’s because there are no signs of race cars or driving paraphernalia in sight at the Randleman property, about a 90-minute drive from Charlotte and just south of Greensboro. The manicured lawn, green pastures, white fences, and picture-perfect red barn in the distance don’t exactly scream NASCAR. Occasionally, one of the longhorns wanders into the fields. Visitors don’t hear the roar of engines or smell of gasoline and tires—only majestic trees that line the edge of the property and the sweet, earthy scent of grass and flowers.

Petty is pretty hands-off on the whole venture, and isn’t even on the property most weekends when weddings are scheduled. Summer weekends are when NASCAR holds races, and The King—who accumulated a record 200 NASCAR Cup Series victories and seven championships in a racing career that ended in 1992—is usually at a track somewhere managing his team, Richard Petty Motorsports.

“As long as they don’t come in the house, I’m OK,” Petty says, smiling beneath his trademark black cowboy hat and dark sunglasses as he strolls near the pavilion.

Over the last few years, the 82-year-old Petty—still slim as a twig and quick to crack a joke and a grin—has been around for maybe three or four weddings.

Farlow is the one who manages the rental and upkeep of the facilities on the 500-acre property, a task she took on four years ago when she retired from her job as a kindergarten and first grade teacher.

The idea to offer the property for weddings happened organically. Not long after Petty and his late wife, Lynda, bought the property in 1969, family members began holding events there because of its rural beauty. Baby showers, birthday parties, class reunions, and yes, sometimes weddings all found homes among the green fields.

Every year for as long as they can remember, the family has held a Republican Party fish fry—the conservative Petty once lost a bid for North Carolina Secretary of State in 1996—that 700 to 800 people attend. But four years ago, the Petty family realized this might be something that others would enjoy using for events, too.

“We look at it as a way of sharing it,” says Farlow, whose two daughters were married on the property. “We know we have something really pretty and special here, and we’re honored people want to come on our property and have an event.”

April and May are the busiest months, Farlow says, with September and October close behind. Those months rarely have a free weekend. July and August are the scorchers, when not many want to get married at either of the two available sites, both outdoors: the Lynda Petty Memorial Garden—named in honor of Petty’s wife, who died in 2014—or on the lawn in front of a small lake by a log cabin.

The garden is an oval-shaped, shrub-lined area with a fountain and fire pit at one end and an arbor at the other. Couples usually exchange vows under the arbor, while the lake setting is alongside an 1800s log cabin that Richard and Lynda Petty bought years ago in the North Carolina mountains and reassembled on their property for their own retreat. Now, the cabin can be rented for the weekend or used by brides to prepare for their wedding ceremonies. 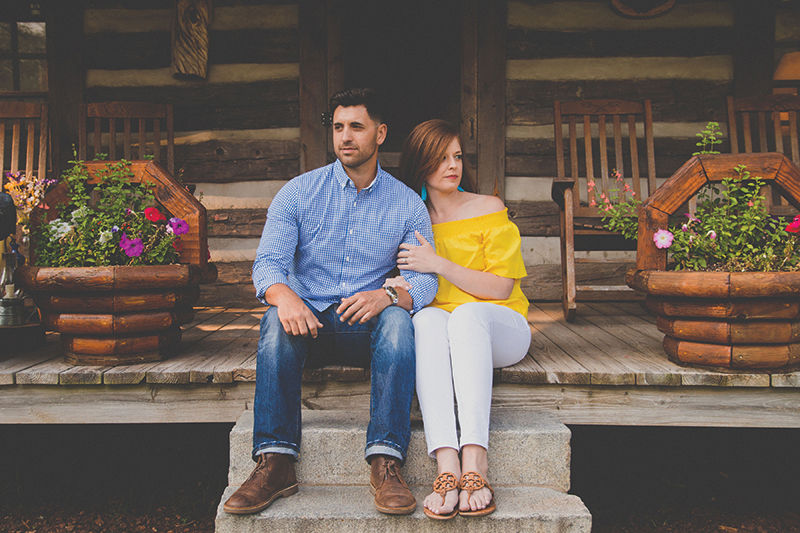 Reverie Place offers packages that range from $1,800 (for ceremony or reception) to $5,000 (for rehearsal dinner, ceremony, and reception). According to Wedding Wire, the average cost of a wedding ceremony and reception venue in North Carolina is about $4,500. Farlow says she’s learned about details like pricing and care of the facilities through experience.

“When I go to a wedding now, I’m noticing more things than just the bride and the groom and the food,” she says. “I’m noticing how they set it up, all the little things.”

None of it is exactly a retirement plan for Petty, who remains active with NASCAR.

“He doesn’t do any retirement things,” Farlow says. “Racing is his life. Everything he does, from the minute he gets up until he goes to bed at night, is pretty much revolved around racing.”

So don’t expect Richard Petty Weddings to incorporate anytime soon. Farlow estimates only about 60 percent of the couples who get married at Reverie Place even know who the famous owner of the property is, anyway.

The other 40 percent? Petty just likes to see them having a good time.

“As long as he’s living in that house, he doesn’t mind that all this is going on here,” Farlow says. “He loves the property and he loves his land, and he enjoys seeing people enjoy it. He loves it when there’s a party out here.”

WHAT’S IN A HAT?
The King is rarely seen without his crown, a.k.a. a custom cowboy hat. Richard Petty unveiled this signature look after two different sponsors requested he wear their promotional hat. Instead of choosing between the two, he put on a cowboy hat. Hatco in Garland, Texas, tailors all of Petty’s hats. According to the company, about 100 people touch each one to ensure it’s perfect before Petty puts it on.

ROYAL FAMILY
The first Petty to race was Lee Petty, Richard’s father. Lee won the NASCAR Grand National Series three times in the 1950s and the inaugural Daytona 500 in 1959. Richard’s son, Kyle, won the Coca-Cola 600 in 1987, and Kyle’s son, Adam, was a rising professional driver until his death in a crash during a practice session for the Busch 200 race in 2000.

RICHARD THE ROMANTIC
For many, Lynda Petty was the first lady of stock car racing; she was well-loved in the NASCAR world and beyond. Lynda and Richard were high school sweethearts and married when Lynda was only 17. Lynda died at 72 in 2014 after a long battle with cancer. The pair would have celebrated 61 years  of marriage this year.

24 Charlotte Pizzas You Must Try