Through more than five decades, the spot has served the famous and humble fried squash and other delectables from fresh its farm

If you weren’t near the intersection of Monroe and North Wendover roads on the afternoon of Saturday, Jan. 23, you missed a beautiful sight. A line of people stood along Wendover in front of Gus’ Sir Beef, one of Charlotte’s iconic diners, and cheered and released balloons as a funeral procession passed.

Calliope Bacogeorge, 88, who died Jan. 17 of complications from Alzheimer’s disease, was on her way to her final resting place beside her husband, Gus Bacogeorge, in the Greek section of Evergreen Cemetery. Calliope—pronounced CAL-ee-oh-pee—usually went by Clara. She was also known as Mama Gus, the wife and hardworking partner of the late Constantine “Gus” Bacogeorge, owner of Gus’ Sir Beef. “She was as much a part of this as Dad was,” says their son Thrace Bacogeorge, 55, who grew up working in Gus’ and has run it since 2000 with help from his brother, George, 58. “It was their legacy.” 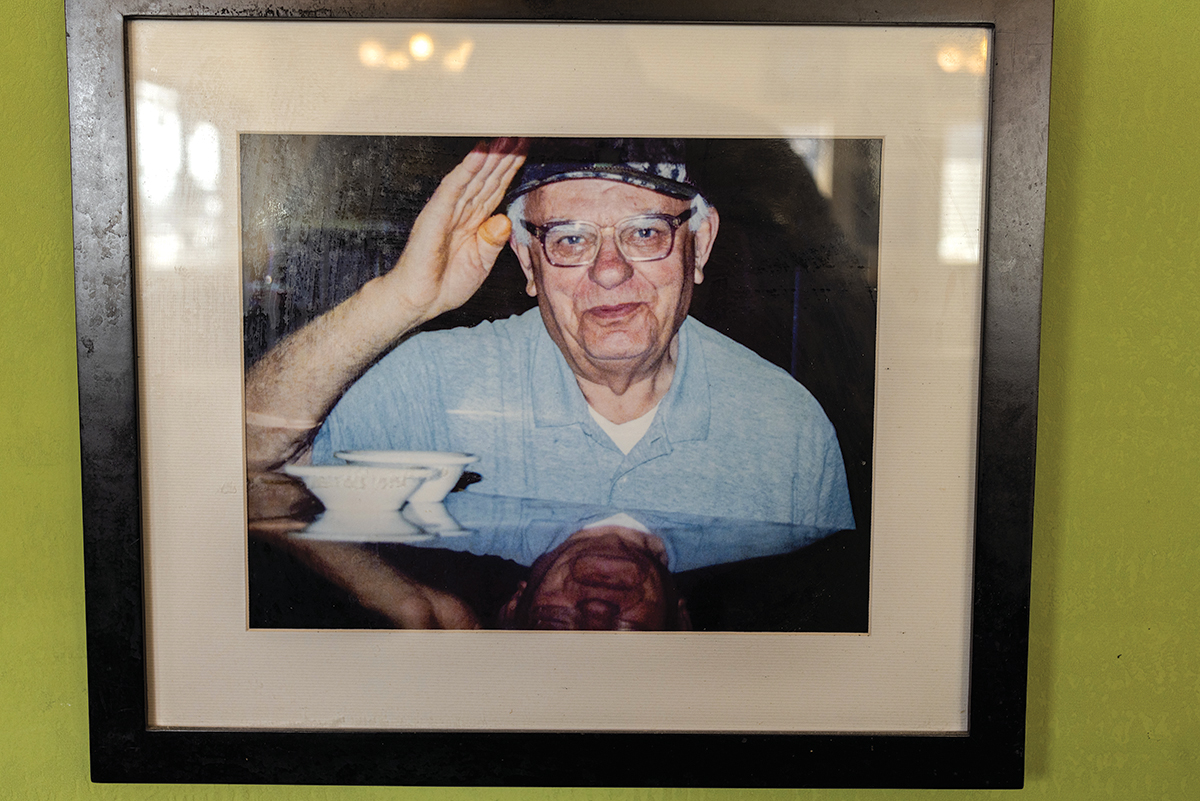 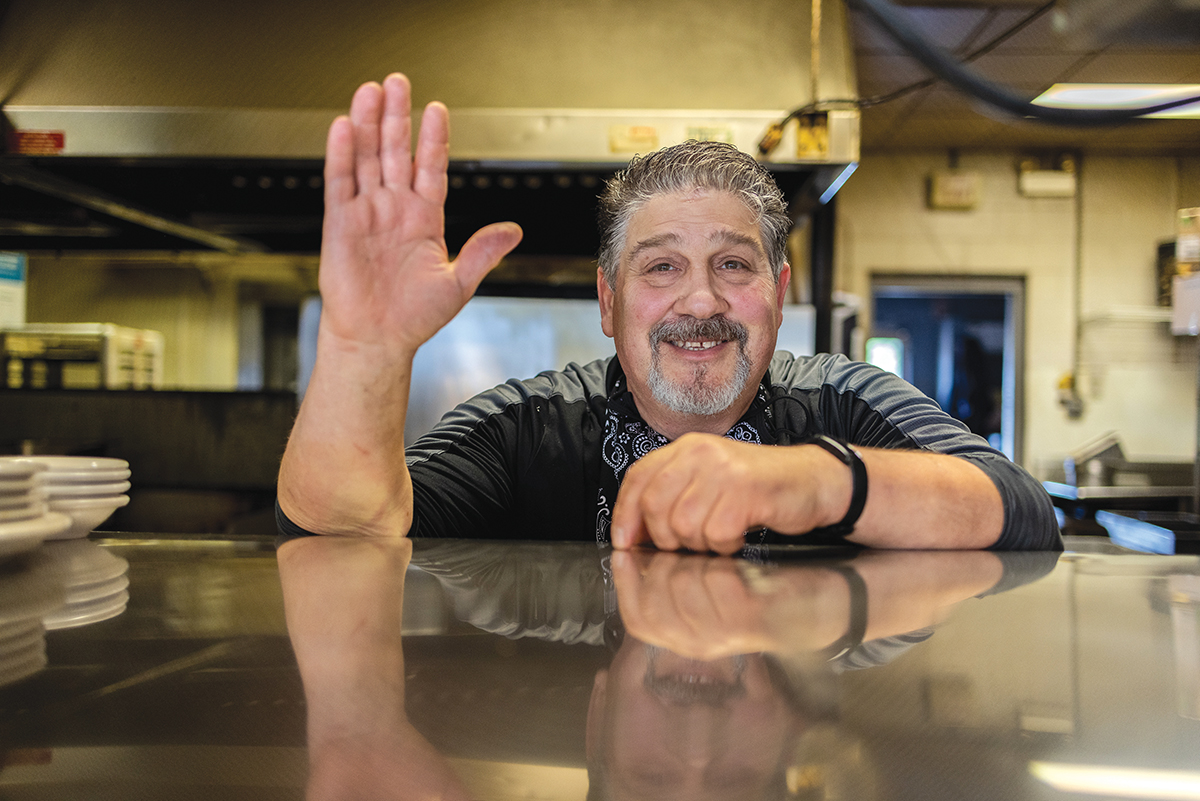 There are so many things to know about Gus’. There’s that slogan, “Fresh My Farm,” Gus’s  Greek-accented way of saying he grew a lot of the vegetables he served. There’s the fried squash (seriously, who goes without getting fried squash?), with a golden crust that clings to soft, hot circles of yellow summer squash. (Thrace is bound by a family contract never to reveal the recipe. We are bound to suggest you get a side of ranch for dipping.) Thrace calls the most popular order “13-7-11” from the daily specials menu: beef tips, collards, and fried squash.

There are the legends, like the time in 1991 when Elizabeth Taylor came to Gus’. She was at Carolina Place to promote her White Diamonds perfume and told police officer Dennie Crowder, who was moonlighting as her security guard, that she wanted fried chicken. Crowder took Liz and her seventh husband, Larry Fortensky, straight to Gus’.

Lines at Gus’ used to wrap around the building. Charlotte royalty, from WBTV star Fred Kirby to businessmen like Hugh McColl and Ed Crutchfield, stood in that line. Professional wrestlers like Dusty Rhodes, Ric Flair, and Ricky Steamboat crowded into a corner booth after shows. Even André the Giant, the cliff-climbing colossus in The Princess Bride, came by one night, so big he had to duck to get through the door. “Dad couldn’t contain himself,” Thrace remembers.

Like so many Charlotte restaurant stories, from the Open Kitchen’s to the Landmark Diner’s, the Sir Beef story started in Greece, where Gus was born. (Calliope’s parents came from the island of Patmos, but she was born in Mississippi and raised in Wilmington, where her parents co-owned the Crystal Pier, now known as the Oceanic, in Wrightsville Beach.)

Orphaned by age 11, Gus grew up to be a police officer in Athens. But his real ambition was to come to America, which he did in the 1950s. He bounced from New York to Washington before a cousin told him in 1957 to move to Charlotte. “Three hundred bucks in his pocket,” Thrace says. “He lived the American dream.” 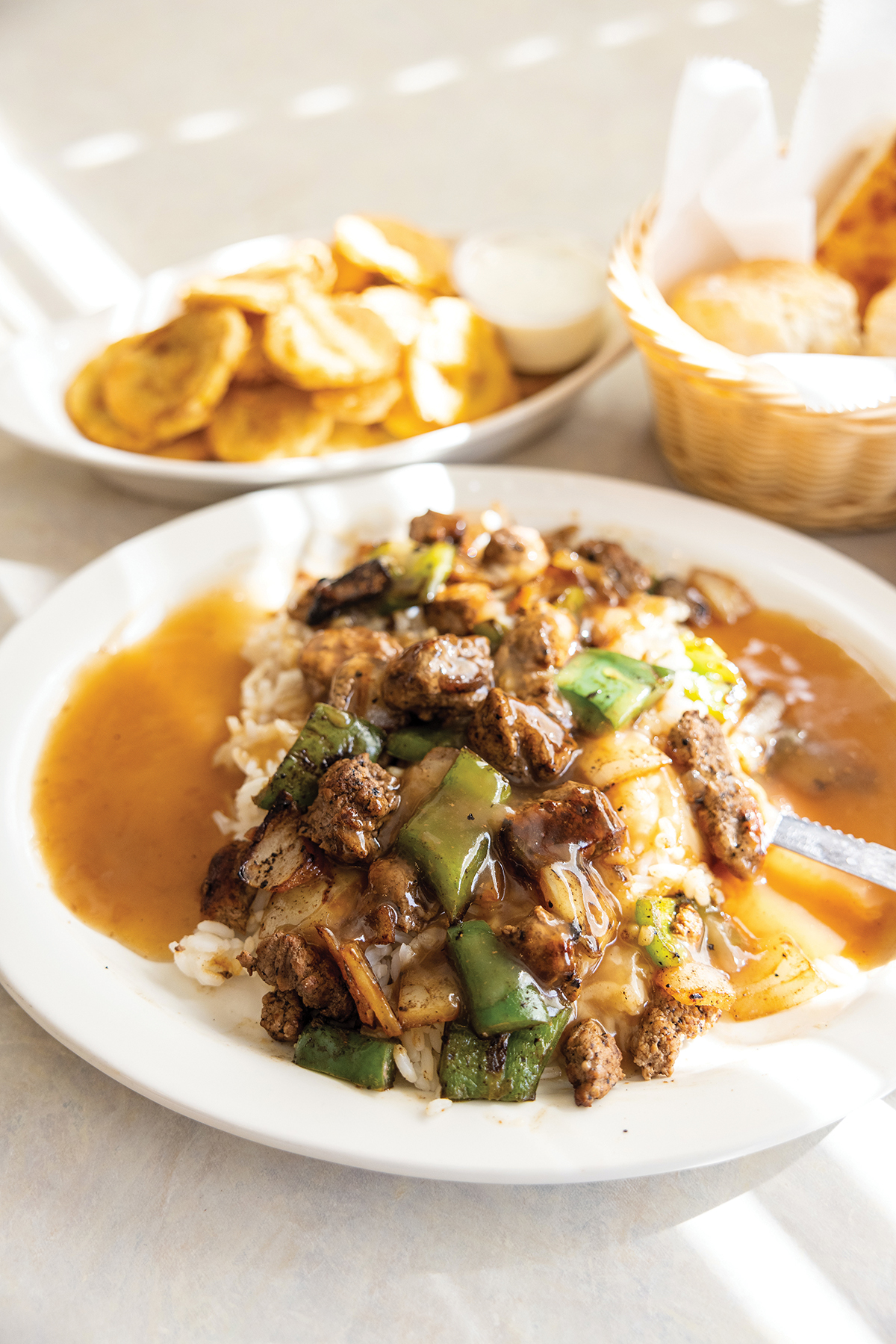 (Above) Beef tips with fried yellow squash and a basket of biscuits. (Below) Fried chicken with mashed potatoes and a side of black-eyed peas. 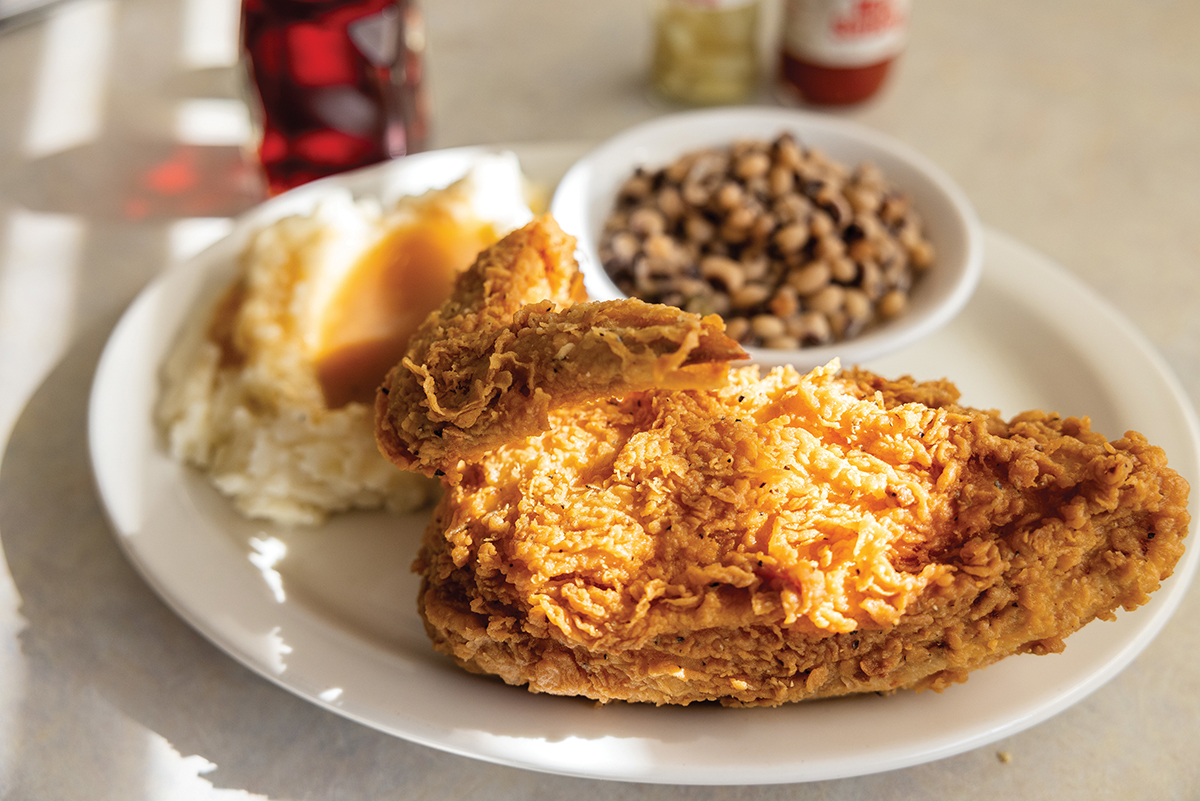 In Charlotte, he met John Couchell (father of George Couchell of Showmars), who had a popular steak restaurant, Johnny’s, across from where Sir Beef is today. He eventually bought out Couchell, and the Bacogeorges ran it until 1967, when a fire destroyed part of the building.

The city planned to widen Monroe Road, so rather than rebuild, the Bacogeorges bought a lot across the street and opened the original Gus’ Sir Beef in 1969. At first, the menu was similar to Johnny’s: steaks and fries, and Americanized classics like spaghetti and pizza (pizza is still painted on the outside of the building, but they stopped serving it 9 years ago). Then, in the early ’70s, a customer told Gus there was a market for fresh Southern-style vegetables that weren’t flavored with meat or meat drippings. Gus started buying fresh produce from local farms.

“My dad was probably the first farm-to-table restaurant in town,” Thrace says. By 1972, Gus had bought 18 acres on Hargett Road and started his own farm, growing squash, okra, and five kinds of greens. He had a rule: only fresh vegetables. (The exception is beets—Gus thought canned beets were best for marinating.) Of course, vegetables are seasonal, so there’s a code on the menu: “Fresh My Farm” is grown at the farm; “local fresh” is sourced from another local farm; and “farm fresh” means it came from a farm farther away, usually in South Carolina.

Thrace earned an engineering degree from N.C. State and worked for several companies before he came back to run the original location in 2000, working with his parents until Gus died in 2010. Gus’ has had five locations over the years, including a wildly popular one in Latta Arcade uptown, which George ran from 1992 to 2006. Building repairs and an increase in rent led that one to close. 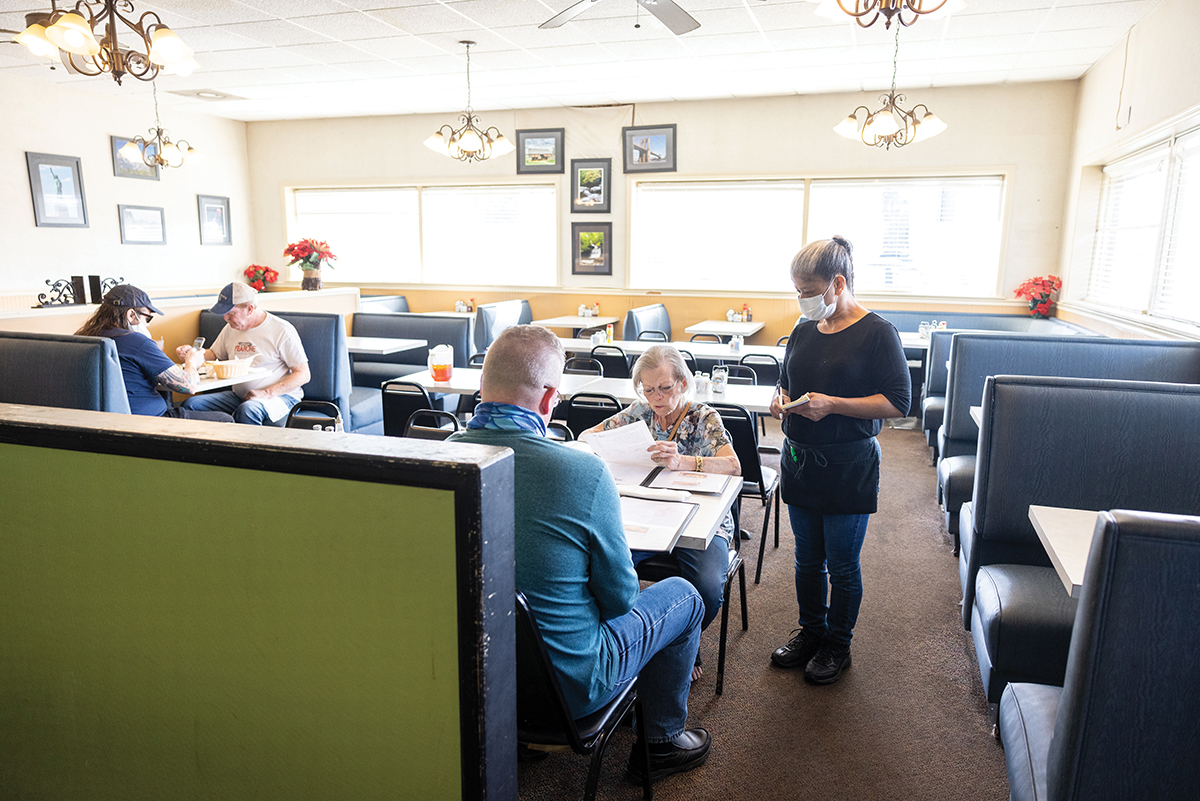 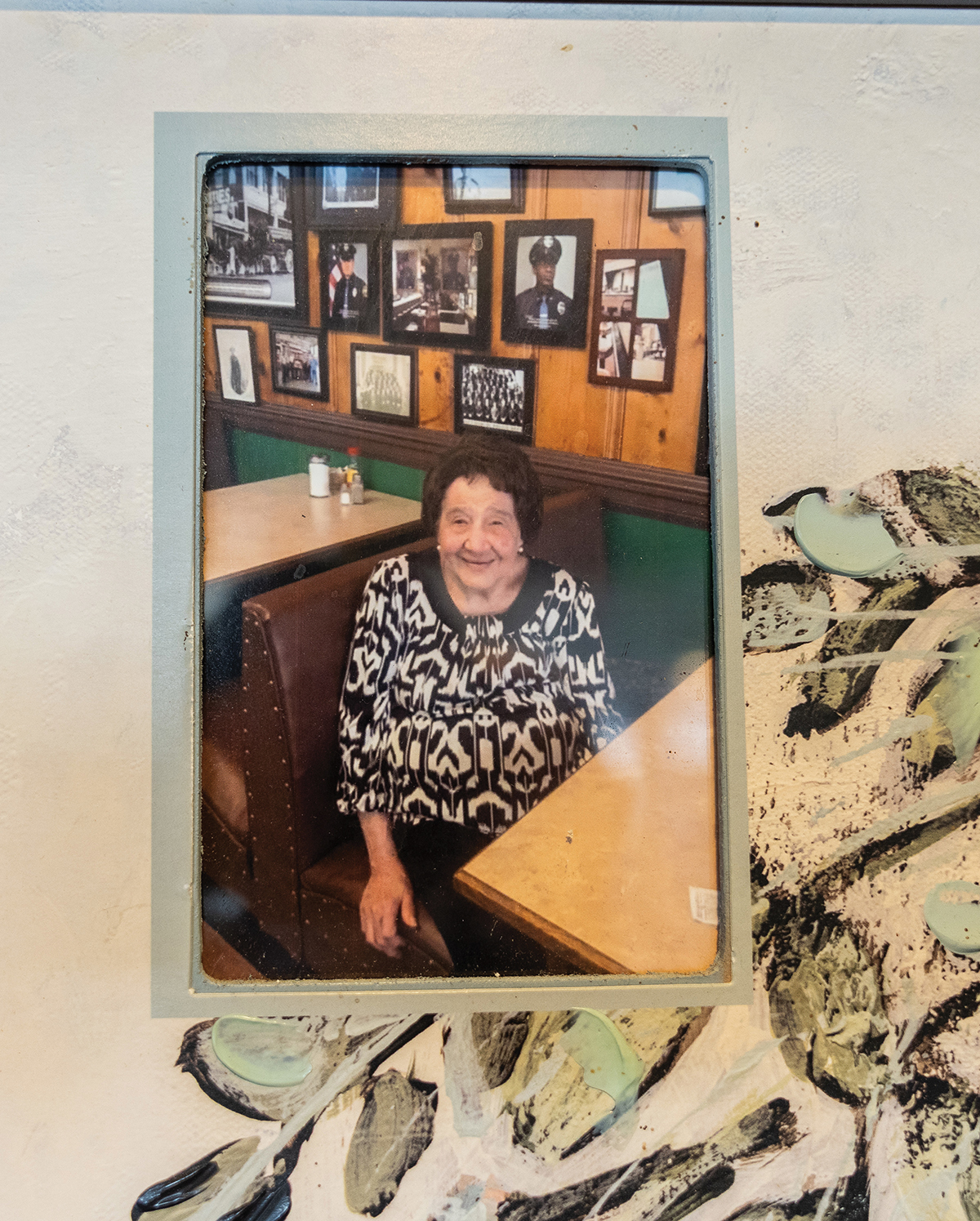 It’s true that Gus’ has seen better days. The drop-tile ceiling has water stains from leaks in the roof, and most of the blue vinyl booths have tears in the seats. Thrace plans repairs but had to focus on caring for his mother until her death. COVID-19 has cut down on their customers, although people in the area who work at home often trickle in for lunch as late as 3 or 4 p.m.

Peg Robarchek, a novelist who recently retired from her job as director of communications at First Presbyterian Church, has eaten at Gus’ since she moved to Charlotte in 1980. She returns to Gus’ because it reminds her of an earlier Charlotte that was packed with Greek-owned diners—and, she says, it tastes like the garden vegetables her grandmother cooked: “You can taste ‘Fresh My Farm.’”

Her regular order? Fried chicken. “But I’m also a veggie plate fan,” she says. “Give me some fried okra. Fried squash—that goes without saying. Pinto beans. Pile up the stuff we shouldn’t eat.”